Kubernetes is a container orchestration platform that enables its users to deploy and scale their microservice applications at any scale: from one service to thousands of services. Unleashing the power of Kubernetes is often more complicated than it may initially seem — the learning curve for application developers is particularly steep. Knowing what to do is just half the battle, then you have to choose the best tools to do the job. So how do Go developers create a development workflow on Kubernetes that is fast and effective?

In this tutorial, we’ll set up a development environment for Kubernetes and make a change to a Golang microservice. Normally to develop locally, we’d have to wait for a container build, push to registry and deploy to see the effect of our code change. Instead, we’ll use Telepresence to see the results of our change instantly.

For our example, we’ll make code changes to a Go service running between a resource-intensive Java service and a large datastore. We’ll start by deploying a sample microservice application consisting of 3 services:

Note: We’ve called these VeryLarge services to emphasize the fact that your local environment may not have enough CPU and RAM, or you may just not want to pay for all that extra overhead for every developer. 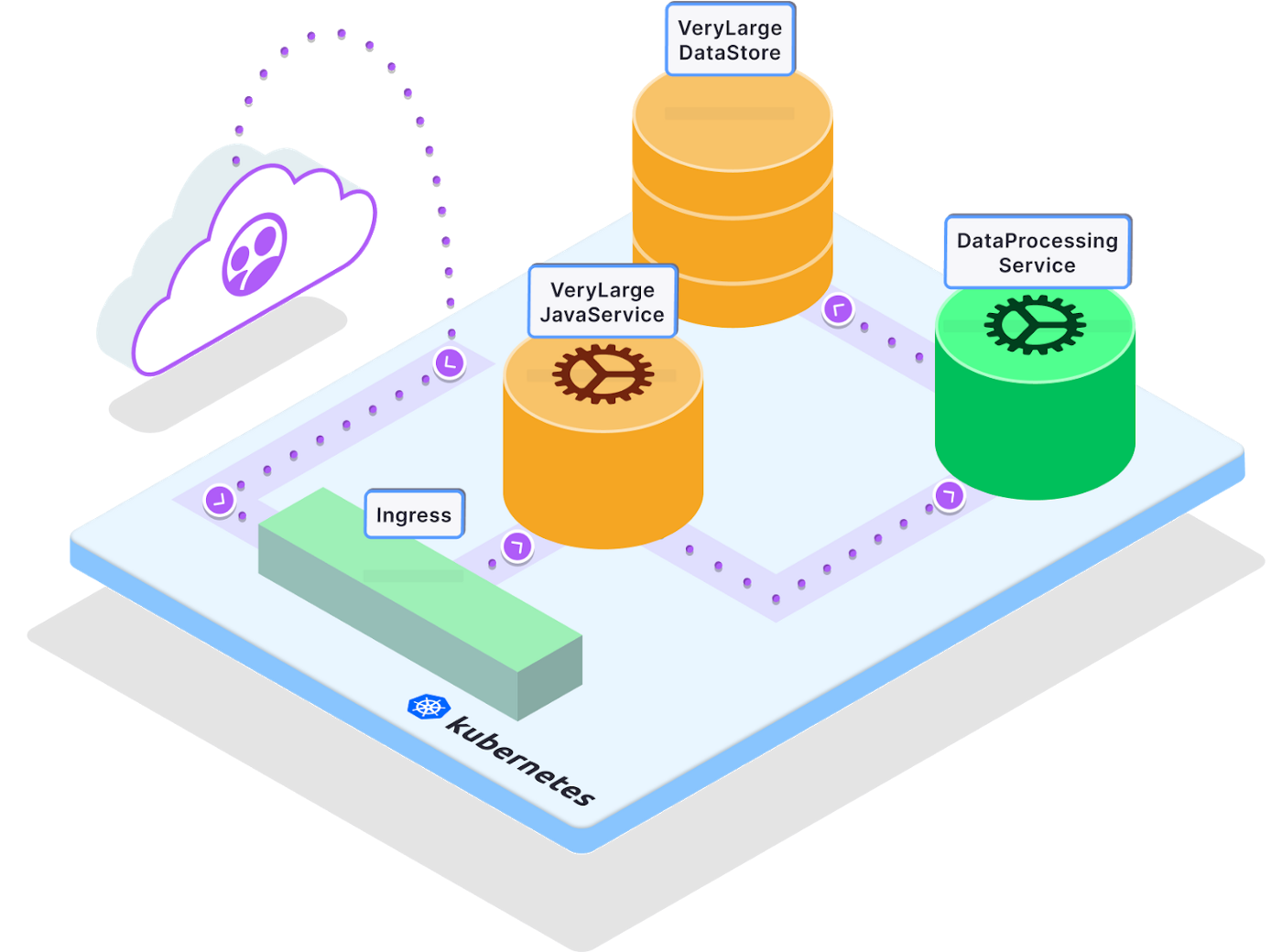 In this architecture diagram, you’ll notice that requests from users are routed through an ingress controller to our services. For simplicity’s sake, we’ll skip the step of deploying an ingress controller in this tutorial. If you’re ready to use Telepresence in your own setup and need a simple way to set up an ingress controller, we recommend checking out the Ambassador Edge Stack which can be easily configured with the K8s Initializer.

Let’s deploy the sample application to your Kubernetes cluster:

We’ll need a local development environment so that we can edit the `DataProcessingService service. As you can see in the architecture diagram above, the `DataProcessingService` is dependent on both the `VeryLargeJavaService` and the `VeryLargeDataStore`, so in order to make a change to this service, we’ll have to interact with these other services as well. Let’s get started!

1. Clone the repository for this application from GitHub.

2. Change directories into the DataProcessingService

5. In another terminal window, curl localhost:3000/color to see that the service is returning blue.

3. Test Telepresence by connecting to the remote cluster

4. Send a request to the Kubernetes API server:

Great! You’ve successfully configured Telepresence. Right now, Telepresence is intercepting the request you’re making to the Kubernetes API server, and routing over its direct connection to the cluster instead of over the Internet.

2. Access the application directly with Telepresence. Visit http://verylargejavaservice:8080. Again, Telepresence is intercepting requests from your browser and routing them directly to the Kubernetes cluster.

That’s it! With Telepresence we saw how quickly we can go from editing a local service to seeing how these changes will look when deployed with the larger application. When you compare it to our original process of building and deploying a container after every change, it’s very easy to see how much time you can save especially as we make more complex changes or run even larger services.

Today, we’ve learned how to use Telepresence to rapidly iterate on a Golang microservice running in Kubernetes. Now, instead of waiting for slow local development processes, we can iterate quickly with an instant feedback loop and a productive cloud native development environment.

If you want to learn more about Telepresence, check out the following resources:

In our next tutorial, we’ll use Telepresence to set up a local Kubernetes development environment and then use Delve to set breakpoints and debug a broken service. To be notified when more tutorials are available, make sure to check out our website or follow us on Twitter.

Published at DZone with permission of Peter ONeill. See the original article here.