We strive to make our APIs accessible to anyone on any platform: ReST, HTTP and JSON mean that from nearly any language on nearly any hardware, you can call any of our APIs. However, to be truly useful on many platforms, it helps to have a client library -- one that packs a lot of functionality like handling auth, streaming media uploads and downloads, and gives you native language idioms.

Today, we are announcing General Availability of the Google APIs Client Library for .NET.

This library is an open-source effort, hosted at NuGet, that lets developers building on the Microsoft® .NET Framework to integrate their desktop or Windows Phone applications with Google’s services. It handles OAuth 2.0 integration, streaming uploads and downloads of media, and batching requests. For more than fifty Google APIs, it is the easiest way to get access for any Windows developer. Whether you are plugging Google Calendar into your .NET Framework-based application, translating text in a Windows Phone app or writing a PowerShell script to start Google Compute Engine instances, the Google APIs Client Library for .NET can save you tons of time.

Want to try it out? Visit the Getting Started tutorial. Want to hear more about about using Google’s services from .NET? Follow the Google APIs Client Library for .NET blog here. [GD: Post leached in full]

google-api-dotnet-client Announcements - Announcing the release of 1.8.1

Did you notice we have dropped the beta and rc labels out from this release?

Thanks for all your help and support getting out of beta!

From today, all our Google.Apis NuGet packages are stable. There have been no real changes in the libraries since the release candidate (RC) version, but we have worked hard on improving the documentation on developers.google.com/api-client-library/dotnet/.

As usual, feel free to open new threads in StackOverflow with our google-api-dotnet-clienttag for any questions, suggestions or bugs. [GD: Post also leached in full] 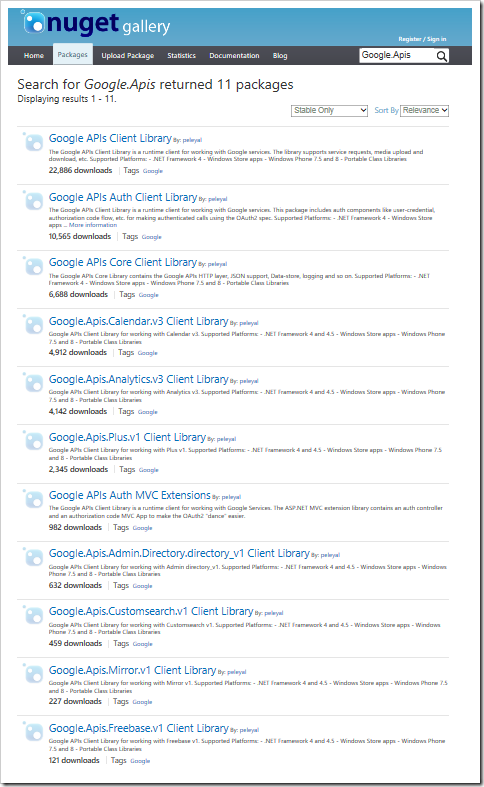 I've been using their .Net Library for the better part of a decade, but it wasn't as uber (i.e. as Google API wide) as this one.  Anyway... Good to seem them push this forward and give it some love (kind of/mostly, but better this then dead I guess!).