the following eight secular disruptive themes are what goldman sachs believe have the potential to reshape their categories and command greater investor attention in the coming years.

these eight themes – through product or business innovation – goldman claims are poised to transform addressable markets or open up entirely new ones, offering growth insulated from the broader macro environment and creating value for their stakeholders.

goldman focuses on the impact of creative destruction – a term made famous by the austrian economist joseph schumpeter, which emphasized the fact that innovation constantly drives breeding of new leaders and replacement of the old .

according to goldman sachs

in our view, the process of creative destruction is primarily driven by product or business model innovation – often abetted by technology - that results in a superior value offering for consumers, be it higher performance, greater convenience or lower cost. this enhanced value proposition is the source from which economic benefits then flow, first to the innovator and over time to its consumers and competitors. the new product or model often proliferates into a new paradigm until subsequent innovation in turn threatens its dominant position.

from the fall of polaroid, to the rise of wal-mart, to the age of the internet, which among other things ushered in an information revolution, changed the way we buy/consume, led to the proliferation of mobile devices and social networks, we are seeing a constant evolution of ideas that creates market leaders as others lose their leadership positions. indeed, the pace of change is becoming increasingly rapid such that relatively recent products can become redundant – for example, the slowing sales of pcs, point-and-shoot digital cameras and music players amid the continued cannibalization from tablets and smartphones.

solutions trying to keep up with data growth and complexity. new technologies are needed as companies seek ways to glean insights from the explosive growth of unstructured or “big data” (captured via the web, sensors, smartphones) to better understand customers, products and processes. traditional solutions have their limitations, as they were designed to analyze structured data for enterprise. we expect technologies (such as hadoop, nosql) to increasingly be leveraged with traditional solutions to address this phenomenon, augmenting existing vendors go-to-market offerings while also increasing risks of disruption. 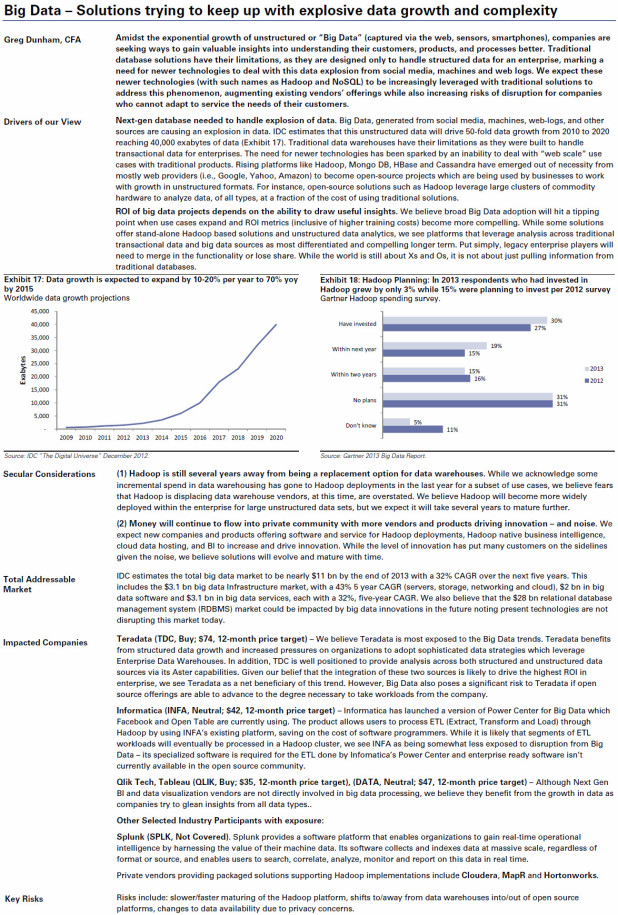 i believe that big data by itself is not the story. the convergence of big data and the cloud is going to disrupt a lot of traditional players.

here is an example of what is now possible on amazon web services (aws). the ability to execute a sophisticated analytics use case on the cloud is truly a disruptor for traditional vendors like ibm or teradata.  watch this evolve…. 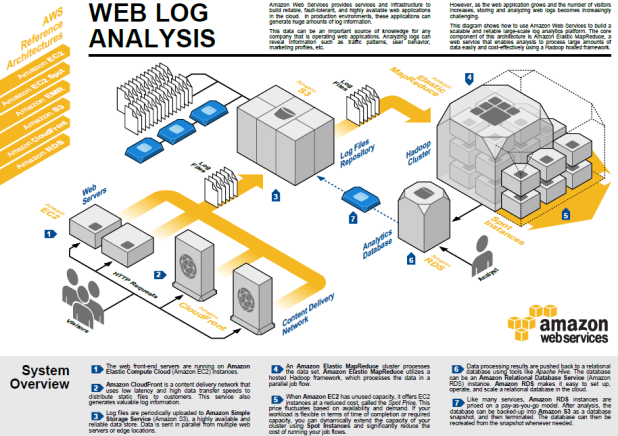