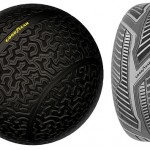 With all of the hubub about driverless technology there is a temptation to overlook some of the cool innovations that are already taking place in the interim.

I wrote last year, for instance, about a new project undertaken by Jaguar Land Rover that was aiming to automate the process of pothole detection. The system comes with a sensor that fits into the wheel mount of the vehicle and both spots potholes, prepares the vehicle for impact, and then shares the data with the local authority.

Such innovation is coming to the tire itself, with Goodyear recently revealing a couple of new designs that are built specifically with driverless technology in mind.

The first, called the Eagle 360, is a tire that has been designed to move in every direction.  The second tire, called IntelliGrip, is designed to be more akin to the technology mentioned above in that it communicates with the car and provides a steady stream of information on things such as the road conditions.

“It’s a concept tire with autonomous driving in mind, and we know that what matters most to drivers or passengers is autonomous vehicles is safety,” Goodyear say. “We believe that the tires are in a critical position, and would provide very important information that cannot be gathered by [a] different manner because they are in direct contact with the road.”

The tires are connected to the vehicle using magnetic levitation, with the spherical Eagle 360 designed to give the vehicle maximum manoeuvrability.

The Intelligrip has a more traditional design but is laden with smart sensors that are built into the tread so that they can sense the road conditions and feed this back to the vehicle, thus allowing it to respond to slippery roads (for instance).

It’s certainly a fascinating approach, and I urge you to check out the video below to see the tires in action.