there was lots of exciting material to be covered during the google i/o 2014 keynote from san francisco, and dzone was busy during the almost three hours presentation live-tweeting the whole presentation . there was a lot of exciting news about the next version of android, including android 5.0's new runtime and user experience . similarly exciting news came from the google cloud segment of the presentation, which revealed an incredible new big data pipeline service called google cloud dataflow .

but for me, the news i was waiting for centered about google finally showing off a bit more about android wear, and potentially releasing an opponent for apple's homekit in the home automation realm. the actual result was a bit surprising: instead, we got the full release of android wear sdks, including the live launch of two new samsung and lg smartwatches, the long-awaited health and exercise monitoring tool google fit, and a previously unheard of android auto.


android wear and some new hardware

we've known about android wear for a while now, and google has already shown off some rendering of what the software will look like on the gorgeous new moto 360 smartwatch. however, we've been waiting a while for the android wear sdk--but we knew it was coming, and it stole the show at i/o. sundar pichai announced at the sxsw event that the sdk would be showing up (most likely) at google i/o.

"in about two weeks, you will see us launch the first sdk for what we think of as android for wearables. when we think of wearables, we think of it as a platform. we see a world of sensors... sensors can be small and powerful, and gather a lot of information that can be useful for users. we want to build the right apis for this world of sensors."


demonstrated on stage were some of the neat tricks that android wear has in store for smartphone users, including a security feature that recognizes users based on paired smartwatches that bypass their phone pins. also, the "material design" focus of android l (5.0) has been carried through to android wear--the result is a pretty slick interface, simple user experience, and a set of full apis made available to developers.

also, the gadget-gifting of the conference happened this time with a choice of the two new smartwatches released mid-conference, the lg g watch and the samsung gear live. attendees now only could pick a watch at the keynote, but they also are all going to receive a moto 360--by far one of the most anticipated smartwatches out there--when it releases in a couple months. talk about developer perks.

still very important new additions came towards the middle-to-end of the keynote, including the previously teased google fit, an answer to apple's healthkit announcement which is now a few weeks old. the health monitoring suite works with android wear and mobile devices to collect healthcare and environmental data normally acquired through fitness bands and other wearables. considering it's a single set of apis, and it allows users to combine services with other apps, it's going to be a strong contender in the health data monitoring environment of google's new smartwatches. 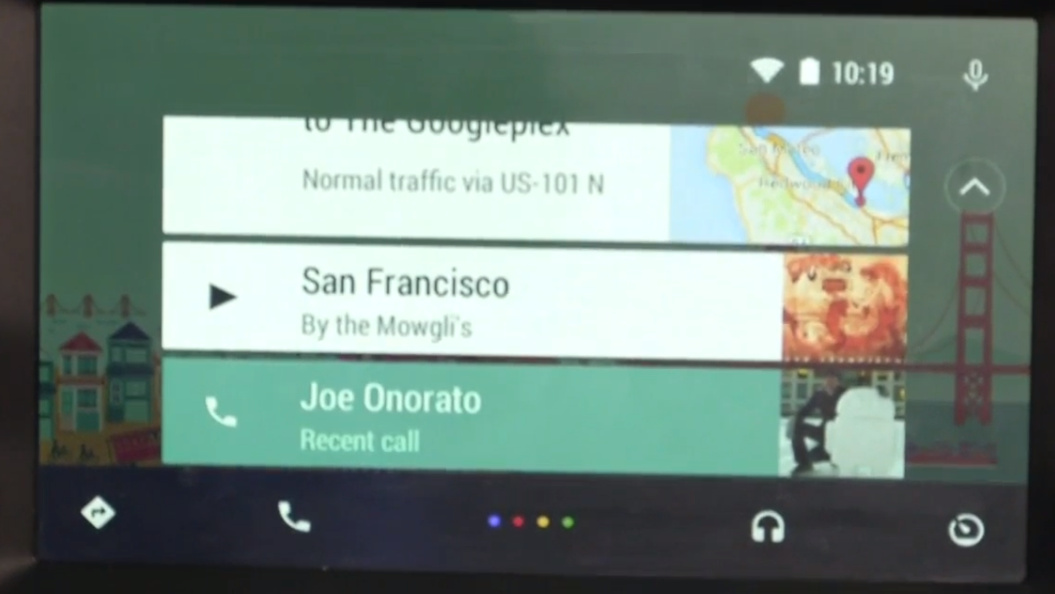 and not to be forgotten--on the contrary, it's actually a pretty big reveal. android auto was on the scene, and it's basically what you would expect--google now for your car's computer screen. and there's nothing wrong with that. actually, it's pretty sweet. it's a simplified version of android 5.0, and it's going to be available "soon" as an sdk. google announced over 40 new partners joining their open automobile alliance, which would give google even more traction in the automobile industry--something that could play favorably with google's existing interest in cars (as illustrated... well, everywhere).