Google was once thought to be hostile to designers because of the superficial qualities of some of their UIs. Users, supposedly, had a problem with this to the extent that Google embarked upon its next phase of domination: material design. It's coming to your desktop, phone, and tablet, whether you like it or not.

Don't let the name fool you. It's immaterial.

Material design, as everything that Google attempts, wants to have understood the design lessons of the past 10 years. It wants to be slick and smart, but still clear.

Unfortunately, this is a matter of more than just the visual.

Did the colors change? Sure. Did the icons slim down? Yeah. And did the unmanned zoo that is the array of Google interfaces change? It's being phased in, same as cancer.

This isn't to defend any of the old interfaces—so many of them are nigh unworkable. The Information Architecture in the AdWords interface—which you'd think, given that it's Google's main product, would be tight—is among the most tortured, illogical, and barrier-ridden of them all. The go-to for viewing AdWords (and Analytics, etc) data? Microsoft Excel. Or literally, anything else. Fill a hat with the names of apps that accept a comma separated values file for import. Pick a name out of the hat.

So, to get back to Google's Immaterial Design—it's understandable. All the start-ups, with infusions of venture capital and shiny pitch decks (made, mostly, by pure graphic designers of the kind that inhabit advertising and marketing), first popularized "flat" style. It was what the cool kids did.

And, Google has always so badly wanted to be cool and usually plays follow the leader to achieve that.

iOS anyone? How about Search, whose first algorithm the founders admit, they didn't devise. They did monetize it first, which continues to be an enduring legacy of how Google treats information products and concepts. ("Mine, mine, mine." If not, buy. Can't? Copy and litigate to the effect that the idea was either yours originally, or had no origin point.)

Unfortunately, just as Search wasn't the best approach to information retrieval, so Immaterial Design isn't the best approach to an interface. As Search catered to convenience and ultimately built harmful behaviors around that (SEO/SEM-antics), so too does Material Design cater to the superficial and hedonic qualities of an interface, rather than the deeper need for better information architecture. 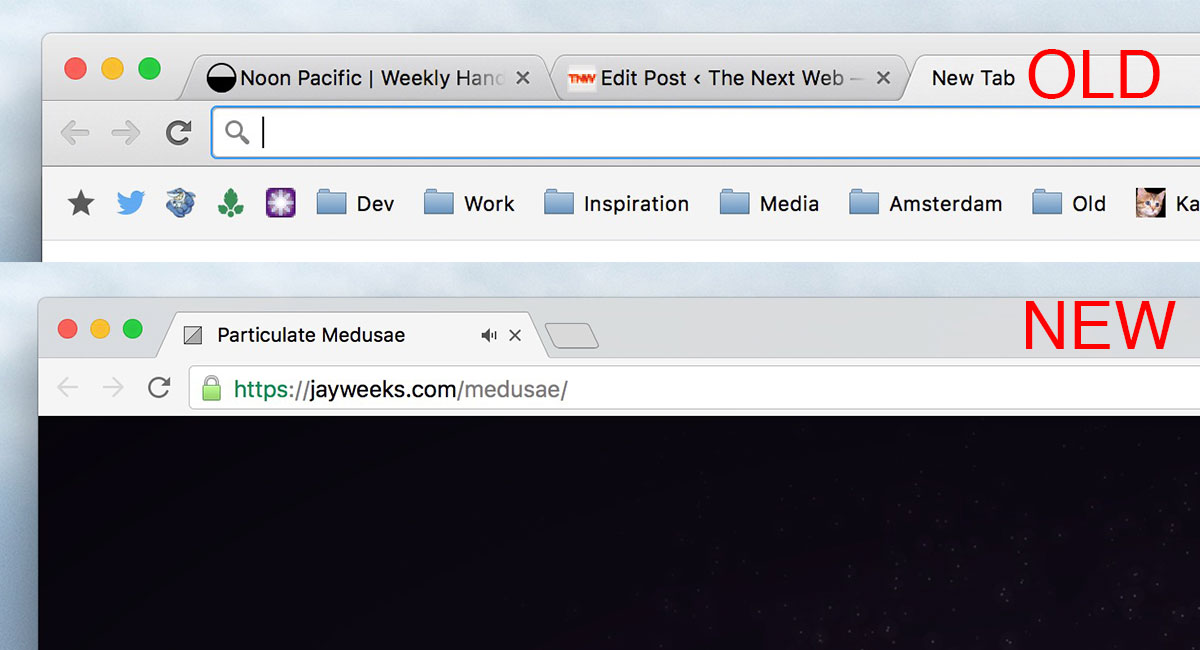 What is the improvement to user experience, information architecture, usability, or the core task of browsing? What justifies this as an engineering task? Why would users welcome this change?

If you reverse the two screenshots, is anything of consequence different? Could you differentiate them?

No. You'd be forced to conclude that the difference between the two is one of taste.

But, Google isn't letting you choose a "skin," nor is it improving the core product pictured above (Chrome, which hasn't made improvements to the activity of browsing in 10 years.)

Google is telling you this is what you like, based on some extremely dubious, but clearly fashionable, precepts. Things shouldn't have beveled edges or look like objects in the real world. Anything that has pixels must, by the High Dictates of the Design Discipline, embrace two-dimensional style and solid colors.

Welcome to "Lifestyle" Coding and Computer Science. It's not about what you know, it's about how you look.