While graph databases are certainly a rising tide in the world of technology, graph theory and graph algorithms are mature and well-understood fields of computer science.

In particular, graph search algorithms can be used to mine useful patterns and results from persisted graph data. As this is a practical introduction to graph databases, this blog post will discuss the basics of graph theory without diving too deeply into mathematics.

In this "Graph Databases for Beginners" blog series, we have covered why graphs are the future, why data relationships matter, the basics of data modeling, data modeling pitfalls to avoid, why a database query language matters, why we need NoSQL databases, ACID vs. BASE, a tour of aggregate stores, other graph data technologies, and native versus non-native graph processing and storage.

Today's discussion will be more theoretical, discussing different graph search algorithms and how they're used, including Dijkstra's algorithm and the A* algorithm.

There are two basic types of graph search algorithms: depth-first and breadth-first.

The former travels from a starting node to some end node before repeating the search down a different path from the same start node until the query is answered. Generally, depth-first is a good choice when trying to discover discrete pieces of information. They are also a good strategy for general graph traversals.

The most classic or basic level of depth-first is an uninformed search, where the algorithm searches a path until it reaches the end of the graph, then backtracks to the start node and tries a different path. On the contrary, dealing with semantically rich graph databases allows for informed searches, which conduct an early termination of a search if nodes with no compatible outgoing relationships are found. As a result, informed searches also have lower execution times.

Breadth-first algorithms conduct searches by exploring the graph one layer at a time. They begin with nodes one level deep away from the start node, followed by nodes at depth two, then depth three, and so on until the entire graph has been traversed. 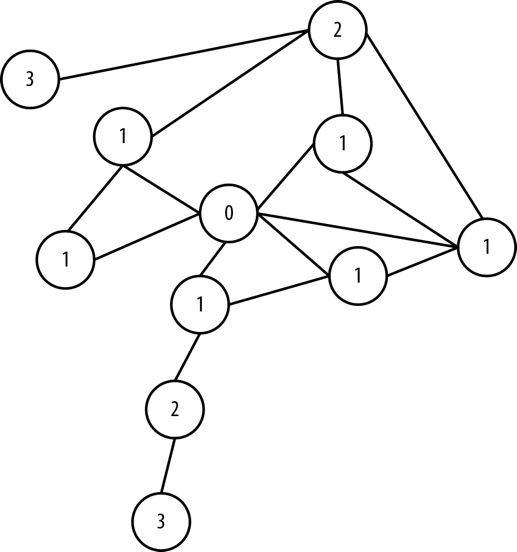 The goal of Dijkstra’s algorithm is to conduct a breadth-first search with a higher level of analysis in order to find the shortest path between two nodes in a graph. It does so in the following manner:Dijkstra's algorithm is very efficient, as it works only with a smaller subset of the possible paths through a graph. After each node is solved, the shortest path from the start node is known and all subsequent paths build upon that knowledge.

Dijkstra's algorithm is often used to find real-world shortest paths, such as for navigation and logistics. Let's see how it would find the shortest driving route between Sydney and Perth in Australia. 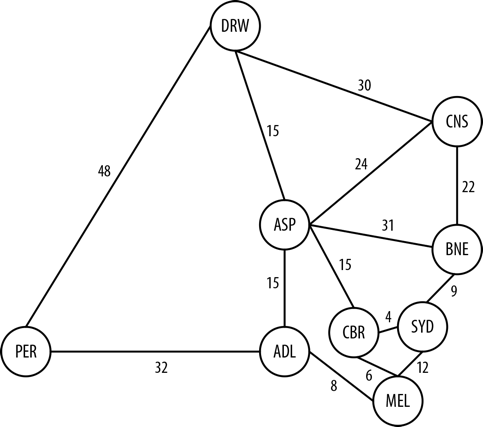 Sydney is the start node and is immediately solved with a value of 0, as we are already there. 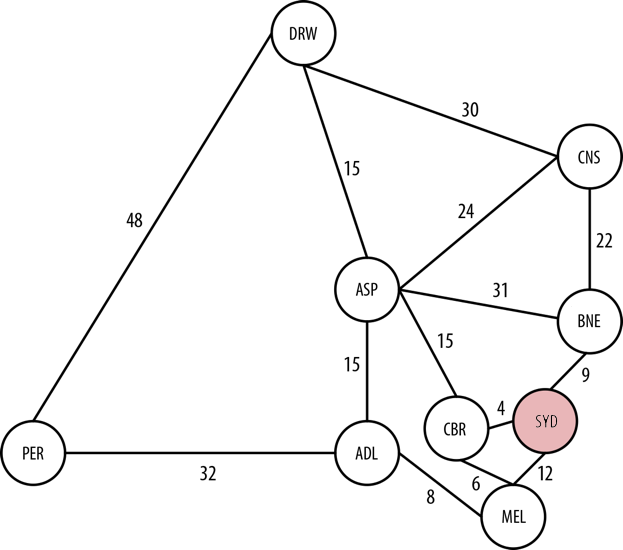 Moving in a breadth-first manner, we look at the next cities a level away from Sydney: Brisbane, Canberra, and Melbourne. 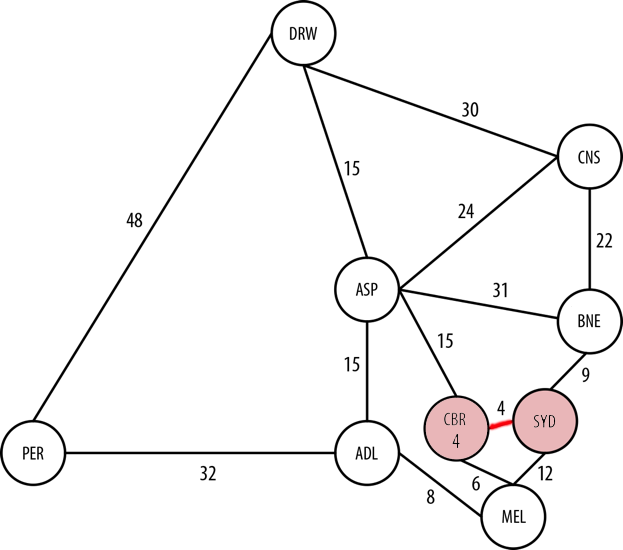 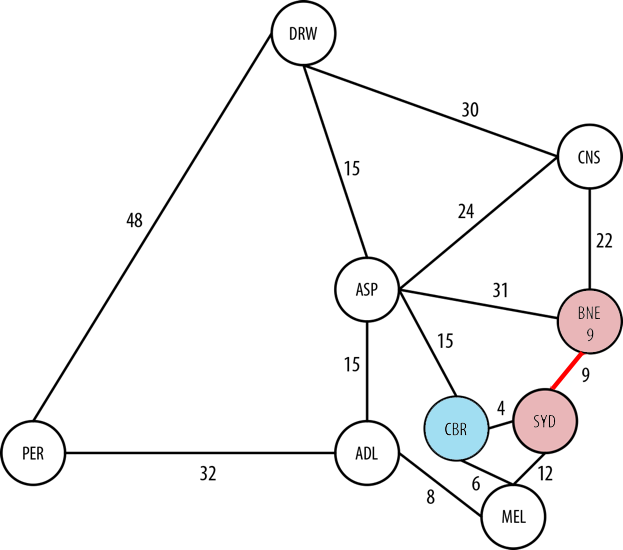 We move on, choosing between Melbourne, Cairns ,and Alice Springs. Melbourne is the shortest path at 10 hours from Sydney via Canberra, so it becomes the next solved node. 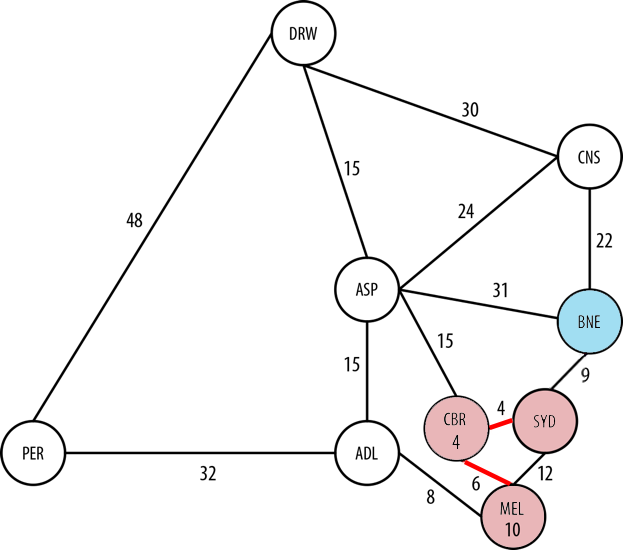 Our next options of neighboring nodes to solved ones are Adelaide, Cairns, and Alice Springs. At 18 hours from Sydney via Canberra and Melbourne, Adelaide is the next shortest path. 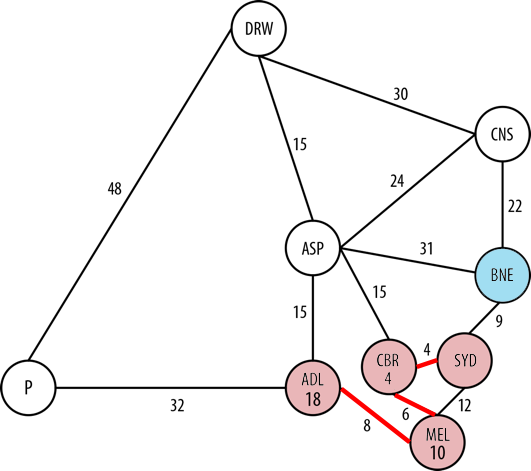 The next options are Perth (our final destination), Alice Springs, and Cairns. While, in reality, it would be most efficient to head directly to Perth, according to Dijkstra's algorithm, Alice Springs is chosen because it has the current shortest path (19 total hours vs. 50 total hours). Note that because this is a breadth-first search, Dijkstra's algorithm must first search all still-possible paths, not just the first solution that it happens across. This principle is why Perth isn't immediately ruled out as the shortest path. 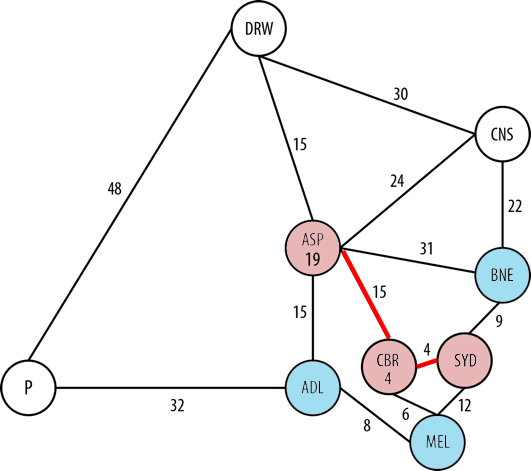 From Alice Springs, our two options are Darwin and Cairns. The latter is 31 hours to the former’s 34 hours, so Cairns is the next solved node. 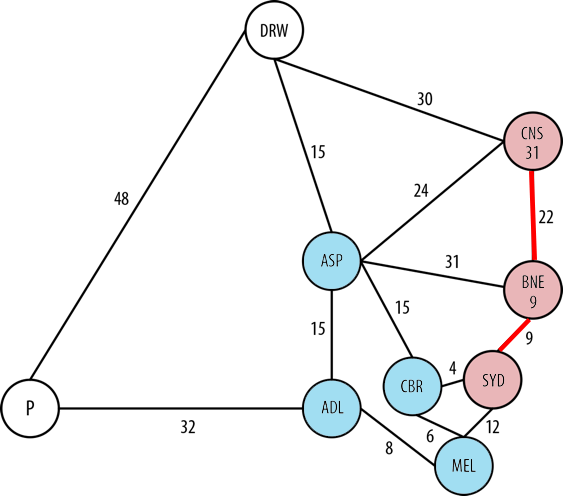 The only unsolved node left from Cairns is Darwin. 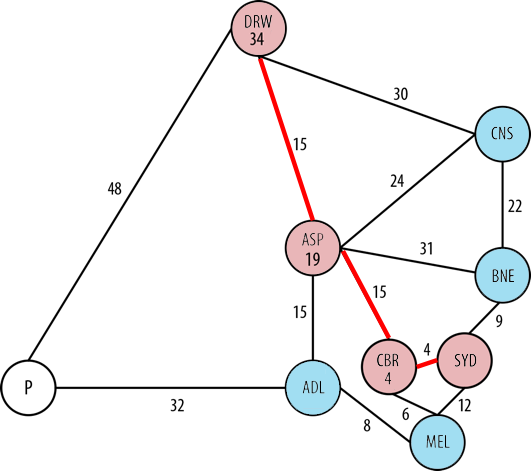 From Darwin, we make the final stretch and end up at Perth, with a cost of 82 hours for this given explored path. 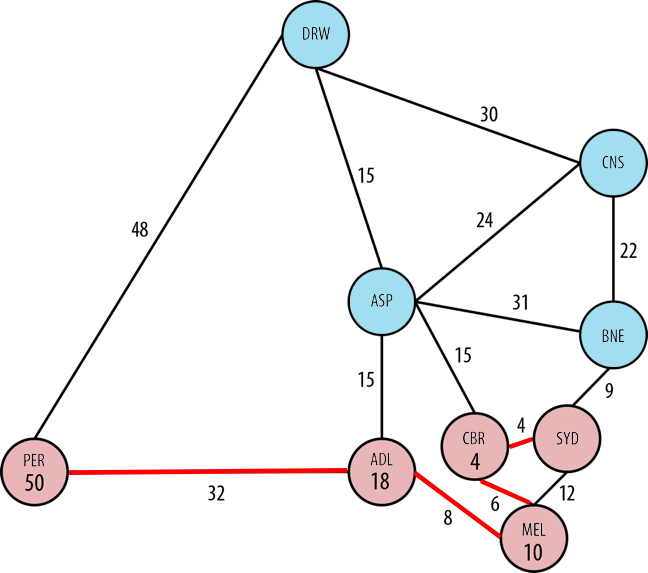 Now that Dijkstra's algorithm has solved for all possible paths, it can rightly compare the two routes to Perth:

Accordingly, Dijkstra' algorithm would choose the route via Adelaide and consider Perth from Sydney solved at a shortest path of 50 hours.

In the end, we can see that the algorithm uses an undirected exploration to find its results. Occasionally, this causes us to explore more of the graph than is intuitively necessary, as Dijkstra's algorithm looks at each node in relative isolation and may end up following paths that do not contribute to the overall shortest path.

The example above could have been improved if the search had been guided by some heuristic like in a best-first search. To apply that in our own example, we could have chosen to prefer heading west over east and south over north, which would have helped avoid the unnecessary side trips taken.

Consequently, the A* algorithm improves upon Dijkstra's algorithm by combining some of its elements with elements of a best-first search. Pronounced "A-star," the A* is based on the observation that some searches are informed, which helps us make better choices over which paths to take through the graph. Like Dijkstra's algorithm, A* can search a large area of a graph, but like a best-first search, A* uses a heuristic to guide its search.

Additionally, while Dijkstra's algorithm prefers to search nodes close to the current starting point, a best-first search prefers nodes closer to the destination. A* balances the two approaches to ensure that at each level, it chooses the node with the lowest overall cost of the traversal. As demonstrated by the example in the previous section, it is possible for Dijkstra's algorithm to overlook a better route while trying to complete its search.

For more information on how the A* algorithm is used in practice, consult Chapter 7 of Graph Databases from O'Reilly media.

As has been illustrated above, graph search algorithms are helpful in traversing a set of graph data and providing relevant information. However, they also have their limitations. We have seen that there are many varieties of search algorithms, ranging from the more basic breadth-first and depth-first to uninformed and informed searches to the Dijkstra’s and A* algorithms. Each has its own strengths and weaknesses, and no one type is better than another.
Topics:
algorithms, data, shortest path, dijkstra, node, search, graph databases