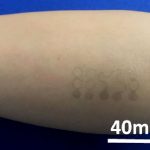 Since graphene was introduced to the world with a considerable fanfare, it has felt a bit like a technology looking for a solution. Despite not quite changing the world to the extent first envisaged, it is still making some interesting progress.

A good example is a graphene-based ‘tattoo’ developed by researchers at the University of Texas at Austin. It is capable of providing comparable measurements, both in terms of breadth and quality, as much bulkier medical equipment. The range of possible measurements include skin temperature and hydration, as well as electrical signals from the heart, brain and the muscles.

Suffice to say, the products are some way off being offered commercially, and while they are being compared with more traditionally medical equipment, their main rival is perhaps more the various mobile and wearable apps that also provide measuring capabilities.

Nonetheless, it is pleasing to see some progress being made in the application of graphene. It may be particularly useful in healthcare as it is capable of adapting perfectly to the contours of the skin.

The product began by growing a single layer of graphene on a sheet of copper. It is then coated with a support polymer, with the copper subsequently etched off. It’s then placed onto a tattoo paper, whereby the graphene is carved in order to make electrodes and connections between them. It’s then ready to be placed on the skin.

The initial test was used to measure five distinct things, which were then compared with data recorded from more conventional sensors. Interestingly, in some circumstances, the graphene tattoo outperformed the traditional sensor. For instance, when placed on the chest, the graphene sensor was able to pick up minute fluctuations that the EKG device did not.

The researchers believe this might be because the nature of graphene means that the sensors can conform perfectly to the skin, whereas more traditional sensors often have air gaps between the skin and the sensor, which degrades the signal quality. Even more malleable sensors can have problems as the relative thickness of them can cause wrinkles that mean they lose contact with the skin, which as the graphene tattoo is 0.3-nm thick, is not a problem they suffer with.

The next stage in the development of the product is to include mechanisms so that the signals can easily be transmitted to a digital device, such as a smartphone or computer. Presumably, the team will also work on ensuring the products can be developed for a commercially viable price.

As a proof of concept, however, it is certainly interesting and worth keeping an eye on.

The Sensor Technology That Can Assess Reproductive Health

Wearable Technology Is the Future of Healthcare