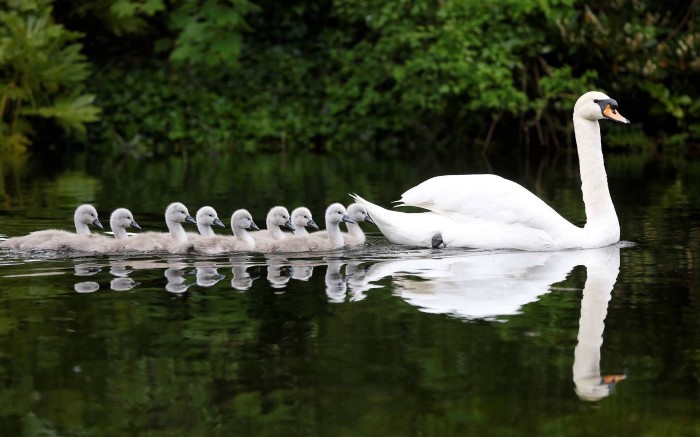 Resembling a graceful rendition of Tchaikovsky’s infamous ballet, the namesake Swan Lake release of the Ballerina (referred to as Ballerinalang in the article) programming language comes packed with a revamped gRPC library to provide a more elegant way of handling client and bi-directional streaming cases. This article aims to discuss this improved gRPC streaming functionality by referring to an example for better understanding. However, if you are new to gRPC in Ballerinalang and seeking in-detail knowledge on the basics and implementation of a Unary application, read this blog on Ballerina + gRPC.

Let’s look at a basic microservices-based bill calculator as an example. The client would stream the price and quantity (the input values) of various items to be included in the total bill, and the server would essentially multiply and add them together to return the total bill as a reply.

In this example, the messages streamed by the client are named as InputValues containing the name of the item, price, and quantity. The server responds with a message named Bill containing the type of the bill (final or interim bill), the total quantity of items ordered, and the total price.

This application would have two modes of operation or remote procedure calls, which can be described as follows:

When it comes to client and bi-directional streaming cases, firstly the generated gRPC stub must be used by the client to open a connection with the gRPC server and register a message listener as shown in the diagram below.

Using the Streaming Client object, the client can start streaming messages to the server. The messages sent by the server are captured by the message listener specified in the initialization stage. For each of the two remote procedure calls in this example, the flow of the message is illustrated in the following diagram. 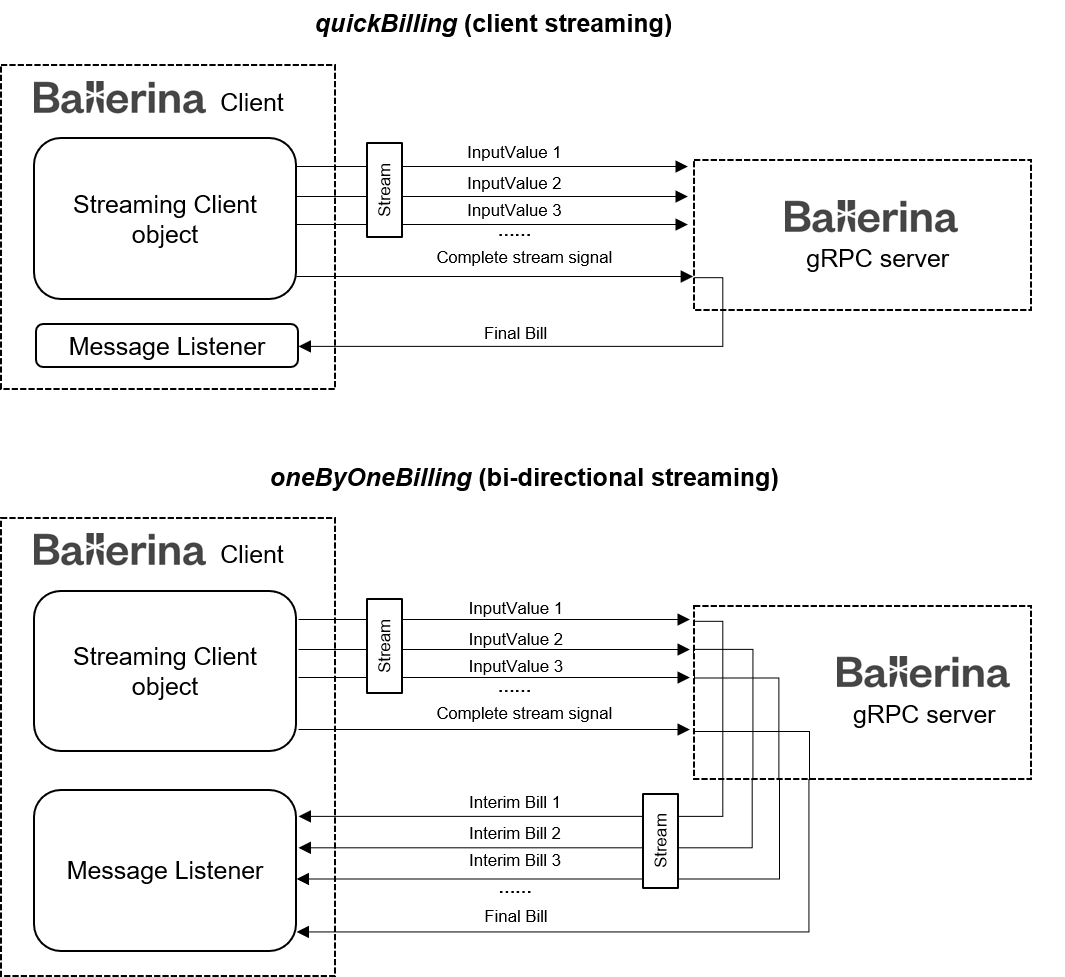 This tutorial is based on Ballerina Swan Lake Preview 1 release and upwards, which can be downloaded here. The server implementation would not work on earlier Ballerinalang releases.

We start this tutorial by creating a Ballerinalang project and adding the necessary modules using the Ballerinalang CLI commands. In this example, two modules were created for the server and the client.

Next, the protocol buffer definition of the above-described example’s remote procedure calls is defined under a single service (which is supported in the Ballerinalang gRPC server since the Swan Lake Preview 1 release).

The server boilerplate code can also be generated using the following command. This generated file can be copied into the server module directory.

Lastly, we can generate the client boilerplate code by using the following command. This file must be copied to the client module directory.

Now that the preparations are done, we can start to implement the server. The server boilerplate code can be edited over with the resource functions included in this section.

The resource function for quickBilling (client streaming) can be defined as follows.

The client’s streamed messages are made available as a stream object argument, which can be iterated through using a loop processing each message sent by the client. Once the client stream has completed, a grpc:EOS error is returned, which can be used to identify when to send the final response message (the final bill) to the client using the caller object.

The resource function oneByOneBilling (bi-directional streaming) can be defined as follows.

The code above is similar to the quickBilling resource function code. The only difference here is that, as this is a bi-directional streaming resource, for each message that is processed, the interim bill value is sent back to the client using the caller object.

To test the above gRPC streaming server, I have included an example of client implementation in this article. The following can be added to the client code generated using the Ballerinalang gRPC tool.

When running the above client an argument is required, which indicates whether to use quickBilling or onByOneBilling. Based on this, the correct call is initialized, returning a streaming client object. Using this object, three messages are streamed to the server, and finally, the complete signal is sent to the server. The BillingServerMessageListener, which was registered during the initialization phase, captures the messages and the complete signal sent by the server.

Trying Out the Example

Finally, it’s time to lay back, relax, try out the code we just implemented and see the magic in action. We’ll start by running the server using the following command.

Once the server is up and running, we can test out the client streaming and bi-directional streaming remote procedure calls separately. When running the client, include the “quick” flag for the former and the “oneByOne” flag for the latter. The command for running them and the expected results are illustrated below.

Congratulations if you were able to make it up to this point. Getting a gRPC streaming service up and running in Ballerinalang is exceedingly simple and you have mastered everything you need to get there.

If you want to take a look at the entire implementation of the example above, you can find it in this GitHub repository.

With gRPC being increasingly adopted in microservices-based applications, Ballerinalang provides a graceful language embedded approach to implement it. This is taken a step further in the Ballerinalang Swan Lake Preview 1 release with a server-side re-haul of gRPC streaming, providing a cleaner way to handle client streams and multiple resource support within a single service.

There is no better way than trying the above example out yourself to see how easy and quick it is to implement and get a gRPC streaming service up and running using Ballerinalang.

Here are some resources to get you started with Ballerinalang: