This is part 5 of a series that explores building a control plane for Envoy Proxy. Follow along @christianposta and @soloio_inc for more!.

In the previous entry, we explored why a pluggable control plane is crucial for keeping up with the fast-moving Envoy API as well as integrating with different workflows an organization may wish to adopt. In this post, we'll look at the tradeoffs in deploying the various control plane components.

In the Istio service-mesh project, the control plane components are deployed and run separately from the data plane. This is very common in a service-mesh implementation. That is, the data plane runs with the applications and handles all of the application traffic and communicates with the control plane via xDS APIs over gRPC streaming. The control-plane components generally run in their own namespace and are ideally locked down from unexpected usage.

The Gloo project, as an API Gateway, follows a similar deployment model. The control-plane components are decoupled from the data plane and the Envoy data plane uses xDS gRPC streaming to collect configuration about listeners, routes, endpoints, and clusters, etc. You could deploy the components co-located with the dataplane proxies with Gloo, but that's discouraged. We'll take a look at some of the tradeoffs in a bit.

Lastly, we take a look at co-deploying control plane components with the data plane. In the Contour project, by default, control plane components are deployed with the data plane though there is an option to split up the deployment. Contour actually leverages CRDs or Ingress resources for its configuration, so all of the config-file handling and watching happens in Kubernetes. The xDS service, however, is co-deployed with the dataplane (again, that's by default - you can split them). 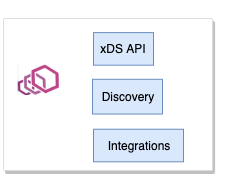 When eBay built their control plane for their deployment of Envoy, they also co-deployed parts of their control plane (the discovery pieces) with their data plane. They basically wrote a controller to watch CRDs, Ingress, and Service resources and then generate config maps. These config maps would then be consumed by the discovery container running with the Pod and hot restarted with changed, which updated Envoy.

In the Ebay case, we see a "hybrid" approach and was highly influenced by the specifics of the rest of their architecture. When evaluating a control plane for Envoy, or considering building one yourself, how should you deploy the control-plane components?

Should I Keep Control Planes Separated From the Data Plane?

There are pros and cons to the various approaches. The Gloo team believes keeping the control plane separate is the right choice for most use cases and you should avoid fully co-deploying your control plane with your data plane.

For these reasons, we recommend to keep the control plane at arms length and decoupled from the data plane.

Building a control plane for Envoy is not easy and once you get to understand what's needed from a control plane for your workflow, you'll need to understand how best to deploy it. The Gloo team recommends building a pluggable control plane and keeping it separate from the data plane for the reasons outlined above. Gloo's architecture is built like this and enables the Gloo team to quickly add any new features and scale to support any platforms, configurations, filters, and more as they come up. Again, follow along @christianposta and @soloio_inc for more Envoy, API Gateway, and service mesh goodness.

Guidance for Building a Control Plane for Envoy, Part 1

Guidance for Building a Control Plane for Envoy, Part 4: Build for Extensibility