I have been writing about Sencha Touch and Cordova for some time now. In a sense, it is the documentation of my learning of these two platforms in the last couple of months which might help somebody out there who is struggling with the same issues that I once had. I have never used Sencha Architect for my development environment. I am using Visual Studio as Text Editor as well as Packager for Cordova Applications with TACO extension.

For any orientation aware application, there are two things that the developer should take care of:

1. Device orientation at the start of the application.

Here are the steps that we are going to follow while building orientation aware application:

To start with I have created a sample Cordova application in Visual Studio 2015 named OrientationTutorial. I have added Sencha-Touch-Debug.js and Sencha-Touch.css files to my application’s root folder and loaded them in index.html. Pretty normal stuff, isn’t it? The tricky part is, unlike Sencha Architect Visual Studio doesn’t have desired visual builder for Sencha Touch that can let you build your views, controllers, models, stores, and profiles in different folders and build a nice app.js for you in the end. So we have to do it ourselves. 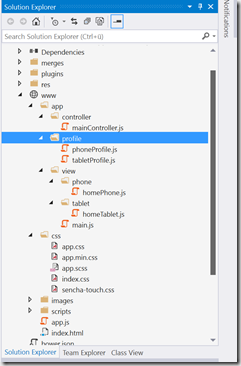 Go to config.xml, open plugin tab and add orientation plugin to your application. It should look something like this:

I have created the main view at the launch of the respective profile. That means the Main view is add when the phone/tablet profile is launched.

All the default views such as homePhone and homeTablet are by default landscape views. We will create portrait view differently. For that, add the folder to the view folder called ‘portrait’. Inside this, create homePortrait view.

Now, some important things. In our design architecture, we are going to create views based on their alias’. Sencha Touch creates alias’ based on xtypes in the background. Which means we cannot use same xtype for views which are essentially same but are designed differently for different profiles and orientation. For example, the home view has 5 buttons, which all work the same. But based on whether the view is rendered on tablet or phone and whether the orientation is portrait or landscape, the position of these buttons change. So for the different rendering, we have different views. But we might need the same xtype in the controller for these views, to tie these to some model or load data from store. To overcome this problem, we use two approaches. We tie different profile views to the same widget by inserting profile name between them explicitly at the initialization of the profile. This way the views can share the same xtype but are rendered based on their profile names. This works for profiles because on one device only one profile is activated. The code looks something like this:

However, what about orientation? Orientation can change multiple times while using the application. And so we cannot even explicitly tie the orientation view to the alias. To fix this, we simply create the view by adding widget.portrait.* to the item ID of the view whenever the portrait view is to be created, and for landscape view we just use normal alias. Also, inside controller we avoid using alias in configuration refs. That is because when you use alias in config refs and you have to use the views inside controllers, you have to invoke them twice with two different alias. This increases duplicate code.

Instead one can either use IDs or Ref. IDs are advised against by Sencha Developer Team and rightfully so. IDs add a lot of confusion as well as if you don’t destroy the views with same ids, you are in a deep trouble with multiple hours of debugging one line of code. Ref however, in my opinion, is the best approach to tackle this issue. The configuration inside controller should look something similar to:

Notice the refs in the Config.

And here is how the landscape view of the home looks - 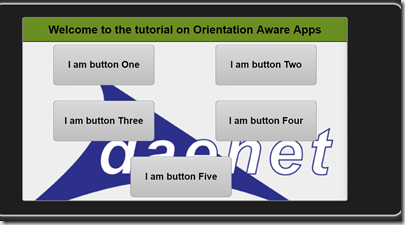 I have created five sample buttons and arranged them in a bit vbox container and then smaller hbox containers. The arrangement has been handled in the sencha view while positioning and sizes are configured in css. 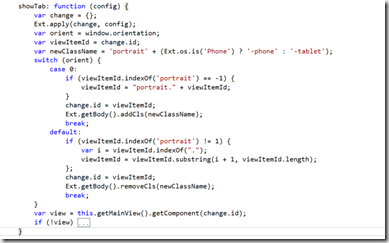 Now without creating portrait view of home, if we just apply orientation change event, this happens: 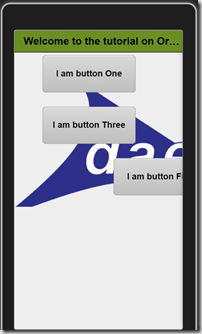 As you can see, the view is totally distorted, buttons cannot be seen, and Title bar cannot hold complete text. Some of this can be handled by CSS (Which I will cover in the next part of this tutorial), however, in order to give a seamless experience to the end user, one needs to design a different view altogether.

So I created a portrait version of the home view. Notice that it has same ID and same ref but NOT same xtype. This is very important. You cannot have two views with same xtype. It creates a hell of confusion inside framework, and more often than not, framework gives you wrong view for wrong orientation. 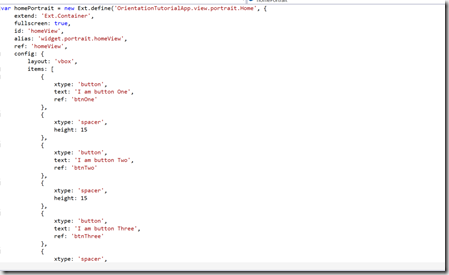 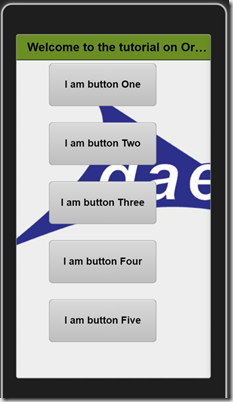 As you can see the view is still not perfect. Background is not exactly in the center, nor is it visible, as well as buttons need better alignment and title bar can do with smaller font to accommodate complete text. However, we will take care of that with CSS.

Now the only thing that remains is handling the orientation change event. For that, we add orientationchange event to viewport, and handle it in onOrientationChange function. Well, there is actually nothing much to handle, just get the active items id which in this case is homeView. Destroy the landscape component, and add the portrait with the help of showTab function which I have already described above.

That’s all. The basic orientation awareness is implemented. In the next part, I would talk about creating different classes for different orientation, and handling multiple views.

PhoneGap/Cordova Compatibility For Codename One