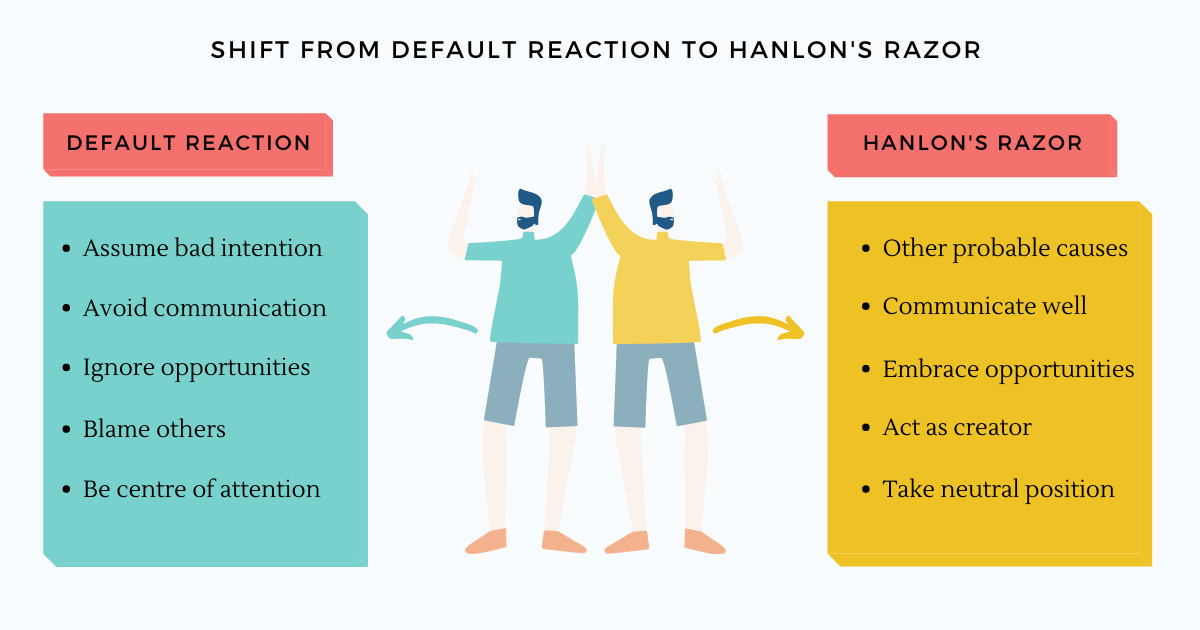 What do we do when things do not turn out as intended? Instead of being curious and trying to learn from the situation, our mind assumes the worst possibility. Depending on how we see the event unfold, we derive an interpretation and create stories in our minds that conform to our beliefs.

As a species, we are also very unique in associating two completely disconnected stories and finding patterns in events that do not exist. Our tendency to interpret every event as it relates to us creates a distorted version of reality. It makes us assume negative intent when things do not work out even though the outcome may be completely unrelated to us.

The ability to look beyond our personal narrative, imagine the situation from another person's perspective, and remove ourselves from taking on a central position in every act to adopt a more neutral tone requires utilizing Hanon's Razor as a mental model while evaluating such circumstances.

"Never attribute to malice that which is adequately explained by stupidity"

Over time, I have developed my own version of Hanon's Razor that I find more relevant to my work and life -

"Never attribute to bad intentions that which is adequately explained by ignorance, incompetence, negligence, misunderstanding, laziness or other probable causes"

Applying Hanon's Razor as a mental model can enable us to communicate well and build better relationships by showing an intent to understand another person and their actions as opposed to living with our assumptions.

The underlying assumption that the other person is acting out of bad intention can shut down all possible communication. The negativity trap can prevent us from reaching out to the other person. It can make us distance ourselves from others, avoid communication, collaboration, and ignore opportunities that might benefit us.

Human beings are uniquely designed to carry the emotional burden of a negative experience in their minds much longer than a positive outcome. This mindset can also lead to overthinking which is detrimental to our health and overall well being.

Without applying Hanon's Razor from our toolkit at the right moments, we may end up wasting our time and energy by focusing on the wrong things.

Hanon's Razor enables the mindset shift from acting as the persecutor in the drama triangle by blaming others for the wrongdoing to taking a moment, stepping back and thinking about other possibilities. 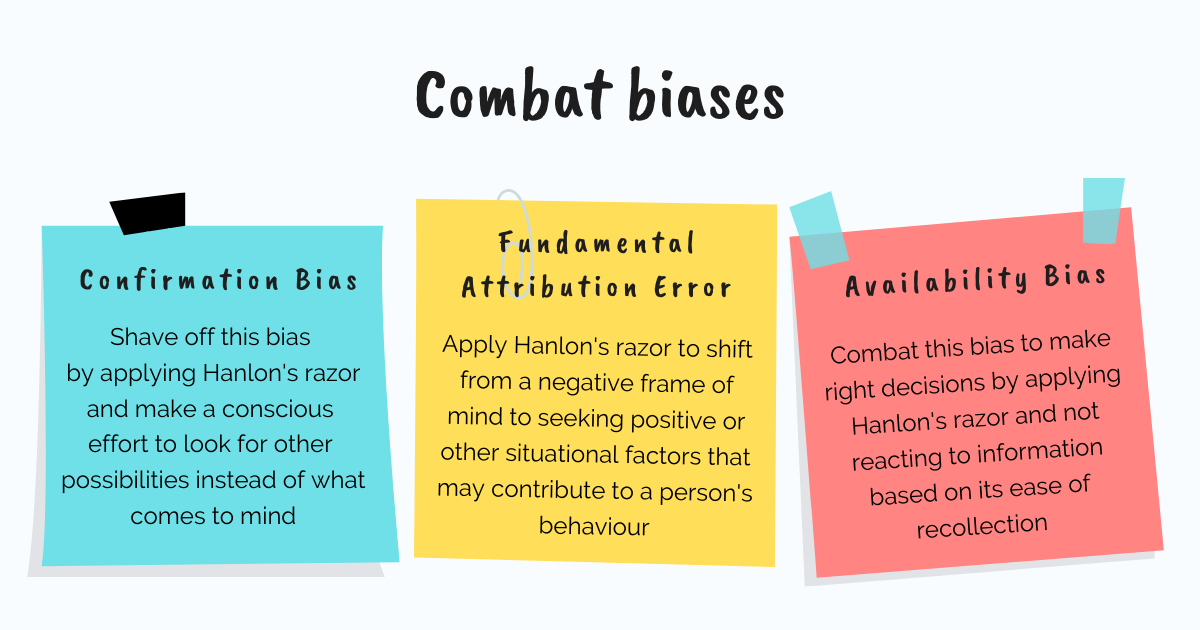 By living with subjective reality based on how we see things from our perspective, we may provide illogical arguments, make inaccurate judgements, and take irrational decisions.

Hanon's Razor is a powerful tool for overcoming some of these biases.

Fundamental attribution error is the tendency to overemphasise personality and underestimate situational factors when explaining other people's behaviour. Also described as "what people do reflects who they are".

Because we judge others by their actions, this bias can manifest itself when other's actions do not fall in the path of our expectations, they are not in line with the desired results or do not follow our sense of right or wrong.

The natural tendency in such circumstances is to attribute their actions to their personality without taking into account other factors that may contribute to their behaviour.

You may be quick to judge your co-worker who doesn't attend your party as being envious of your promotion without realising that they got held up with a personal emergency. You may think of your boss who does not invite you to an important meeting as insensitive and cold without knowing that the meeting demanded a restrictive audience for other reasons.

Employing Hanon's Razor during such moments can help us shift from a negative frame of mind to seeking positive or other probable causes that may contribute to this behaviour.

Confirmation bias is the most profound bias in all human beings in which we seek evidence that confirms our beliefs and refute all data and arguments that contradicts it.

The desire to be right crushes the intent to find the objective truth. When confronted with information that challenges our personal narrative, we work hard to find ways to reject the evidence that contradicts our beliefs and look for information that strengthens our point of view.

If you think your boss is biased, you will look for evidence that will rationalise your point of view and discard any data that's not compatible with the beliefs you hold.

Hanon's Razor is a great principle that can be used to shave off this bias by making a conscious effort to look for other possibilities and expand your thinking.

Availability bias is a heuristic in which we apply mental shortcuts to relate an event to our past experiences based on the information we can recall. We form opinions, evaluate options, and even base our decisions based on what comes to our minds from our latest experiences.

Naturally, this bias makes us rely on information that's readily available to us and seem to ignore other facts or data points that are either hard to remember or difficult to recall.

During a performance review cycle, people tend to base their feedback on their most recent interactions by recollecting the data points that come readily to their minds. This feedback is biased towards the latest occurrences as opposed to something someone did a while back.

Latest missed delivery deadline will carry far more weight than all the other successful deliveries done on time.

Combating this bias at work is crucial to making the right decisions by not reacting to information based on its ease of recollection.

By applying Hanon's Razor, a negative mindset that can arise from availability bias can be probed further to adopt a better thinking practice. 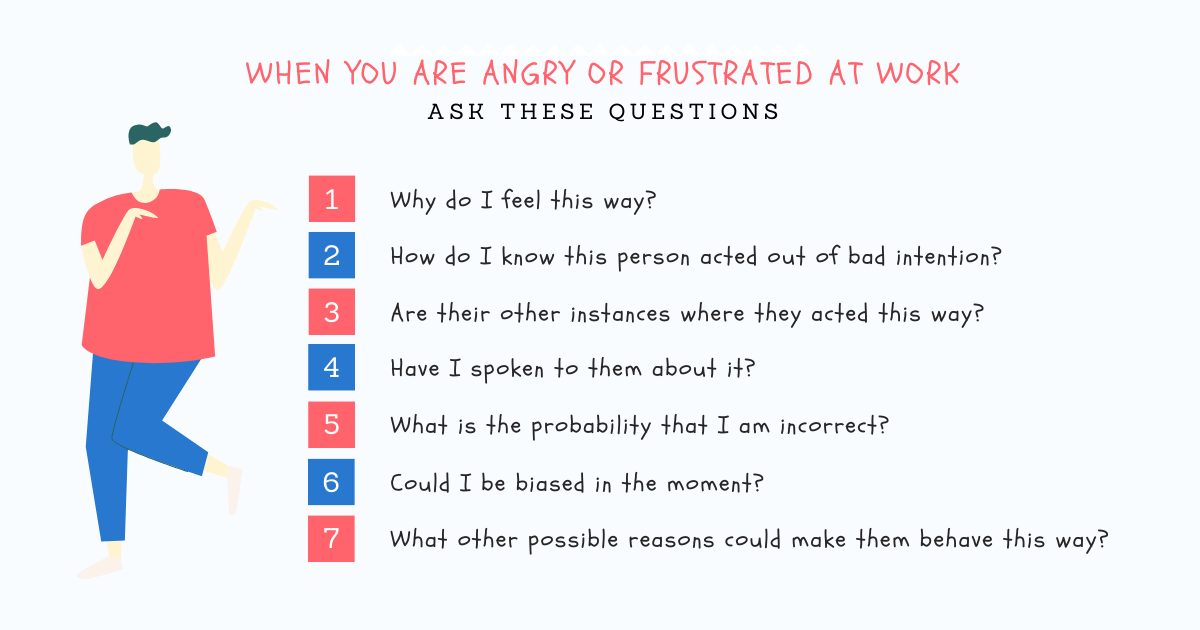 Applying mental models at work can be extremely useful since they enable us to expand our circle of competence and make better decisions.

There are multiple situations at work that can lead to anger and frustration. If not handled well, they can be a source of stress, anxiety, and other related health issues. This is where mental models like Hanon's Razor comes to our rescue.

By applying Hanon's Razor at work, we can catch ourselves in those moments of anger and frustration and question if our feelings are justified. When you doubt someone of the wrongdoing, ask these powerful questions:

From Douglas W Hubbard in Failure of Risk Management -

"A bit of wisdom called Hanon's Razor advises us 'Never attribute to malice that which can be adequately explained by stupidity.' I would add a clumsier but more accurate corollary to this: 'Never attribute to malice or stupidity that which can be explained by moderately rational individuals following incentives in a complex system of interactions.' People behaving with no central coordination and acting in their own best interest can still create results that appear to some to be clear proof of conspiracy or a plague of ignorance."

When you are denied promotion, another colleague disagrees with your suggestion, a team member refuses to help, other team does not complete their work on time impacting your delivery timelines or project scope changes, you can go for the easy route, blame others and label them as difficult people.

But what if you applied Hanon's Razor and asked these questions? You may save yourself from the mental agony and rather approach the problem with the curiosity to understand and a desire to make things better. 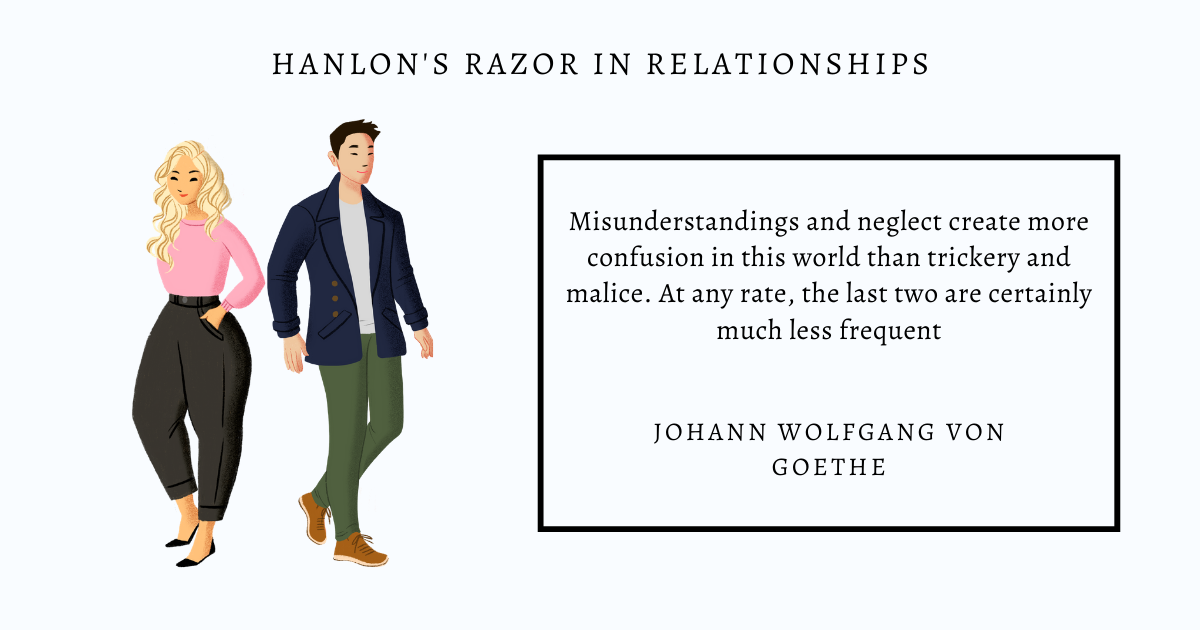 When your friend ignores your calls and does not call back, your spouse steps in late for your birthday party or your children refuse to cooperate, you may feel being wronged by your own people.

It may be tempting to assume that they do not have your best interests at heart as their actions suggest (fundamental attribution error), the data around you validates your hypothesis (confirmation bias) and this may not be the first time they behaved this way (availability bias).

In these moments, applying Hanon's Razor can enable you to shift from assuming bad intention to exploring other alternative viewpoints. It may strengthen your relationship as you approach the other person with the desire to understand instead of blame.

"Misunderstandings and neglect create more confusion in this world than trickery and malice. At any rate, the last two are certainly much less frequent"

Opening your mind to seek other views shifts your perspective from a negative frame of mind to a positive one, from shutting down communication to actively engage and blaming others to finding solutions together.

How to Decide When to Apply Hanon's Razor

Hanon's Razor is similar to another mental model Occam's razor which states "The simplest solution to a problem is usually the correct one". Both are heuristics to shave off hypotheses and favour simplicity.

These razors are not always applicable and it's important to understand their limitations before adopting them and making them a part of your thinking practice.

Hanon's Razor while useful is not applicable when the person does have malicious intent. Though rare, some people do act with the desire to cause harm to others.

In the beginning, it's indeed very difficult to separate something that seems bad but is purely situational from the one that's acted upon with an intent to hurt, destroy, or cause damage.

Being watchful requires carefully evaluating the situation by asking these questions:

Hanon's Razor is a very powerful mental model that can be applied in every situation where our first instinct is negative. Assuming bad intentions can prevent us from building better relationships, sharing our perspective and realising opportunities while considering ignorance, incompetence, negligence, misunderstanding, laziness or other probable causes can enable us to learn, succeed and grow.

What do you think about adopting Hanon's Razor as a thinking practice?