With this new 3 parts series, we aim to:

The first part of this new series will be dedicated to a reminder of the key concepts of Kubernetes, necessary to understand the threat model defined by the government agencies.

K8s is about seven years old, and over the last three years, it has risen in popularity to consistently be one of the most loved "orchestration platforms".

To be fair, there isn't anything really new in Kubernetes. When one instance of the application cannot handle the workload, we add another instance, then we load-balance it. We already knew how to do that ten years ago. Back in 2010, I was working in the architecture team in the largest search engine companies in China, and we were already capable of scheduling nodes and apps with redundancy, high availability, and automated failover. Except back then, we were a whole team building wheels so that other vertical product teams didn't have to do this, but some people had to worry about it.

Not anymore. With Kubernetes scheduling and autoscaling, the engineers do not need to worry anymore about load balancers and failover; they don't need to investigate into which is the best tool for the job and build the wheels. Instead, they are liberated from the mundane daily maintenance routine so that they can focus on the more important stuff. That's why K8s is prevailing: it automates the stuff you would otherwise have to worry about.

Now it's not uncommon that the latest generations of software engineers and system engineers have never touched or even seen a physical server on the rack. Because why would they need that? Everything is cloud-based and managed by code!

Why Should You Care About This Guide?

However, as a (complex) platform, Kubernetes is not so straightforward to set up correctly and run fluently without any issues. It has many components, and it's fair to say that every component is quite critical. There is a learning curve, and the curve isn't flat. That's why there are so many data leaks or hacked clusters due to misconfiguration.

Since K8s has become the de-facto place to run your workload, and it integrates well with whatever cloud provider you are using, the importance of cluster security is becoming more and more paramount. That's why NSA/CISA decided to kick in and say something about it.

You might have already heard of National Security Agency from movies. It saves lives, protects privacy rights, and advances U.S. goals and alliances, often by clandestine operations. What you might not know is, it’s leading the protection of U.S. communications networks and information systems.

The Cybersecurity and Infrastructure Security Agency, on the other hand, was established much more recently (2018) to focus on the government's cybersecurity protections against private and nation-state hackers. It's deep into topics like cybersecurity, infrastructure security, emergency communications, and so on.

Both share the mission to keep the US safe from cyber threats, and doing so assumes the sharing of military-grade recommendations to harden private infrastructures on the nation scale.

Now, without further ado, let's dive right into it.

First, let's do a quick recap of the components in Kubernetes:

A K8s cluster consists of some worker nodes (which run containerized apps) and a control plane that manages the worker nodes and the Pods in the cluster.

On each worker node runs: 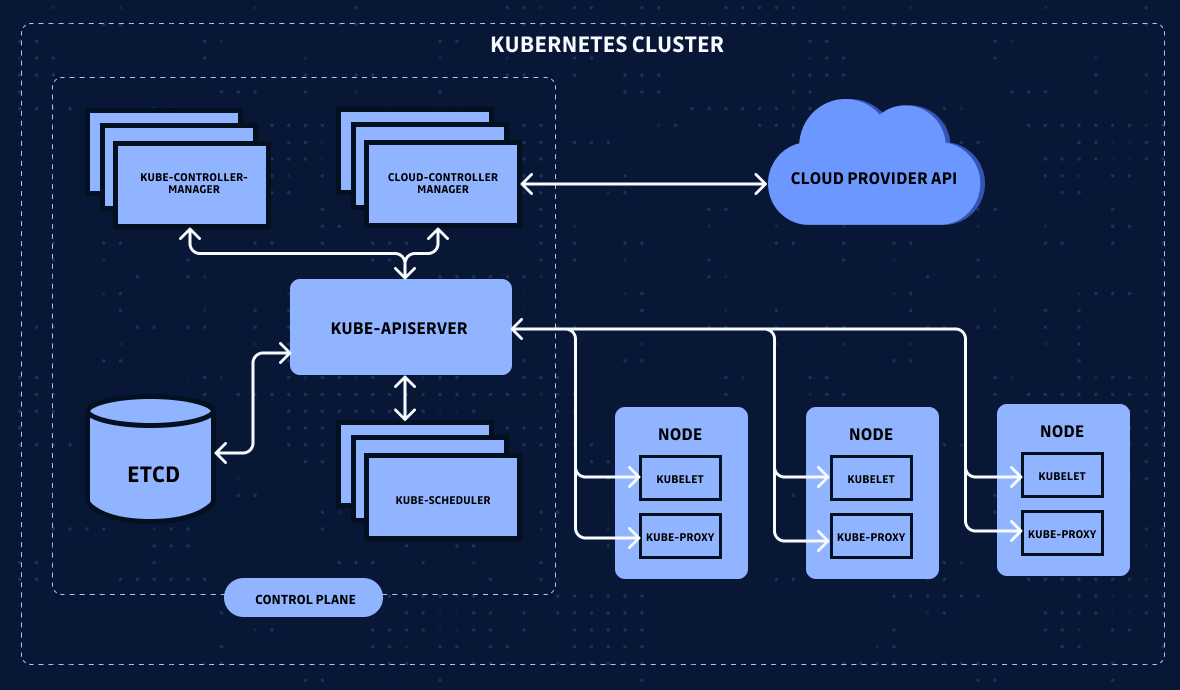 The control plane makes global decisions about the cluster (for example, scheduling) and detects and responds to cluster events (for example, starting up a new pod when a deployment's replicas field is unsatisfied).

The major control plane components are:

The first part of the NSA/CISA guide is about presenting their Threat Model, which is structured by three categories:

The supply chain encompasses any element that makes up the end product, which can mean a lot of things! From components to third-party services or software used to manage a cluster, these risks arise from a lot of sources and are often challenging to mitigate.

On the container/application level, a malicious container, a known security leak from a third-party library, or even a single line of a dangerous function call could provide hackers with a way into the cluster. Secrets forgotten in source code are one of the favorite attack vectors because they are often very easy to recover and exploit.

On the infrastructure level, the software and libraries running in the worker node could also have vulnerabilities that the hackers could potentially exploit to get into the system.

Malicious threat actors can exploit vulnerabilities and misconfigurations in components of the Kubernetes architecture, such as the control plane, worker nodes, or containerized applications.

Worker nodes run the container engine, kubelet, and kube-proxy service, which are potentially exploitable by hackers as well.

On the app level, the containers running inside the cluster are common targets as well. Many apps are frequently accessible outside of the cluster, making them reachable remotely. A hacker can then start from an already compromised Pod, escalate privileges within the cluster, and access more.

Insider threats can be administrators, users, or even cloud service providers. Insiders with special access to an organization's Kubernetes infrastructure may be able to abuse these privileges.

For example, admins may have control over running containers and the ability to execute arbitrary commands inside containerized environments. RBAC authorization can help reduce the risk by restricting access to sensitive capabilities, but it could be misconfigured. What's more, admins often have physical access to the systems or hypervisors, which could also be used to compromise the Kubernetes environment.

You should now be familiar with the NSA/CISA threat model, and how they can relate (more or less specifically) to the distinct components found in Kubernetes.

Keep in mind that this model is not unique, and if you are interested in this topic, you should definitely check the CNCF financial user group one, which takes a distinct approach to the same topic.

Published at DZone with permission of Tiexin Guo. See the original article here.