A colleague recently told me about several benefits of Cassandra and I decided to try it out. Apache Cassandra is described in A Quick Introduction to Apache Cassandra as "one of today’s most popular NoSQL-databases." The main page for Apache Cassandra states that the "Apache Cassandra database is the right choice when you need scalability and high availability without compromising performance." Cassandra is being used by companies such as eBay, Netflix, Adobe, Reddit, Instagram, and Twitter. This post is a summary of steps for getting started with Cassandra.

The next screen snapshot shows the directory listing for the "bin" directory of the Apache Cassandra included with the DataStax Community Edition installation. 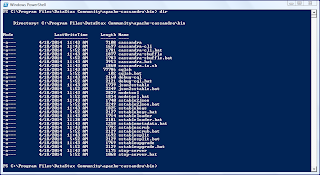 From that "bin" directory, the Cassandra server can be started simply by running the appropriate executable. In the case of this single Windows machine, that command is cassandra.bat and this step is illustrated in the next screen snapshot. 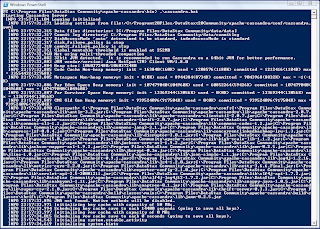 The interactive command-line tool cqlsh is also located in the Apache Cassandra "bin" subdirectory. This tool is similar to SQL*Plus for Oracle databases, mysql for MySQL databases, and psql for PostgreSQL. It allows one to enter various CQL (Cassandra Query Language) statements such as inserting new data and querying data. Starting cqlsh from the command line on a Windows machine is shown in the next screen snapshot.

There are several useful observations that can be made from the previous image. As the output of from starting cqlsh shows, this version of Apache Cassandra is 2.0.7, this version of cqlsh is 4.1.1, and the relevant CQL specification is 3.1.1. The immediately previous screen snapshot also demonstrates help provided by running the "HELP" command. We can see that there are several "documented shell commands" as well as even more "CQL help topics."

In this screen snapshot, we see CQL data types that are supported in cqlsh such as ascii, text/varchar, decimal, int, double, timestamp, list, set, and map.

Keyspaces are significant in Cassandra. Although this post covers Cassandra 2.0, the Cassandra 1.0 documentation nicely explains keyspaces in Cassandra: "In Cassandra, the keyspace is the container for your application data, similar to a schema in a relational database. Keyspaces are used to group column families together. Typically, a cluster has one keyspace per application." This documentation goes on to explain that keyspaces are typically used to group column families by replication strategy. The next screenshot demonstrates creation of a keyspace in cqlsh and listing the available keyspaces. 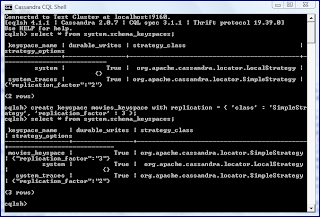 With a keyspace created, a column family (or table) can be created. The next screen snapshot demonstrates using the newly created movies_keyspace with the use movies_keyspace; statement and then shows using the cqlsh command SOURCE (similar to using @ in SQL*Plus) to run an external file to create a table (column family). The screen snapshot demonstrates listing available tables with the desc tables command and listing specific details of a given table (MOVIES in this case) with the desc table movies command. 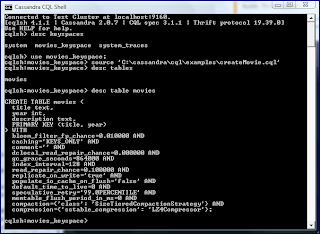 The above screen snapshot demonstrated running an external file called createMovie.cql using the SOURCE command. The code listing for the createMovie.cql file is shown next.

Inserting Data into and Querying from the Column Family

The next screen snapshot demonstrates how to insert data into the newly created column family/table [insert into movies_keyspace.movies (title, year, description) values ('Raiders of the Lost Ark', 1981, 'First of Indiana Jones movies.');]. The image also shows how to query the column family/table to see its contents [select * from movies].

Cassandra is NOT a Relational Database

The Cassandra Data Model is a page in the Apache Cassandra 1.0 Documentation that describes some key differences between Cassandra and relational databases. These include:

I've just begun to get my feet wet with Cassandra but look forward to learning more about it. This post has focused on some basics of acquiring and starting to use Cassandra. There is much to learn about Cassandra and some "deeper" topics that really need to be understood to truly appreciate Cassandra include Cassandra architecture (and here), Cassandra Data Modeling (and here), and Cassandra's strengths and weaknesses.