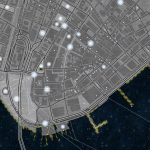 an increasing number of cities around the world are embarking on efforts to become smarter, with various open data sets underpinning these efforts.  just as many companies are struggling to attract the data scientists required to fulfill their data-ridden ambitions, the same is perhaps true of our city officials.

to try and help out, the open-source mapping platform mapbox is helping departments both collect the right data, and then make effective use of it.

the company is launching a new service, called mapbox cities , to an initial cohort of three cities from around the world who would like help making better use of their data and solve the prickliest of urban challenges.

“it’s very much an experimental approach to working with cities,” they say. “a lot of cities have open-data platforms but they don’t really do something with the data. so we’re trying to bridge that gap.”

the platform has a long track record of using data in innovative ways.  for instance, they were invaluable during hurricane sandy in helping new yorkers find shelter or in producing road safety maps for the whole of the us.

the platform isn’t just for city institutions, however, as they also do a significant amount of work with humanitarian organizations, with free access provided to its array of resources and hope to bring the same resources to bear on a city near you.

“we’re doing something similar without the need for an emergency,” they say. “let's find cities where we can really develop an in-depth relationship, understanding what they’re trying to achieve. and can we go even further, in terms of providing ideas and solution, than what they were thinking themselves?”

suffice to say, we’re at such an early stage with smart cities that we have only scratched the surface of what’s possible, but projects like this will undoubtedly help us along that journey by lowering the bar to entry regarding who can actually begin experimenting with open data.

mapbox themselves hope that the initial cohort will provide them with plenty of insights to allow the next generation to work even more effectively with the platform.