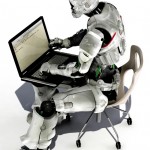 there is no shortage of books, articles, studies and guides on how to become a better manager.  pretty much without fail, these attempts to improve management assume that the manager in question will be a human being.

what if your next boss was actually an algorithm?  for the likes of a driver on uber, that is already the case.  this kind of scenario was examined in a recently published paper , with the new dynamics between human and boss explored.

uber has already attracted significant attention to its business model in the courts, with various legal challenges to the rights (or lack of) given to drivers using the platform.

the authors wanted to examine whether the promise of being ones own boss really materialized in a world where so much of the behavior of drivers is driven by algorithms.

the whole uber process is largely human free, with drivers interacting primarily with the automated management system embedded within the mobile app.

this automated manager will assign them pickup requests, given them feedback on their performance, both in terms of their workload and passenger satisfaction, and even punishing them for not maintaining standards.

this algorithm will often prompt drivers to work as they can predict a surge in usage in the coming days.

suffice to say, it’s a level of prompting that doesn’t sit well with all drivers.

“uber says it wants to act as a neutral intermediary that connects supply and demand with an automated mechanism for finding the right price,” the authors say. “it’s difficult to argue that you’re a neutral platform if you’re actively trying to manage supply and demand.”

the feedback from users is also a strong lever to cajole drivers into good behavior, as low scoring drivers are struck off of the system.  the automated managers periodically send out reminders and advice to drivers on how they can boost their ratings.

there is an increasing interest in these kind of automated management systems, with a previous study from researchers at carnegie mellon suggesting that most of the time people are happy with an automated manager.

or at least, they were so long as things were running smoothly.  when there were disagreements, then the relationship broke down quite rapidly.

as data becomes a more pervasive part of the workplace, and a wider range of our behaviors are tracked at work, it seems possible that this kind of algorithmic management could become more widespread.

how would you feel about having an automated manager?