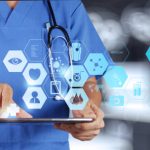 Last year, I wrote about an interesting study exploring how doctors perceive the electronic health records (EHR) that are making their way into hospitals around the world.

The study quizzed doctors on their perceptions of the impact EHRs had on patient engagement levels. It found that doctors were often anything but complimentary about them, citing higher levels of burnout and a depersonalization of their work.

"Physicians who are burnt out provide lower-quality care," the authors say. "What this speaks to is that we, as physicians, need to demand a rethinking of how quality is measured and if we're really getting the quality we hoped when we put in EHRs. There are unintended consequences of measuring quality as it's currently being done."

What's more, the poor communication EHRs can often ensure can reduce the effectiveness of treatment plans, with patients less likely to engage in follow-up visits. Despite this, however, doctors appreciate that EHRs can provide numerous benefits and are undoubtedly here to stay.

A recent study from the University of Missouri raises similar concerns among the nursing community. The study found that workflow interruptions were most likely in the emergency room when nurses were documenting cases in electronic medical records.

The researchers conducted a time and motion study that tracked a group of experienced nurses as they went about their work over the course of a week. Their most frequent tasks were broken down into eight broad categories, including direct care, documentation and social breaks. They also recorded the most common interruptions to the nurses' work, with the most common disruptions including phone calls and talking with colleagues.

This data was then used to create a couple of simulation models. The first of these illustrated the efficiencies possible when the nurses weren't interrupted, whilst the second then illustrated the impact interruptions had.

"Our study showed that ED nurses should be trained to avoid answering questions or non-emergency phone calls while delivering direct care to patients and while engaged in EMR documentation," the authors conclude. "Also, relatives of patients should allow the healthcare worker to perform critical duties without interruption."

As EMR systems become more commonplace, it's clear that hospitals are still struggling to integrate them into workflows without disrupting the efficiency of teams.