Recently I’ve been playing with Windows PowerShell 2.0 again, in the context of my day-to-day activities. One hint should suffice for the reader to get an idea of what’s going on: push-based collections. While I’ll follow up on this subject pretty soon, this precursor post explains one of the things I had to work around.

PowerShell: a managed application or not?

Being designed around the concept of managed object pipelines, one may expect powershell.exe to be a managed executable. However, it turns out this isn’t the case completely. If you try to run ildasm.exe on the PowerShell executable (which lives in %windir%\system32\WindowsPowerShell\v1.0 despite the 2.0 version number, due to setup complications), you get the following message:

So much for the managed executable theory. What else can be going on to give PowerShell the power of managed objects. Well, it could be hosting the CLR. To check this theory, we can use the dumpbin.exe tool, using the /imports flag, checking for mscoree.dll functions being called. And indeed, we encounter theCorBindToRuntimeEx function that’s been the way to host the CLR prior to .NET 4’s in-process side-by-sideintroduction (a feature I should blog about as well since I wrote a CLR host for in-process side-by-side testing on my prior team here at Microsoft). 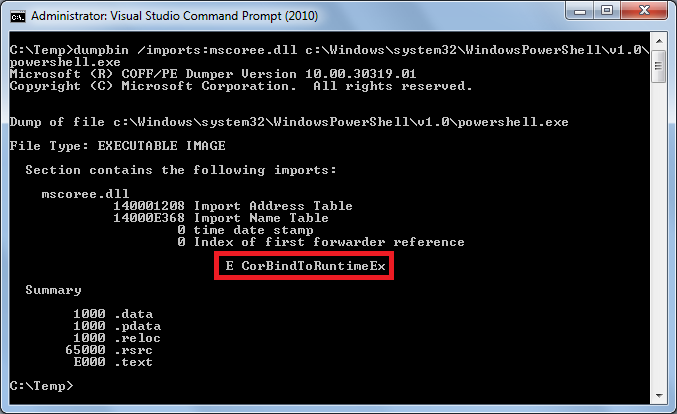 One of the parameters passed to CorBindToRuntimeEx is the version of the CLR to be loaded. Geeks can use WinDbg or cdb to set a breakpoint on this function and investigate the version parameter passed to it by the PowerShell code:

Notice the old code name of PowerShell still being revealed in the third stack frame (from the top). In order to hit this breakpoint on a machine that has .NET 4 installed, I’ve used the mscoreei.dll module rather than mscoree.dll. The latter has become a super-shim in the System32 folder, while the former one is where the CLR shim really lives (“i” stands for “implementation”). This refactoring has been done to aid in servicing the CLR on different version of Windows, where the operating system “owns” the files in the System32 folder.

Based on this experiment, it’s crystal clear the CLR is hosted by Windows PowerShell, with hardcoded affinity to v2.0.50727. This is in fact a good thing since automatic roll-forward to whatever the latest version of the CLR is on the machine could cause incompatibilities. One can expect future versions of Windows PowerShell to be based on more recent versions of the CLR, once all required testing has been carried out. (And in that case, one will likely use the new “metahost” CLR hosting APIs.)

The obvious question with regards to some of the stuff I’ve been working on was whether or not we can run .NET v4 code in Windows PowerShell v2.0? It shouldn’t be a surprise this won’t work as-is, since the v2.0 CLR is loaded by the PowerShell host. Even if the hosting APIs weren’t involved and the managed executable were compiled against .NET v2.0, that version’s CLR would take precedence. This is in fact the case for ISE: 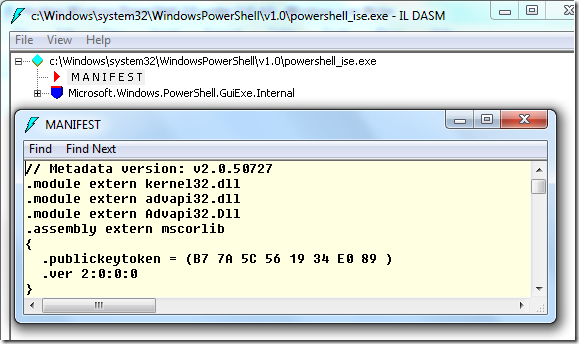 Trying to load a v4.0 assembly in Windows PowerShell v2.0 pathetically fails – as expected – with the following message:

So, what are the options to get this to work? Let’s have a look.

Warning:  None of those hacks are officially supported. At this point, Windows PowerShell is a CLR 2.0 application, capable of loading and executing code targeting .NET 2.0 through .NET 3.5 SP1 (all of which run on the second major version of the CLR).

If we just need an ad-hoc test of Windows PowerShell v2.0 running on CLR v4.0, we can take advantage of WinDbg once more. Simply break on the CorBindToRuntimeEx and replace the v2.0.50727 string in memory by the v4.0 version, i.e. v4.0.30319. The “eu” command used for this purpose stands for “edit memory Unicode”:

If we let go the debugger after this tweak, we’ll ultimately get to see Windows PowerShell running seemingly fine, this time on CLR 4.0. One proof is the fact we can load the .NET 4 assembly we tried to load before:

Another proof can be found by looking at the DLL list for the PowerShell.exe instance in Process Explorer: 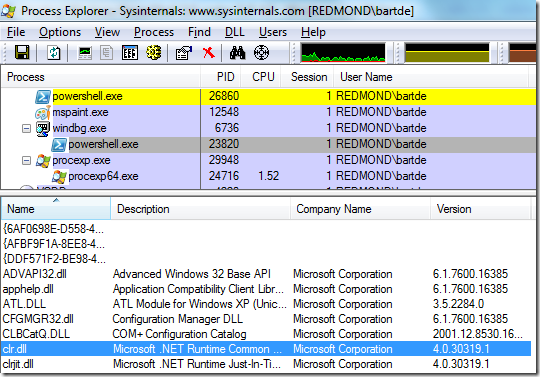 No longer we see mscorwks.dll (which is indicative of CLR 2.0 or below), but a clr.dll module appears instead. While this hack works fine for single-shot experiments, we may want to get something more usable for demo and development purposes.

Note:  Another option – not illustrated here – would be to use Detours and intercept the CorBindToRuntimeEx call programmatically, performing the same parameter substitution as the one we’ve shown through the lenses of the debugger. Notice though the use of CorBindToRuntimeEx is deprecated since .NET 4, so this is and stays a bit of a hack either way.

The second option we’ll explore is to host Windows PowerShell ourselves, not by hosting the CLR and mimicking what PowerShell.exe does, but by using the APIs provided for this purpose. In particular, theConsoleShell class is of use to achieve this. Moreover, besides simply hosting PowerShell in a CLR v4 process, we can also load snap-ins out of the box. But first things first, starting with a .NET 4 Console Application, add a reference to the System.Management.Automation and Microsoft.PowerShell.ConsoleHost assemblies which can be found under %programfiles%\Reference Assemblies\Microsoft\WindowsPowerShell\v1.0: 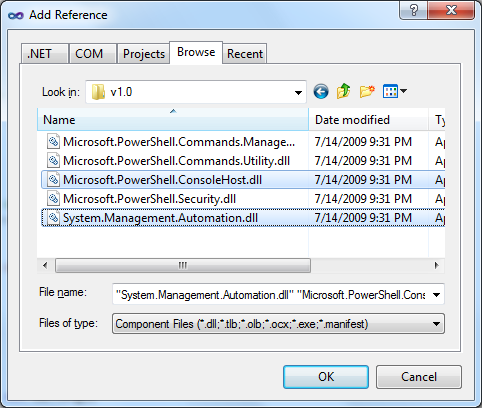 The little bit of code required to get basic hosting to work is shown below:

Using the RunspaceConfiguration object, it’s possible to load snap-ins if desired. Since that would reveal the reason I was doing this experiment, I won’t go into detail on that just yet :-). The tip in the introduction should suffice to get an idea of the experiment I’m referring to. Here’s the output of the above:

While this hosting on .NET 4 is all done using legitimate APIs, it’s better to be conservative when it comes to using this in production since PowerShell hasn’t been blessed to be hosted on .NET 4. While compatibility between CLR versions and for the framework assemblies has been a huge priority for the .NET teams (I was there when it happened), everything should be fine. But the slightest bit of pixy dust (e.g. changes in timing for threading, a classic!) could reveal some issue. Till further notice, use this technique only for testing and experimentation.

Enjoy and stay tuned for more PowerShell fun (combined with other technologies)!