Agile is great, agile is terrible, no you're just doing it wrong, Scrum is the best, that meeting is not a scrum, it will take however long it takes, that's not good enough why do you not care about customers, have you ever even written code, what about Extreme Anarchic Behavior-Driven Feature-Flagged ScrumBanSecUXOps (EABDFFSBSUXO)?

These kinds of experience-driven debates are good for communicating within teams and within organizations. But it's hard to generalize anecdotes about something whose objective measurements are notoriously expensive (function point analysis or bust..well we have a budget, guess it's bust) or gameable (we need higher velocity by story points? man, you know, polymorphism is hard, let's add a story point multiplier for bothering about responsible inheritance) or misleading in isolation (cycle time is short but the new feature is just a function that converts CMYK to hex??) or just vague (can you really generalize business value across any set of firms? especially in a young problem domain?).

So let's steer between anecdotes you're tempted to ignore if they don't capture your experience and 'objective' metrics you probably won't believe anyway. How about subjective generalizations about 'agile' -- based on the reported experiences of the software development community at large?

We asked: Overall, how do you feel about Agile development and methodologies? 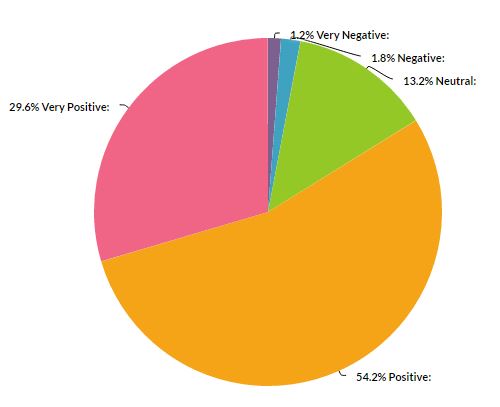 Huh. Sounds like general feelings around agile are pretty sunny. And these respondents aren't rah-rah blind process worshippers: 45% of survey respondents identified as having a development/engineering role; an additional (non-overlapping) 32% identified as developer team lead.*

*Yes, that 'developer team lead' phrasing can mean varying levels of hands-dirty-in-the-code, or even varying levels of general technical know-how. We're in the process of segmenting these responses by a few other variables, like years of general IT experience&'agile' experience, team size, preferred tech stack, and a few more. Will publish those results later -- some here, some in our next Agile/SDLC Guide, slated to release in October.

But, you say, 'agile' means so many things to so many different people! Whatever you want it to mean! I need to know more specifics.

So we asked: Which of these software development methodologies do you use, and how do you feel about them?

(Of course, that's just the top four. We asked about a lot more methodologies and techniques, but they didn't all fit here, and some free responses are going to take a bit of massaging to classify into additional methodology types. Stay tuned.)

So what do you think?

774 responses are pretty strong (assuming a worldwide developer population of just over 20 million and, of course, unbiased sample..though of course for all surveys in the bias lies the rub!). But maybe this doesn't fit your experience..or maybe it does, and you have your own experience-driven thoughts on why.

Leave responses in the comments, or email me if you'd like to talk about more elaborate dives into the data.