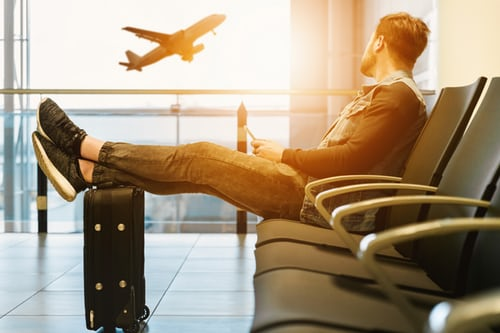 Artificial intelligence (AI) has been taking over businesses in recent years. With AI-powered tools, businesses large and small can speed up processes, become more productive and efficient, and grow their revenue as well. For instance, AI tools can be used for everything from improving customer service to creating engaging marketing content. These powerful AI tools are not only beneficial for businesses but for customers too. And it’s only a matter of time before artificial intelligence is integrated into nearly every part of businesses and our lives.

In fact, AI-powered tools will soon be heading to airports around the world. According to SITA, 66% of airlines and 79% of airports are planning to implement AI by 2021. But, these airlines and airports aren’t just going to use AI-powered chatbots for customer service. They’re going to use AI to improve security, which could mean a more secure traveling experience and less time standing in airport security lines for you.

Here’s how airports are using AI to improve security.

Currently, humans are responsible for detecting potential risky behavior in passengers. Plus, they have to evaluate this behavior at a single point in time rather than looking at someone’s behavior over a period of time, which leaves a lot of room for error. But in the future, experts believe that with artificial intelligence, that screening process can be transformed into a full 360-degree view of a person’s behavior over an extended period of time. This could be done by collecting data from security screenings, behavior tracking, booking and travel history, and more. So, the security of passengers and the public wouldn’t only rely on a person’s judgment, rather risky behavior could be identified with end-to-end data.

Technology like this could be used to quickly detect terrorist behaviors but it could also be used to detect disgruntled passengers or airport/airline employees. So, while this technology is not in place yet, in the future we could see a huge improvement in the detection of possible security threats.

Aside from detecting potential risky behavior, with artificial intelligence airports and airlines can quickly and more effectively detect weapons. And this technology is actually currently being used and could come to an airport near you soon.

For instance, Canada’s busiest airport, Toronto’s Pearson International Airport (YYZ), will soon begin using artificial intelligence-powered technology to detect weapons. This AI technology, known as Hexwave, is able to detect metallic and non-metallic weapons including guns, knives, explosives, and so on — even ceramic knives and plastic explosives can be detected. How does it work? Well, the tool first captures 3D radar images, which essentially identifies any items on a person’s body that don’t belong on a body, according to Bill Riker, CEO of Liberty Defense Holdings Inc. Then, the tool analyzes those images to search for any signs of a weapon concealed under clothing. Hexwave can also detect weapons in bags and luggage as well. These Hexwave units will be placed outside of airport terminals so that threats can be detected before they even get inside.

While AI-powered security tools like full-body scanners, behavior analysis, and face recognition may be unnerving to some, they’re necessary tools to prevent threats and keep passengers safe. With the power of artificial intelligence, airports and airlines will soon be able to improve security and provide a better customer experience to travelers at the same time. And AI-powered security tools are constantly advancing, so there’s no telling what more they’ll be able to do in the near future.