Traditional microscopy is now a thing of the past. Artificial Intelligence (AI) and all its implications of Machine Learning are poised to revolutionize the way in which Pathology will be viewed and defined. With the conventional modes of diagnosis being replaced by technologically advanced digital tools and software opens up a plethora of opportunities toward medical advancement. With larger volumes of data, newer technological methods and endless resources that are available to pathologists at lower costs, AI in pathology is set to achieve many laurels that were previously considered impossible. Lab testing with Artificial Intelligence translates into intelligent algorithms that are capable of identifying general and specific patterns that can then offer logical and reliable predictions toward patient diseases.

Pathology in the "digital" world further allows long-distance association. This means that sending digital material from one end of the world to another comes bereft of constraints such as tampering. Through this association, the possibilities of collaboration are extended and lab growth is enhanced through increased access to specialists around the world. However, Artificial Intelligence in digital pathology cannot be looked at as a replacement for pathologists. Intelligent technologies, Artificial Intelligence for medical tests, and AI-based diagnostics in healthcare are only tools to increase the efficiency of human pathologists and cannot be looked at as an individual entity.

Pain-Points in the Current Pathology Scenario

According to the National Cancer Institute, “A pathology report is a document that contains the diagnosis determined by examining cells and tissues under a microscope. The report may also contain information about the size, shape, and appearance of a specimen as it looks to the naked eye. This information is known as the gross description.

A pathologist is a doctor who does this examination and writes the pathology report. Pathology reports play an important role in cancer diagnosis and staging (describing the extent of cancer within the body, especially whether it has spread), which helps determine treatment options.”

The conventional method of pathology begins when a physician or a clinician performs a biopsy on a patient and sends these samples to a pathological lab for testing. Let’s pursue this through an example. John Smith approaches a clinic with the complaint of a tumor in his left leg. The physician then prescribes for a surgery to take place that will remove a part of or the entire tumor, which is then sent for lab testing. Thus, begins the pathology process.

Upon receiving the specimen, the laboratory deploys the services of a licensed histotechnician to analyze the biopsy. This is undertaken through processing the tissue, embedding the specimen into a cassette, then the tissue is cut, fixated into a slide, the slide is stained and a coverslip is placed with the slide. This slide is then handed over to a pathologist, along with the coverslip and a report that details the John Smith’s demographics, the type of biopsy performed on the tumor, the area of the tumor, the physician’s description, and the initial report. With this information, along with a microscopic analysis of the slide, the pathologist then provides a diagnosis and a description of the findings through microscopic inspection. This diagnostic report is then sent back to John Smith’s physician for further action. AI-based diagnostics are capable of transforming this process towards increased efficiency through its lab testing device. 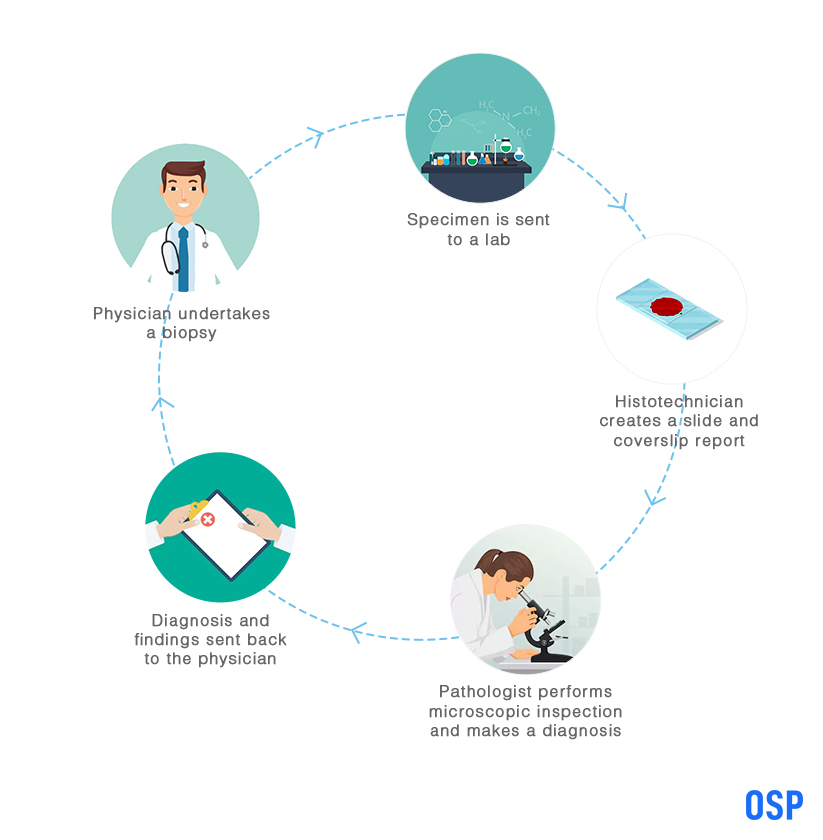 Challenges With the Traditional System

AI in pathology is the answer to every woe faced by healthcare pathology. The efficiency of lab testing with Artificial Intelligence is undeniably higher through the use of intelligent machines that are embedded with software for digital imaging. When it comes to diagnostics, AI-based diagnostics through AI-based diagnostic devices offer a shorter turnaround time than traditional microscopic testing.

Further, the possibility of errors is reduced through quality control of digital pathology software. One of the biggest advantages of AI in digital pathology is the ability of pathologists to send data and images to different specialists around the globe that enhances research, diagnosis and collaborative diagnosis, without the need to physically move the specimen from one location to another. The automated features of AI in pathology, including AI for medical tests, reduce manual errors that are often witnessed in physical inspections.

Finally, with the reduction in pathology specialists being educated around the globe, Artificial Intelligence in medical testing and diagnosis allows for a favorable amount of research and quality education through the record of a large number of case studies. The automated nature of digital pathology that is empowered with Artificial Intelligence will, moreover, allow a pathologist to increase their productivity by a considerable margin by reducing the manual process and mundane sections of pathology report generation. Machine Learning will make diagnosis more accurate and prompt.

The AI Process of Pathology 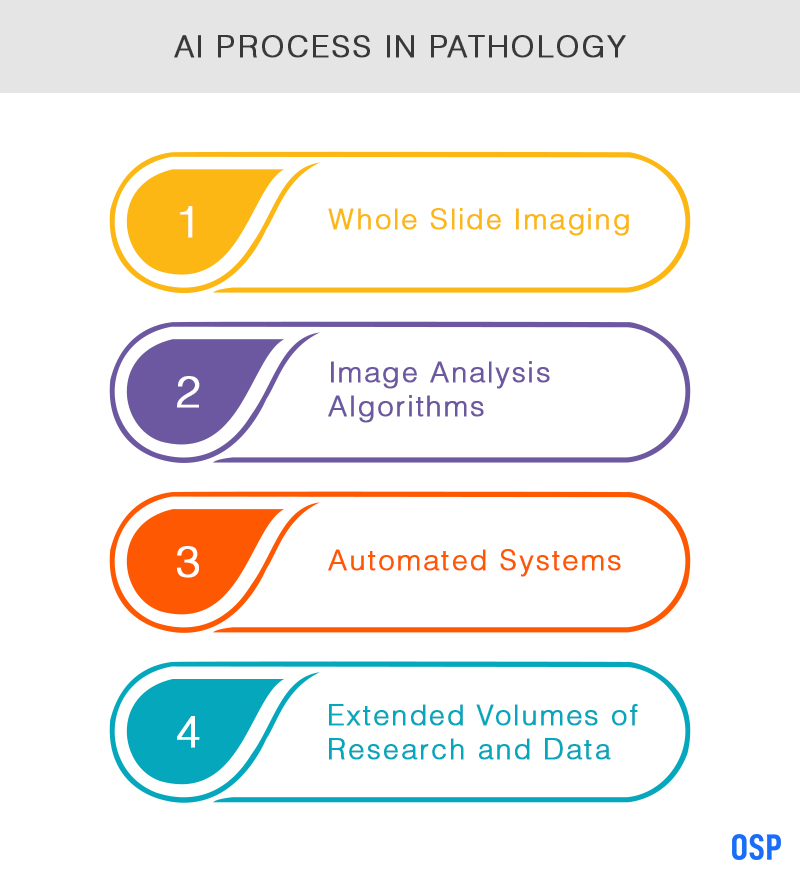 Broadly speaking, there are eight overarching features of digital pathology, within which Artificial Intelligence lends itself. They are as follows:

According to a published report from NCBI, “The introduction of digital pathology to nephrology provides a platform for the development of new methodologies and protocols for visual, morphometric and computer-aided assessment of renal biopsies. Application of digital imaging to pathology made substantial progress over the past decade; it is now in use for education, clinical trials, and translational research. Digital pathology evolved as a valuable tool to generate comprehensive structural information in digital form, a key prerequisite for achieving precision pathology for computational biology. The application of this new technology on an international scale is driving novel methods for collaborations, providing unique opportunities but also challenges. Standardization of methods needs to be rigorously evaluated and applied at each step, from specimen processing to scanning, uploading into digital repositories, morphologic, morphometric and computer-aided assessment, data collection and analysis.”

The acceptance of the advantages towards Artificial Intelligence in pathology are being realized, albeit slowly. Even with the compelling advantages of AI-based diagnostics and image rendition, the adoption is far from universal. There is basic skepticism towards new technologies when it comes to diagnosis and the comfort level of traditional pathologists to work with conventional models. Further, none of the above-mentioned image-related processes have been nationally standardized, which is a major hurdle towards universal adaptation and routine clinical work. Through standardization of image capturing and rendition, pathologists around the globe can follow the universal steps in a consistent fashion. The NCBI publication emphasizes, “Standardization of every step in pre-analytic, analytic and post-analytic phases is crucial to achieving reliable and reproducible results across multiple groups of users.”

Another reason for hesitancy is the assumed cost involved in the implementation of the technology. However, if the advantages are weighed against the cost of Artificial Intelligence that latter seems to win quite easily. Laboratories also need to be upgraded, be it the storage size of their computer or the necessary equipment, for the adoption of digital pathology. However, the report further adds, “As digital imaging technology becomes more sophisticated and financially feasible, medical centers have shown increasing interest in introducing digital pathology in their daily practice. Adoption of this new technology was facilitated by advances in biomedical research, an area that has expanded to encompass biomedical engineering, computer science, image analysis, and clinical informatics.”

Published at DZone with permission of Garron Jhonson. See the original article here.