The voice of the customer (VOC) is an IT Infrastructure Library (ITIL) term that describes the in-depth process of capturing customer expectations, preferences, and aversions. It is a market research technique that produces a detailed set of customer wants and needs, organized into a hierarchical structure, and then prioritized in terms of relevant importance and satisfaction with current alternatives. Originally developed in the UK as a series of books to explain procedures and best practices for the IT industry to follow, many organizations adopted disciplines from ITIL in their software delivery lifecycle (SDLC) and IT operations management (ITOM) practices.

For a quicker feedback mechanism, companies are adopting NPS® or Net Promoter Score. NPS surveys your software end users with one simple question: “How likely is it that you would recommend this company or product to a friend or colleague?” Software-as-a-service (SaaS) platform companies collect NPS from their customer base by layering a dynamic feedback footer bar in their web-based application. One popular product called Wootric enables customer surveys inside SaaS, mobile apps or websites with a snippet of JavaScript. Either VOC or NPS allows organizations to align company efforts around customer needs, desires and willingness to recommend a product and the company behind it. Both measurements help monitor trends, improve retention, increase referrals and prioritize the feature roadmap of customer-facing software.

The Adage “No News Is Good News” is a Fallacy

Feedback is critical for the software-defined enterprise practicing DevOps and Agile principles. Feedback loops are at the essence of high-performing software development teams. Feedback in the form of NPS or VOC help by enabling the following:

Let’s face it, we all expect mobile apps and websites to load instantly and questions or issues raised to the software vendors behind them to be acknowledged instantly. Have you ever wondered why most help desk systems have an option to provide an immediate e-mail response to tickets? The automatically generated response is designed to satisfy our desire for instant gratification. We feel better when someone acknowledges receipt of our complaint or feedback right away — even when the response doesn’t come from a human being.

Tools such as ServiceNow or ZenDesk are used by companies around the globe behind the scenes to manage problems, incidents and change requests with customer-facing software. Both are popular best-of-breed tools that manage customer service, internal support tickets, live chat, etc. What most people don’t realize is that software-defined enterprises often build an API interface between their proprietary SaaS platform and their chosen best-of-breed ITSM tool.

One example is an industry leading residential property management and tenant screening platform for landlords and real estate professionals called VerticalRent. When landlords or tenants sign up for VerticalRent’s cloud-based platform, they experience consistency in colors, fonts, copy, and software interface design. The software “just flows” and if end users have feedback or an issue, they click a question mark symbol in the menu bar to submit a ticket. What they don’t see is several other software applications working behind the scenes that are tied to VerticalRent via API calls.

Although JSON-based REST APIs are easy to work with and generally don’t cause issues, there is always an inherent risk when a point-to-point integration is established between two different systems. With software updates released on a bi-weekly basis, a developer could inadvertently impact the support ticket API that talks to the JSON-based REST API of ZenDesk. If the quality assurance and testing coverage don’t pick up on the defect caused by this developer, the marriage between VerticalRent and ZenDesk would fall apart.

Let’s take a quick look at the point-to-point integration between VerticalRent and ZenDesk:

VerticalRent’s internal policy is that a break-fix request from an end user requires a critical severity bug to be created in Azure DevOps (formerly known as Visual Studio Team Service). The ZenDesk integration offered in the Visual Studio marketplace was installed months ago by the VerticalRent team to help facilitate efficient communication between support and engineering teams. Users in both ZenDesk and Visual Studio Team Services can send private messages that are easily accessible by users in the other system, making it easy to track and manage communication about a customer issue. 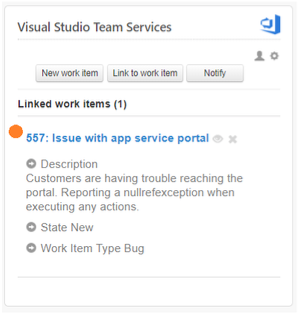 The problem is that the add-in’s service hooks in ZenDesk were reset during the last software update. The reset nullified the API token from ZenDesk to Azure DevOps and exception-based notification of issues like this are not built into most add-ins. As a small team, VerticalRent cannot afford to manually monitor and/or test every running API integration on a consistent basis. This reset went undetected and the urgent ticket never synchronized to Azure DevOps. The development and operations team remained disconnected for five business days before someone verbally called out the aging ticket in ZenDesk.

Situations like this occur frequently in software-defined enterprises. According to research done by Tasktop, most companies integrate three tools (e.g., ZenDesk, Visual Studio Team Services, and Microsoft Project) with four different artifacts (e.g., Ticket, Defect, Requirements, Test).  In VerticalRent’s case, only two products were integrated, but the effect was a disappointed customer and lost revenue. Imagine the implications for a system-wide issue or a multi-point failure between several systems in a large multinational conglomerate. Not only is the company’s reputation impacted with poor online reviews but without timely resolution of urgent tickets, the bottom line is impacted.

Improving Net Promoter Score and Voice of the Customer feedback scores could very well lie in an organization’s ability to orchestrate and integrate behind the scenes systems like ZenDesk, ServiceNow, Azure DevOps or JIRA.

Improving NPS With an Integration Layer

Platforms like Azure DevOps, JIRA and ZenDesk have created an economy for developers to create marketplace add-ons that enhance each product. Integration add-ons leverage RESTful APIs and Web Hooks to flow information from system-to-system. Case in point is the ZenDesk integration add-on available in the Visual Studio marketplace that allows users in both ZenDesk and Visual Studio Team Services to send private messages that are easily accessible by users in the other system.

Unfortunately, many add-ons are not continually tested for bugs, which translates into risk. It’s critical to choose an integration layer that is continuously tested to ensure that each new vendor release works and continues to works with each tool that it is connected to on an ongoing basis. This level of quality assurance is necessary to avoid behind the scenes breakdowns. By ensuring that your unseen tools are working in harmony, you mitigate the risk of upsetting a consumer and receiving a negative review.

An aging urgent ticket can spell disaster for a company’s Net Promoter Score, especially if it trends across many end users. Most point-to-point integrations lack real-time notifications (via email or SMS text) when an issue occurs. As such, you should choose an integration infrastructure that quickly escalates to the necessary response teams.

And make sure your integration infrastructure is designed to scale. The tool landscape of small and large software-defined enterprises expands as operations and customer requests grow. Companies like our example VerticalRent start with tools like Azure DevOps and ZenDesk to manage software delivery and operations. As they scale operations, they add tools like Micro Focus Fortify OnDemand for application security or SmartBear’s TestComplete for automated regression testing. Building individual point-to-point integrations back to Azure DevOps or ZenDesk becomes increasingly more complex as the business operations and toolchain expand. With the right integration infrastructure, software-defined enterprises have the foundation necessary to accommodate a wide array of tools as they grow.

Aligning company efforts around customer needs, desires and willingness to recommend a product and the company behind it are crucial to today’s business success. Doing so can improve retention, increase referrals and prioritize the feature roadmap of customer-facing software. But there is an inherent risk when point-to-point integrations are established between two different systems because integration failures can negatively impact NPS. So it’s important to ensure proper integration layers are added.