I have spent a lot of time trying to get my Windows Vagrant boxes as small as possible. I blogged pretty extensively on what optimizations one can make and how those optimizations can be automated with Packer. Over the last week, I've leveraged that automation to allow me to collect data on exactly how much each technique I employ saves in the final image. The results I think are very interesting. 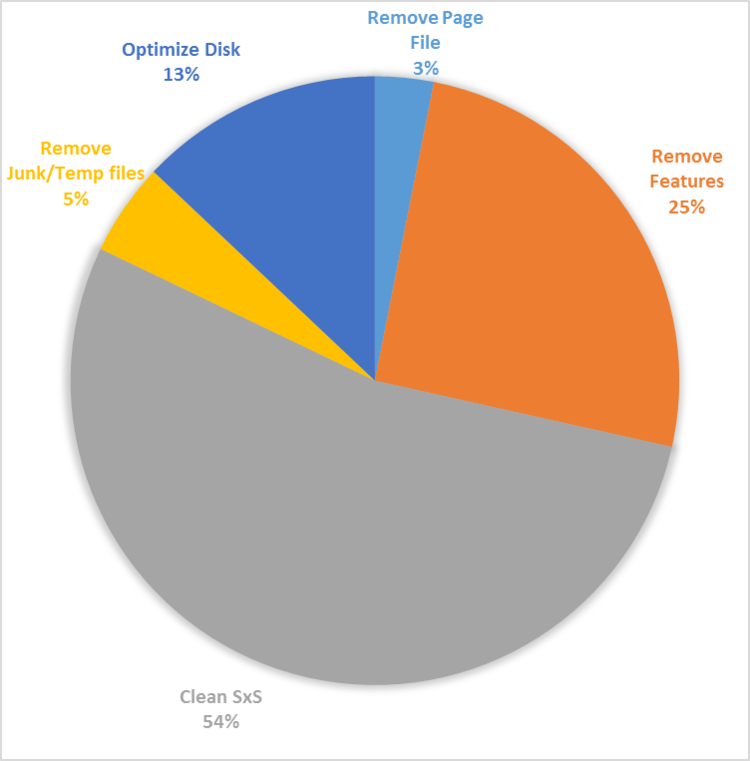 Diving Into the Data

The metrics above reflect the savings yielded in a fully patched Windows 2012 R2 VirtualBox base image. The total size of the final compressed .box Vagrant file with no optimizations was 7.71GB and 3.71GB with all optimizations applied.

I have previously blogged the details involved in each optimization and my Packer templates can be found online that automate this process. Let me quickly summarize these optimizations in order of biggest bang for buck:

The Importance of "0ing" Out Unused Space

This is something that is of particular importance for VirtualBox images. This is the act of literally flipping every unused bit on disk to 0. Otherwise, the image file treats this space as used in a final compressed .box file. The fascinating fact here is if you do NOT do this, you save NOTHING. At least for VirtualBox but not Hyper-V and that is all I measured. So our 7.71 GB original patched OS with all optimizations applied but without this step compressed to 7.71GB. 0% savings.

Let's not kid ourselves. As hard as we try to chip away at a Windows base image, we are still left with a beast of an image. Sure we can cut a fully patched Windows image almost in half but it is still just under 4 GB. That's huge especially compared to most bare Linux base images.

If you want to experience a truly small Windows image, you will want to explore Windows Nano Server. Only then will we achieve orders of magnitude of savings and enter into the Linux "ballpark". The Vagrant boxes I have created for nano weigh in at about 300MB and also boot up very quickly.

Your Images May Vary

The numbers above reflect a particular Windows version and hypervisor. Different versions and hypervisors will assuredly yield different metrics.

There Is Less to Optimize on Newer OS Versions

This is largely due to the number of Windows updates available. Today, a fresh Windows 2012 R2 image will install just over 220 updates compared to only 5 on Windows 2016 Technical Preview 5. 220 updates takes up a lot of space, scattering bits all over the disk.

Different Hypervisor File Types Are More Efficient Than Others

A VirtualBox .vmdk will not automatically optimize as well as a Hyper-V .vhd/x. Thus come compression time, the final vagrant VirtualBox .box file will be much larger if you don't take steps yourself to optimize the disk.