High egress cost often comes out as a surprise. As David explains, egress cost could potentially go unnoticed at the initial stages of estimating expenses for a solution. In 2017, Apple paid more than $50 million as egress cost according to the post. Hence it is clear the size of the data matters for the cost-effectiveness of a solution. Data is transmitted between two or more systems via protocols. Since the early 90s protocols such as HyperText Transfer Protocol (HTTP) have been evolving. Further new protocols emerged over the years i.e gRPC, Thrift, Websockets, NATs, etc. There will be instances where multiple protocols would be compatible with a given paradigm, giving the option for solution designers to make a choice i.e if intended to send binary data between systems, one could choose HTTP as well as gRPC, Thrift, etc. This choice could be critical. This article would unveil the influence protocols have towards the data size by first evaluating a few selected protocols for similarities (since similarities give the option to choose between them). Subsequently will evaluate how these protocols differ semantically and articulate some hidden advantages they bring to reduce the data size transmitted over the network. Finally will present how reduced data size could increase revenue, discuss some of the roadblocks that would lead to making the wrong choice of protocol and possible ways to overcome them.

Differences make life easy, narrow down the scope, and gives a clear idea on the potential of the protocol. When things look similar it is up to the solution designer to choose the protocol. The familiarity of a protocol could influence giving precedence to it. “If everything is an apple, I’ll rather use the apple in my own tree”. While this choice would allow building a working solution, it might not be the most optimum. As a result, businesses would lose tons of revenue. The next sections in the article will elaborate on this.

Over the network, all data is transferred as binary. Hence why would one need a binary protocol? while text protocols such as HTTP also allows sending binary data.

Dr. Lawlor in one of his lectures compared and contrasted between text and binary protocols. He emphasized that text protocols are more readable, supported by many programming languages, and easy to extend while binary protocols are more space and time efficient as opposed to the test protocols. The next sections will evaluate how space and time efficiency could be a key factor in the progress of the solution.

Applicability of both bidirectional i.e HTTP1.1 and unidirectional protocols i.e AMQP were discussed in my previous article. As illustrated in Figure 1 almost all the protocols support bidirectional communication. Hence it would also be essential to know what protocols suit best for a given solution. However, covering this will not be within the scope of this article.

Protocol vs Its Influence On Data Size

Text-based protocols represent their data in a human-readable format. As illustrated in Figure 1, HTTP and Websockets are text-oriented protocols.

As Lowler explains in his presentation and explained by Maggiore in his post, text-oriented protocols provide an advantage of better human readability of the data. However, as a drawback, it potentially increases the size of the data i.e encoding data to given char-set.

Further, when sending data typically over protocols such as HTTP/Websockets they’re structured into formats such as JSON or XML. These formats make data more readable, however, enclosing the data between tags and keys will expand the size of data further.

When the size increases the time taken to process a given message will proportionally increase. As opposed to binary protocols, text protocols cannot process data in parallel as blocks. Which will have an adverse effect on the latency as well.

Binary protocols have a more structured format as opposed to text protocols, however less readable. Hence these protocols can reduce the size of data transferred in comparison to text protocols. The following factors influence the reduced data size.

As elaborated earlier in the article, sending data as binary would save space as opposed to converting them into text. Typically binary data is represented in a fixed size (depending on the size of the variable it holds the value in the given programming language)

i.e consider a given input could contain a value between -2,147,483,648 and 2,147,483,647. If a programming language such as Java is used to send it over the network, this number would be represented by an Integer (4 byte fixed memory allocation) as referred here. Independent of its actual value a fixed memory size of 4 bytes (32 bits) will be occupied.

The value is represented as ASCII/UTF-8 text. (this could also be obtained from an online tool)

Type of Protocol vs Data Size

Following graph summaries the impact on data size over the choice of protocol. The data size was considered to contain the value “300” as elaborated in the earlier sections. 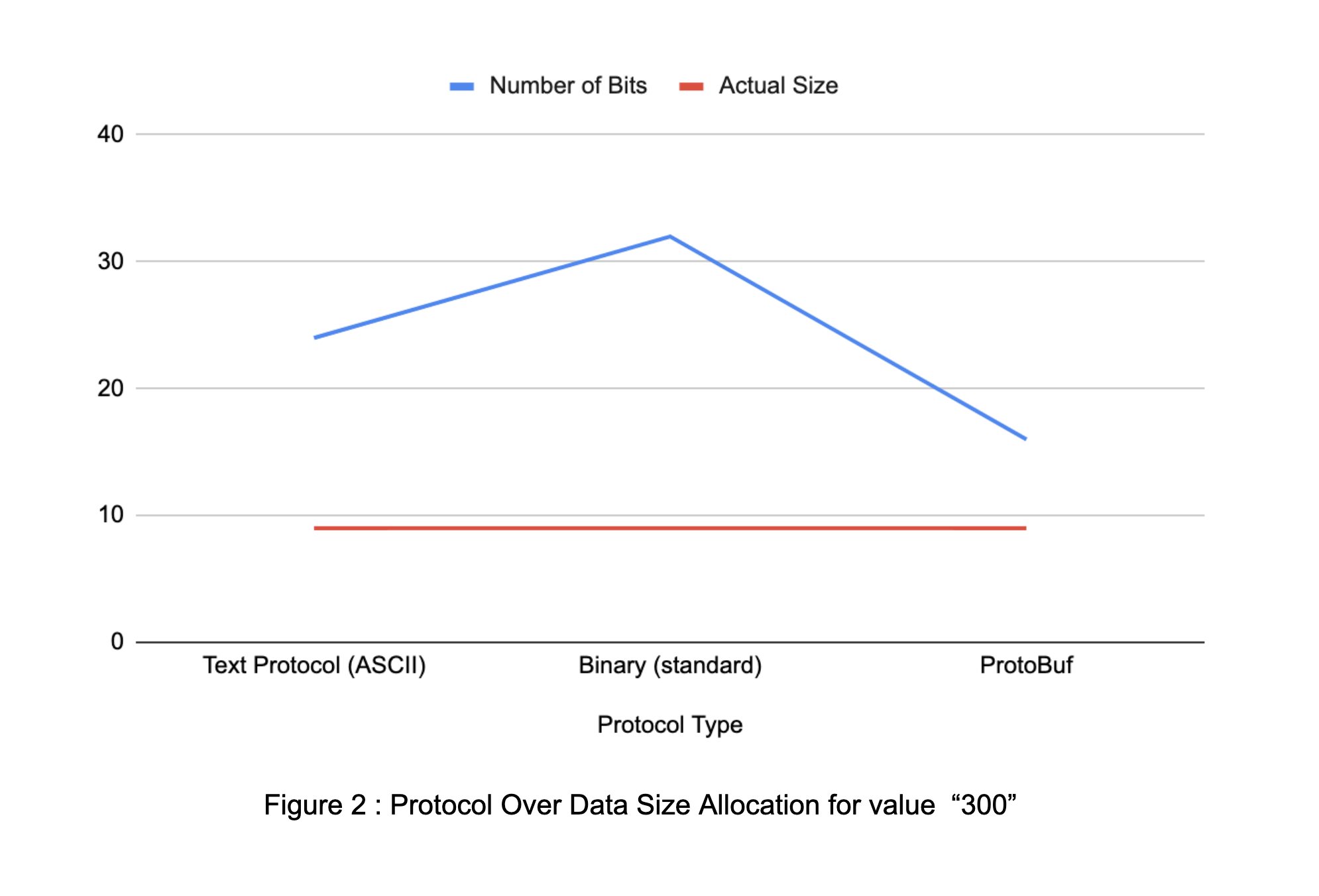 As illustrated in the graph. Binary protocols such as ProtoBuf optimizes data as opposed to other protocol options. Though text protocols show a better optimization as opposed to standard binary protocols for the value considered in this example when the value increases the standard binary protocols will maintain a fixed length while text protocols will proportionally increment its size. This was discussed in detail in the earlier section “Text Protocols”.Random codewalks also argue that for large data sets gzipped JSON would be more optimized as opposed to ProtoBuf. However, gzipping would be an extra step which will cost additional CPU, and also it has its own pros and cons as listed here.

Different protocols provide different levels of optimizations depending on the data transmitted. Hence it would be important to understand the data which is transmitted before choosing protocols for the solution. As the size of the data could influence the recurring cost.

Choice of Protocol vs Cost

For a given solution there might be an option for developers to choose between multiple protocols. The maturity of a protocol would have a strong influence over developer familiarity. However, familiarity should not lead to complacency. Figure 2 shown below depicts the maturity of protocols. Complacency should not get in the way of choosing the protocol which will be the most optimum i.e provided that HTTP is the most matured protocol in this comparison one might say it’s easier to transmit binary data as application/octet-stream overusing a protocol such as gRPC which uses ProtoBuf, this could be familiarity speaking. While HTTP does allow sending binary data it might not be the most optimum for the solution. As elaborated in the earlier section to identify the most optimum protocol for the given paradigm, the type of data which will be transmitted should be considered. Having an optimum solution will not only provide technical benefits. It’ll also reduce the cost of the overall solution by proving a better Return of Investment (ROI) for the business. The next section would explain this in detail. 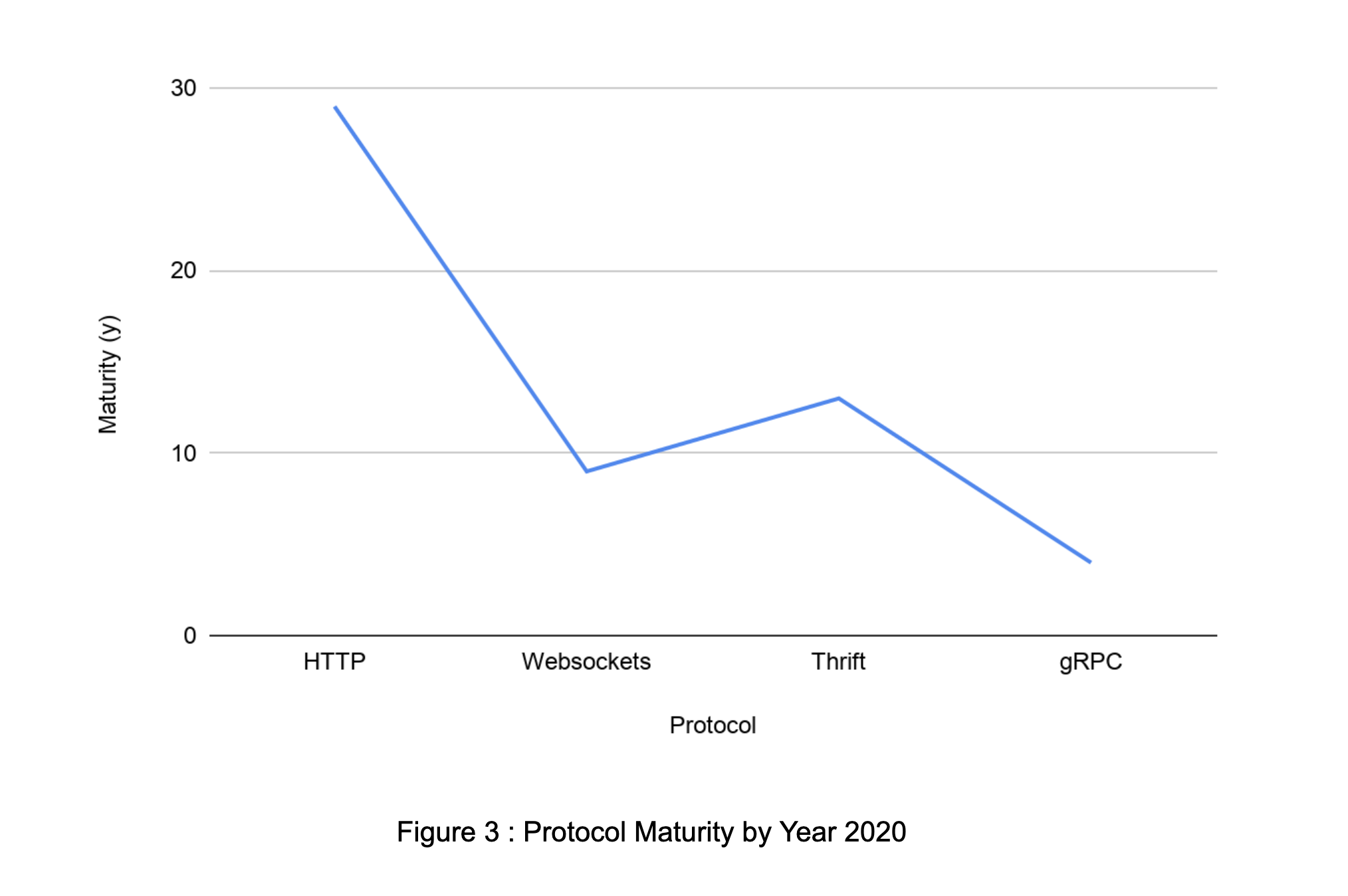 If the relative increase in size is tabulated from the results depicted in Figure 2. It would look like the following

Based on Figure 4, compared to standard, uncompressed binary protocol ProtoBuf data size would be 88.9% smaller. This would also mean if one pays ~2500$ for 25TB of data sent using a standard binary protocol, they will only need to pay (2500 * (177.7/355.5) = 1250$) if transferred through a protocol such as ProtoBuf, which is a ~50% cost saving. Hypothetically if that blue-chip brand paid 50 Million Dollars on data that looked similar to the dataset evaluated in that example with standard binary protocol, they could’ve saved closer to 25 Million Dollars replacing the protocol with Protobuf.

As elaborated earlier, egress cost could potentially be reduced with the choice of protocol. At the same time, it would also be important to introduce a productive environment for developers to easily write network applications so that familiarity will not be a stumbling block to choose the right protocol.

New programming languages such as BallerinaLang, GoLang, Rust, etc are emerging. Unlike general programming languages, these languages focus on having batteries included. For instance, the standard library of Ballerina includes all these network types and protocols as a part of it which will allow developers to rapidly build applications. This will reduce the learning curve developers will have to go through to configure an application to support a given protocol and will also provide the flexibility to easily switch between protocols. Hence getting familiar with such a programming language will be productive and would help minimize developer complacency.

Egress cost should not be neglected, in the long run, it could save an organization millions of dollars. Protocols have a strong influence over the egress cost. A lot of new protocols have emerged, many might support common functionalities and would be compatible to support a given solution. Factors such as developer complacency might influence making the wrong choice and more familiar protocols among the developers might have higher precedence. A wrong choice of protocol would negatively impact the Return of Investment (ROI) of a business. New programming languages support protocols as a part of the standard library. Which will positively influence developer productivity and would help reduce developer complacency.