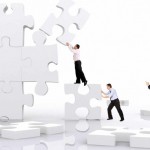 teams are a fundamental part of modern working life, so it stands to reason that there are many attempts to both better understand how teams function, and how teams can operate more effectively.

i wrote recently about one such attempt, which explored the role of trust in effective team working, and especially different levels of trust.  whether employees are trusting or not appeared largely irrelevant, so long as everyone was broadly speaking the same.  when they diverged, trouble was afoot.

the study used the five factor model (ffm) to help categorize personality that identifies the so called big five character traits of agreeableness, extraversion, neuroticism, openness to experience and conscientiousness.

“there are many ways to measure communication,” the authors say. “we wanted to look at the most basic level first—quantity—to see if that influenced the link between personality and team performance. now that we know that quantity does have influence, we can look at measuring other factors, such as quality, distractions, keywords and the like.”

the researchers asked a group of engineers to describe themselves in various situations.  they were quizzed on their particular communication style, including whether they were talkative, critical, thorough, stressed and so on.

once the questionnaire results were analyzed, the participants were divided into six teams based upon the personality characteristics revealed by the results.

the teams were then put into a task that was conducive to their skills and training.  participants were asked to identify aircraft as they appeared in a simulated radar game, with four distinct scenarios presented to users.

“the overall process for each team took three days—one day of psychometric testing, one day of training and one day of testing in the simulation—over the course of a few weeks in order to ensure the teams were set up for success,” the researchers say.

the researchers then crunched the output from the task and cross referenced them with the personalities of each participant.  the authors found that the communication styles had a big impact on the success of the teams.  they suggest that managers should take this into account when constructing their teams.

“ultimately, this study provided quantifiable relationships between how people communicate and how they behave—and perform,” the authors conclude. “the results of this research can help people in management positions assemble a team that will be successful, especially when there is a detailed, decision-based task to complete.”