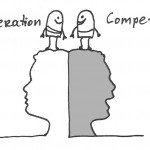 competition is widely believed to have a corrosive impact on trust, but what happens when that competition comes from a rival firm? does the external "threat" bind us together? that was the conclusion reached by a recent study from the university of british columbia, princeton university and aix-marseille university.

the researchers collected data from the manufacturing sector in both the united states and germany, and it emerged that the more intense the competition within the sector, the more likely it was for pro-social behaviors, such as cooperation and knowledge sharing, within each company.

"in competitive markets, employers unable to elicit such cooperative behavior are likely to be out-competed by those that are more successful in doing so," the authors say. "pro-social behavior from employees makes them more productive, which is good for business."

the team strove to try and replicate what they observed in the industry data in the lab environment, with participants playing the kind of public goods game commonly used in experimental economics. the game sees players making a choice between making a financial contribution to the collective pot, or keeping it for themselves.

the game was run a couple of times, with the first run through using a traditional setup, but the second manipulating the scenario so that competition between groups was increased.

when they analyzed the data, it emerged that the competitive version of the game saw much higher levels of cooperation and pro-social behavior within each team. what's more, team members reported higher trust levels with their teams.

the authors believe that competition between groups has a strong cultural background, which goes some way to explaining why we tend to cooperate more within a group that is threatened externally.