Join For Free
attention architectural gurus!  get ready to learn about how one company puts together its amazing datamining architecture, and hopefully you'll also walk away with some ideas of your own after reading todd hoff's new post on high scalability.

for the tl;dr crowd, i'll try to further summarize a simple look at the stack with some brief commentary:

that was nice and quick, but it'd be even nicer to have an illustration of interactions between these technologies, which is just as important as know the contents of the stack.  well datasift has provided that too: 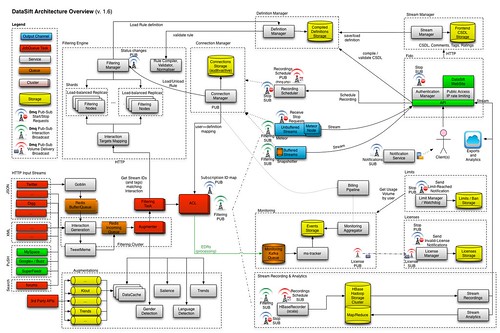 the full sized version is here .

from todd hoff, here is what he says is the point of it all:


and this only scratches the surface of this excellent post.  i encourage you to flag this post for more in-depth reading later.  there's tons of good info that i didn't even touch on.