The emergence of cloud-native development and containers has redefined how software is developed. But not all organizations have the resources or expertise to set up the required infrastructure to support a containerized application. Luckily, cloud vendors offer Containers-as-a-Service to help developers to capitalize on the benefits of cloud native development.

All three leading cloud providers have CaaS products but choosing the right one can be a challenge. While everyone has different requirements, it is always beneficial to understand what solutions others are using and why, to help inform decisions.

Based on research from /Data's recent Developer Economics survey, we have discovered that there are a few factors that drive developers to choose one CaaS over another:

While there were other reasons for developers to consider when adopting a platform, the percentage of developers that considered these four factors important is noticeably different across the three leaders. Some of the other sixteen factors that are tracked in the research include: 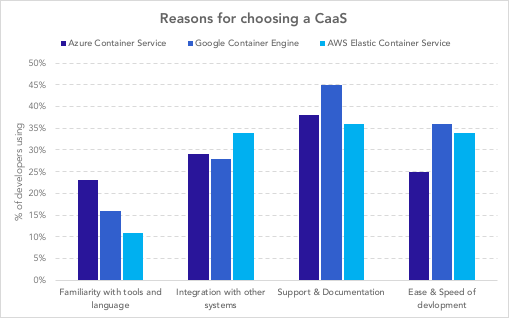 Not all CaaS platforms are selected for the same reasons, though. Developers that chose AWS Elastic Container Service were more likely to choose it because of its integration with other systems. This is a reason to choose AWS ECS for 34% of developers using it, compared to 29% and 28% for Azure and Google. Amazon not only has a vast array of tools and services; they also have a robust partner network. The options are so great they have their own service marketplace and have even released a Cloud Map service to help developers discover and manage it all.

Developers tend to favor Google Container Engine (GCE) because it is easy-to-use and well documented. Forty-five percent of GCE developers chose it in part because of the support and documentation and 36% because of ease and speed of development. We tend to find that developers are consistently happy with the support and documentation that Google provides to their developer community. This satisfaction is an important reason for Google Container Engine users to choose the platform.

Most developers are looking for a platform that is easy to use and fits with their current strategy and infrastructure, whether it is though integrations, support, or the ability to use the tools that they are comfortable with.

While each solution has unique benefits, our analysis also found that many developers were using more than one leading CaaS and in some cases three. Seven percent of developers using a CaaS were using all three of the leading platforms while 46% were using two. 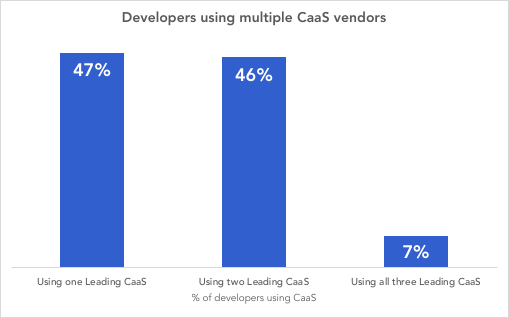 Our data verifies what you may already suspect based on your own experiences: more than half of backend developers are pursuing a multi-cloud strategy, choosing not to commit to a single provider.

There are a number of benefits to a multi-cloud solution that are driving this trend. IT organizations can avoid vendor lock-in if teams develop for a multi-cloud environment. This approach forces developers to build without relying on vendor-specific services, reducing switching costs. Multi-cloud approaches also enable organizations to optimize their infrastructure. Developers and operations pros can leverage the strengths of each cloud depending on the requirements of various workloads and applications. Greater resilience is also a key benefit to consider. This is especially important in denial of service attacks where compute resources can be overwhelmed with fake requests. With a backup cloud ready and waiting, workloads can just shift to the backup cloud.

The choice of either one CaaS or the other will become even less relevant in the future as leading vendors are all standardizing on Kubernetes. Amazon and Azure are promoting Kubenetes-specific CaaS offerings to focus more on Kubernetes as the underlying orchestration engine. Azure is actually migrating all its users to the Kubernetes service. With Kubernetes, the standard orchestration engine, migrating apps, and container across cloud providers becomes much easier.

We are also seeing Amazon and Azure working to make it more convenient to develop using containers and Kubernetes. Both firms are offering clusterless or serverless Kubernetes services such as Fargate from AWS and Azure Container Instance. These solutions enable developers to just deploy containers without having to worry about servers or clusters. This approach will make it easier for developers but the additional level of abstraction also reduces flexibility and increases switching costs.

Amazon's open-sourcing of Firecracker, the micro VM that supports the serverless platform Lambda and Fargate, will be another interesting development to watch. This may prove to be Amazon's response to Kubernetes but for the serverless market. While still a ways off this could lead to a serverless ecosystem that is just as flexible as the container landscape.

Do you feel strongly about the container solution you are using?

Or perhaps you feel poorly about certain other containers?

Let us know about it and have your voice heard by taking the Developer Economics survey.

Published at DZone with permission of Peter Crocker. See the original article here.