In past articles, I have pointed out scenarios that make me wonder:

This time, I want to focus on items that have seemed to slip past the QA team's review.

When working on-site at a client location, often there is a guest wireless network for systems that do not belong to the client. This is a wonderful benefit to allow devices to remain connected without having to use up an expensive cellular data plan.

Unfortunately, the pages that one has to navigate through often do not seem to get much attention from either the UI/UX team or the QA team:

Notice the use of an Accept button instead of the a text box which allows me to type "I agree," as noted in the Agreement paragraph. Then, the Reject button is a couple lines down - perhaps out of view unless one happens to scroll to the bottom of the screen.

The crazy thing is that I had multiple clients with the same issue on their version of this feature — which is why I felt okay with using this screenshot.

I Am Not Sure What Option to Pick

While developers often employ a negative-driven approach for logic processing, this does not always carry over to a pleasant UI/UX experience.

In the example below, which I have rewritten to protect the client, the question being posed resembles a double negative: 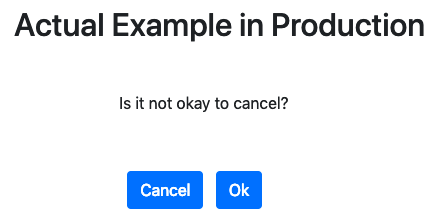 In addition to the question being somewhat difficult to understand, I wasn't really certain if I should click the Cancel or OK button.

One practice is to always place the expected button (default behavior) on the left-most side and/or use a CSS style to indicate so. Neither options were in place for the project where this modal was originally seen.

Continuing on with the last section, the next example I encountered provided the user with a list of checkboxes. This seems like a common approach.

However, in this case, the user was being asked to unselect the items they want to not keep. Again, I changed the example to reflect some fictional life insurance company — since I found this while working on a project in another industry: 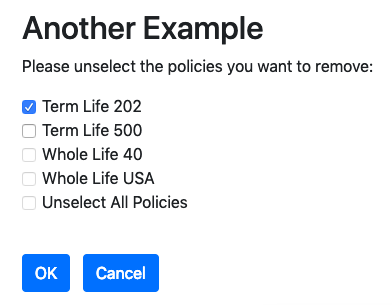 What I thought was even more interesting was the final option, that unselected all items, but was actually selected.

I wonder how many times this example has led to unexpected results?

The three examples above point out how, even with a QA team on a project, that things can slip by that do not lead to an effective user experience. While I understand that not every project has the budget for UI/UX assistance, these examples point out challenges that are easy to find/resolve by developers and QA team members:

As a consultant, I reflect back on the periods in my career where I have been in a production support role. With this view at the top of my mind, I always try to deliver features and functionality that I would prefer to support. This perspective often leads me into a direction where examples, like those noted above, do not make it to the QA team for review.