Mitigating the Spread of Misinformation With the Power of AI, ML, and Deep Learning

Mark Twain, in the 19th century, made the following utterance:

In our information age, driven by the Internet and other so-called “reliable” sources of media, there is an undeniable truth in every word of this quote. And to such an extent that the quote itself is questionable! That whether it was really Mr. Mark Twain or some fanatic seeking solace by propagating it in his name? Spreading misinformation is as old as humanity itself. The Internet, however, has fueled to break all the barriers of its outreach and delay, making Mark Twain’s another supposed quote very true:

“A lie can travel half way around the world while the truth is putting on its shoes.”

The Inadequacy of Human Fact-Checkers

Misinformation spreads quickly and spreads on a huge scale. The number of smartphone users is on an exponential rise. Coupled with this is the fact that any population is liable to be diversified. For instance, in India, there are 22 official languages, and the list of other languages is even larger. No matter how hard the human fact-checkers try to flag and address misinformation, the truth is that there are numerous false stories and comparatively very few people to curb its spreading.

An article by Washington Post stated that in the world’s largest democracy, India, elections are being fought and won on WhatsApp.

The creators of misinformation do it smartly and carefully, denying a computer system to identify it. Substantiating false news thus requires on-ground reporting, and inadequate human efforts leave a wide gap between spreading of the misinformation and human fact-finding. 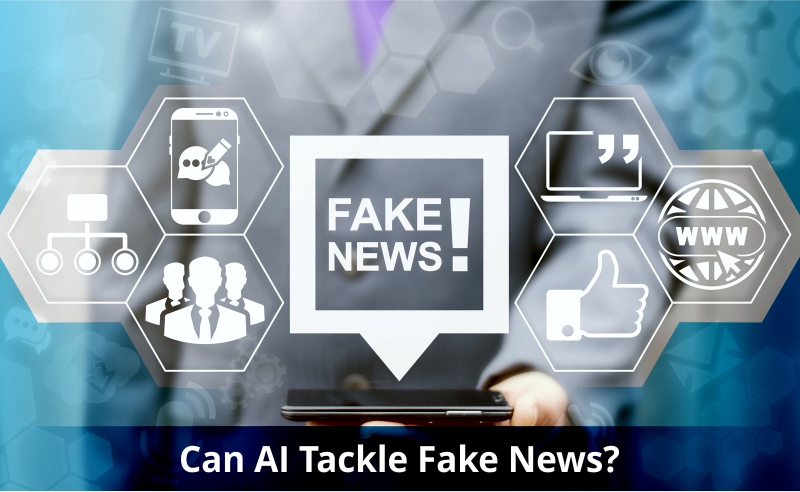 Machine Learning and AI Can Fill This Gap

Unaltered Data is always true; the inference drawn from it may be misrepresented.

Data is the raw material that measures and quantifies information. Rather than relying on opinions and instincts, it is better to act upon absolute, objective facts based on the findings from the data. In the age of Big Data, however, human fact-checking is not at all realistic.

“According to Forbes, in a minute, 98,000 tweets are shared on Twitter, about 600 videos are uploaded on YouTube, and about 1500 blogs posted on several blogging platforms, all over the world.”

Only machines have the potential to handle this huge amount of data.

Misinformation spreads like the forest fire, so to deal with fake news, neither human-checking nor traditional technologies are potent enough. One of the 5 Vs of Big Data — data veracity — is in question here, which calls for more sophisticated approaches like AI, Machine Learning, and Deep Learning. These emerging technologies can make out if the data or statistics to back an argument is legitimate or illegitimate. Information needs to be grasped more objectively, and emerging technologies enable us to become more data-driven in decision-making.

Deep Learning and Natural Language Processing, disciplines of AI and Machine Learning, have the capability to identify patterns in the data. From these patterns, spam, malware, and misinformation can be eliminated. Moreover, Machine Learning and AI-based tools leverage online knowledge repositories that enable sifting fact from fiction, thus highlighting the potentially false ones. Even manipulated images and videos are not elusive from the scanner of Machine Learning and AI tools.

“According to a Mumbai-based fact-checking organization, Facebook has made a dashboard where one can view particular information flagged as misinformation by users. The information then is fact-checked to ascertain its credibility.”

Technology giants like Facebook, Google, and other media companies are waging their own wars against this epidemic of fake news and misinformation. Needless to say, Machine Learning, AI, and Deep Learning are their Poseidon’s Trident in this battle.

AI in a Race Against Itself

AI and Machine Learning techniques are employed in creating an algorithmically designed News Feed that incites emotional responses from users. We are, thus, living in a world where one machine creates fake and damaging content, while the other detects and eliminates it.

“Gartner has recently predicted that by 2022, major portion of the economically developed population will perceive more false than true information.”

This study has grave implications for mankind because even before we reach that phase, we will have fake content in such high proportions that even upright machines may succumb to this sophisticated falsity. AI, along with the disciplines under its umbrella, is, therefore, in a race against itself where evil is being chased by the good. But unfortunately, both the riders are mounting the same breed of broncos—Artificial Intelligence.

Human Intelligence Is Greater Than AI

History has witnessed the golden ages of humanity where AI may or may not have existed, but human intelligence definitely did, and as a matter of fact, it has significantly led to the development of some of the greatest and the most prosperous empires that time has seen and the world has known. No matter how much science and technology progresses, AI will always remain subordinate to human intelligence.

AI is just a means of mitigating the spread of misinformation. Ultimately, it boils down to the human understanding. People must realize the fact that the most effective way to get someone’s attention is to strike the emotional chord. If a story, article, or post enrages you, it is better to investigate first before sharing it immediately. Technology can help humanity in limited ways. When human intelligence is enhanced with artificial intelligence, we would possibly be able to curb the spread of misinformation effectively.

Online propagandizing can have devastating outcomes. And the most unfortunate fact is that fake news spreads more quickly and widely and is more engaging or appealing to the viewers. This is because in the online world, content choices are saturated and the users have a limited attention span. Spreading misinformation, thus, has become so prolific that it is now nearly impossible for humanity to dig itself out of the quagmire. The last resort is to devise machines to pull us out.

AI has the capability to separate the good from the bad through pattern recognition that facilitates learning behaviors from the past events. Algorithms are devised around these patterns that help in weeding out the false from the truth. However, there are people with malicious intent who can leverage AI to create fake news as well. Thus, when it comes to spreading misinformation or curbing its spread, AI can be utilized for both the good and the evil. Human intelligence coupled with AI is the best answer to curb the spread of misinformation. Remember and apply these two maxims when dealing with online content:

As we have seen, Machine Learning, AI, and Deep Learning can prove to be the best technologies to eliminate the spread of misinformation, but this attempt can be pragmatically carried out only when we have skilled professionals with ML and AI expertise in abundance. Technology advancement can help us scramble up to the surface from the mire of ignorance and create a prosperous world where there is no place for malignancy of any kind, including the propagation of misinformation.