mondrian has been talked about a lot over the years. guido van rossum, who lead the development talked in 2006 about it, and the fun he had making it:

guido was a googler then, but now he works for dropbox. a thoroughly nice guy.

this could be out of date as i only have context up to the end of 2008, but for the most part they only review commits that happen on the trunk. apart from android, google does trunk based development (tbd) everywhere. they made the review process as lean as they could, by making reviews ordinary and continuous. in google’s view, perforce’s change-lists (cls) either have or have not been reviewed. mondrian keeps track of those. releases, as such, don’t have a late cycle of reviews. indeed it feels that ‘review’ is not an entity within mondrian, but instead another artifact of a commit (a cl). as it is not an entity in itself, there is a 1:1 mapping of reviews to cls. i’m laboring it now, but change-lists are the only important noun going on here.

thus to google “continuous review” is merely the speedy picking up of unreviewed pending commits. by ‘pending’, i mean that the commits have not hit the trunk yet. indeed until they ‘pass’ review, they are not going to. perforce’s pending commits can have a unique number, and be extracted from the developer’s workstation even before they are allowed to be committed to the trunk for posterity (after successful review). guido had to do a lot of tooling to make that smooth though.

these are all installable. there are portals like github that have an built-in review mechanism, that i’m not going to go into.

enterprises other than google

most enterprises are not going to setup pre-commit reviews, but instead to a boy-scout-pledge to not break the build and review after the commit. with review as an entity, it’s not uncommon to group multiple commits into one code review. with review as a larger entity, you might have a formal workflow around it, and indeed have a formal assignment and management aspect to the review.

atlassian’s crucible is an installable tool that works like that – assignable reviews that can happen any time and are usually an aggregation of commits. crucible (which i’m going to concentrate on for the remainder of this article) can review commits on any number of branches and attempts to make sense of the ancestry.

bigger enterprises with more separate projects going on, are going to do there reviews late (if at all). industry regulators as well as internal wishes to be more professional can drive code-reviews.

we’re going to dive into a worked examples here, for crucible specifically, as it’s the gorilla in the room.

install your own crucible (a 30 day demo is downloadable), and launch it.

make a subversion repo with this script (create_repo.sh):

use that like so, before starting the svn server:

run this shell script (svn_test.sh) to populate the directory:

then go into the web interface and take a look at the “commit graph” for the repo: 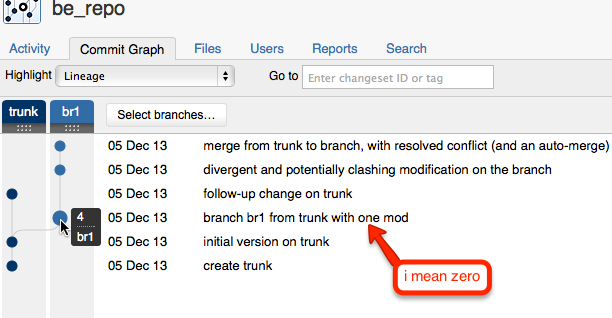 the commit i’ve highlighted (#4) created the branch. note yesterdays article raised a subversion defect – the test case i’m using made the branch ‘unchanged’ from the trunk, yet subversion registers a commit, and that commit is noisy compared to what is should be:

this lines didn’t change! crucible fixes that for you though, with some clever double-checking: 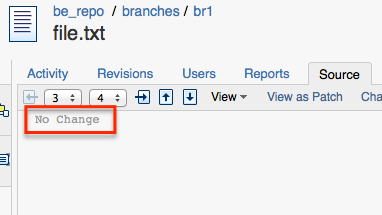 without that crucible fix for (or masking of) the subversion bug, you might end up reviewing everything that happened on trunk all over again, even if you reviewed it before.

there another snafu in subversion in that the merge from revision 5 on trunk, isn’t shown into revision 7 on branch br1. i’ve added a red arrow to show what that should look like:

atlassian note some limitations in an article viewing the commit graph for a repository (search for ‘subversion’ in the page). they could, i suspect, eliminate that bug.

the clashing merge (and ultimate commit) – #7

line 3 – versus the common ancestor which had ‘clicks-and-mortar’, the trunk (before the merge) was changed to ‘empirical’ in change #5. the branch had no change versus the common ancestor. this merge shows the ‘empirical’ change as a change in #7, which technically it is (was not previously on the branch br1), but it might have been reviewed before as part of a review for #5.

it’d be great if crucible could show that it was in a previous commit and even reviewed with a different color.

one change not apparent

it’d previously happened on the branch, but ‘immediate’ (line 2) had changed to ‘any’. it’s correct that it is not shown.

make a new git repo inside crucible (remember the repo_name).

populate the test commits in the repo:

now go to the commit graph for that:

let’s look at the merge commit:

arghh, it’s a nightmare, it’s not showing me the diff on the branch. the previous commit on the branch looks like this:

same as subversion. i didn’t make a script, although it would have been only 15% longer than the subversion one due to increased command-line setup complexity. caveats: the initial branch population in crucible – clicking on the diff does nothing (can’t see anything). atlassian note there are limitations in perforce too .

no pics, as i’m all picced out for now.

with crucible and any of subversion/git/perforce there were scenarios that would lead to changes being reviewed twice. really though it’s going to be a very small percentage of cases, and you shouldn’t worry about it. i have not explored, but it could be that there are things that don’t get reviewed at all, in a multi-branch code-review design.

i can’t help but feel that google’s linear and “continuous review” is simply the most efficient way to do reviews. sure we can’t do roll-up reviews (not otherwise covered in this article) by methodically reviewing every commit soon after they happen, but i’m not sure i’d want to if i’m losing all the context that comes with the commit messages.

actually, i’m sure a trunk based development workflow (regardless of your local-branching model), with reviews of the commits on the trunk only and asap is best. “continuous review” isn’t my coin by the way, but i like it.