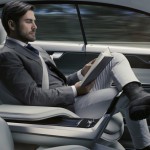 the transition towards an autonomous future is something of an uncertain one, especially if driverless cars share the roads with humans. for instance, last year, volvo executives suggested that the safe nature of driverless vehicles may encourage human drivers to be reckless, safe in the knowledge that the driverless car will always cede to them to avoid an accident.

a recent study from uc santa cruz came to a similar conclusion with regards to pedestrians. it utilizes game theory to test the interactions between driverless cars and pedestrians.

so a recent paper , published in human factors , makes for interesting reading, as it examines the path we might embark upon between now and a fully driverless world. the paper urges all stakeholders in this issue to consider the cognitive constraints of the driver in the likely event that humans will still need to oversee and intervene the actions of the driverless vehicles.

the authors contend that this is not an issue confined to driverless technology, but indeed many other spheres where automation is gaining ground, whether in cyber security or health monitoring.

the paper provides a thorough analysis of four decades worth of research on the human-automation interaction, with the result being a new model, called the human-autonomy system oversight (haso), which identifies key cognitive processes and interface features that need to be taken into account when building autonomous systems.

the authors suggest that rather than simply sitting back and enjoying the ride, human passengers will need to remain observant of the current situation so that they can step in if required. it might be easy, for instance, to become complacent and zone out, especially after prolonged spells of doing nothing.

“the more automation is added to a system, and the more reliable and robust that automation is, the less likely it is that human operators overseeing the automation will be aware of critical information and able to take over manual control when needed,” the authors say.

the paper makes a number of suggestions to improve matters, and believes that autonomous systems should be:

the paper provides some detailed guidance that designers can use when building the interfaces for autonomous systems to ensure people are more effectively kept in the loop and can thus re-engage with it when required. the hope is to help make the transition a smoother one.

“as long as human oversight of autonomous systems and intervention is required to achieve successful performance, the automation conundrum will undermine performance and safety in many applications,” the author concludes.

the study is interesting because it joins a growing volume of work examining the interface between man and machine.

a recent stanford study takes another angle and examines how we might transition between the car driving and us driving. how might such a scenario be made as smooth as possible? the study placed a number of test drivers on a track to find out, and the results suggest the transition isn’t as smooth as we might think.

“many people have been doing research on paying attention and situation awareness. that’s very important,” the authors say. “but, in addition, there is this physical change and we need to acknowledge that people’s performance might not be at its peak if they haven’t actively been participating in the driving.”

now, it should be said that the differences in human performance weren’t unsafe or anything, it wasn’t like they were missing red lights or anything of that nature, but as the researchers measured performance, there was a noticeable drop during that transition period as the driver got back into the flow of things again. the authors believe this could be a time of high risk of accidents.

a driverless world promises a fascinating range of benefits, but there are nonetheless some issues to be ironed out before we get there. it’s good, therefore, that a number of studies are emerging to help us tackle that transition.