Since a few months, I've been refactoring my old C++/OpenGL project. Thus far, I used compilers (MSVC and Clang), my knowledge or free tools. At some point, I also got a chance to leverage a solid static analysis tool - PVS-Studio. The tool helped me with identifying 8 critical issues not to mention good code style and performance enhancements (in total 137 warnings)

Read on to see my report.

The article appeared initially at bfilipek.com

This post is sponsored by PVS-Studio but all opinions, code and the article idea come from me.

I'm working on a project which is a visualization of various sorting algorithms, written in Win32Api, C++, OpenGL. I always put a nice GIF that presents how it works:

You can read my previous articles that describe the project in detail here.

Running the analyzer is very simple. Inside Visual Studio 2019 you have to select:

This action starts the PVS process which can last a dozen of seconds (for small projects) or a couple of minutes... or longer - depending on your project size.

After the check completes, you can see the following window with all of the messages: 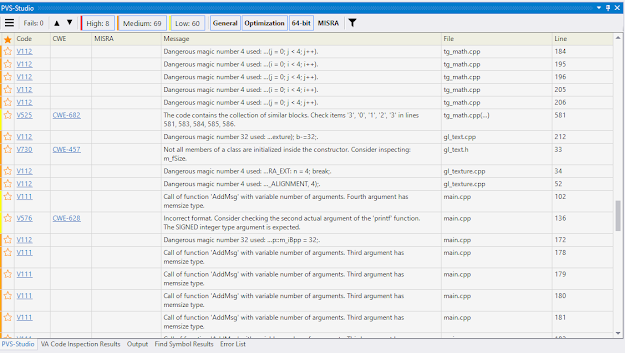 This shows all issues that the tool has found for the solution (You can also check a single project or a single compilation unit).

As you can see, the numbers are not large, because my project is relatively small (5kloc), yet it helped me with improving the code in several places.

What I like about PVS-Studio is its super handy UI: it's just a single window with lots of easy to use shortcuts (for example filtering between severity level). It's easy to filter through files or even skip some errors entirely.

For example, here's a screenshot where I could easily disable warnings found inside gtest.h which is a part of Google testing framework:

I won't be able to fix those issues, as it's third-party code), so it's best to make them silent.

Depending on your project size, you'll probably need some time to adjust the output to your needs. After those adjustments, you'll be able to focus on the major problems and limit the number of false positives or non-essential issues.

Here's some more documentation if you want to start with your project.

What's more, you can also try PVS-Studio for free through Compiler Explorer! Have a look at this website how to start: Online Examples (C, C++).

Ok, but let's see what the tool reported for my project.

In total the analyser found 137 warnings and 8 criticals. We won't cover them all, but for the purpose of this text, I grouped them and focused on the essential aspects.

Do you see the error?

Maybe it's quite easy when there's only one function listed in the code sample, but it's very easy to skip something when you have a bunch of similar functions:

Copy-paste bugs or simple omissions can happen quite quickly... at least in my case :)

I guess it would be tough to spot this error, not easily at runtime.

Or another crazy and harmful bug:

For matrix multiplication... do you see the issue?

V756 The 'j' counter is not used inside a nested loop. Consider inspecting usage of 'i' counter. tg_math.cpp 157

Apparently, my code didn't use that much of matrix transformations as I didn't notice any issues at runtime, but it would be tricky to pinpoint the problem here.

The tool could detect even the following, however harmless issue (possibly as a result of copy paste):

V592 The expression was enclosed by parentheses twice: ((expression)). One pair of parentheses is unnecessary, or misprint is present. tg_math.h 596

Let's see some other issues:

This is a simple function that draws a cylinder with optional top and bottom sides.

V581 The conditional expressions of the ‘if’ statements situated alongside each other are identical. Check lines: 286, 305. gl_shapes.cpp 305
V751 Parameter ‘bottom’ is not used inside function body. gl_shapes.cpp 246

I haven't seen this issue as a bug, because in the project, I always pass true for the top and the bottom parameters. But it's clear that there could be a different case and my code would draw both sides wrongly.

Note: this bug could also be suggested by C4100 - MSVC warning enabled for Warning Level 4.

PVS-Studio makes it more evident that there's something wrong with the similar code sections and that way it's easier to have a look and recall what the real intention of the code was.

A quite common bug with enums:

V719 The switch statement does not cover all values of the 'CameraMode' enum: cmUVN. gl_camera.cpp 50

Such bugs can often arise when you extend the enum with new values, and you forget to update switch places where the enum is tested.

Another critical bug that might cost you a lot of head-scratching:

Fortunately, since C++11 we should use in-class member initialisation (see my separate blog post on that), but those bugs might be relatively often for legacy code.

The analyzer can also help to address performance issues. For example:

Issues with numbers and conversions might be tricky to address, but PVS-Studio can show you many things that might be important to fix. For example:

Or the following report:

For the place when I compare floating-point values using == rather than fabs or some other functions that have some "epsilon".

And even worse scenarios:

The above code generates:

The code worked in my case, and this was used to draw some tiles on the floor... but it's not the best approach and definitely not scalable.

While I wrote my project just for fun and without any "critical safety" in mind, it's also noteworthy that PVS-Studio supports strict industry standards and guidelines that can strengthen your code.

To make it short, you can enable MISRA Coding standard checks and see how it works against your project. In my caste I got...

From what I see from the output it's mostly about using unions (they are not safe in most of the cases). Some other bugs were related to literal suffix V2517. MISRA. Literal suffixes should not contain lowercase characters. And errors like:

A lot of them were duplicates, so I need some time to sort them out.

Anyway if you like to read more about MISRA here's a good starting point: What Is MISRA and how to Cook It

Having a reliable static analysis tool helped me to identify a bunch of issues in my small project. I'm especially impressed with finding copy&paste kind of bugs which are easy to skip but can hurt a lot at runtime.

Here's a wrap up of the strong points for the PVS-Studio:

Some things to improve:

The natural way to try the analyzer on your code is to get the trial version. With the hashtag #bfilipek in the request form, the license key will be generated not for a week, but for a month.

More From the Author

Bartek recently published a book - "C++17 In Detail"- learn the new C++ Standard in an efficient and practical way. The book contains more than 360 pages filled with C++17 content!