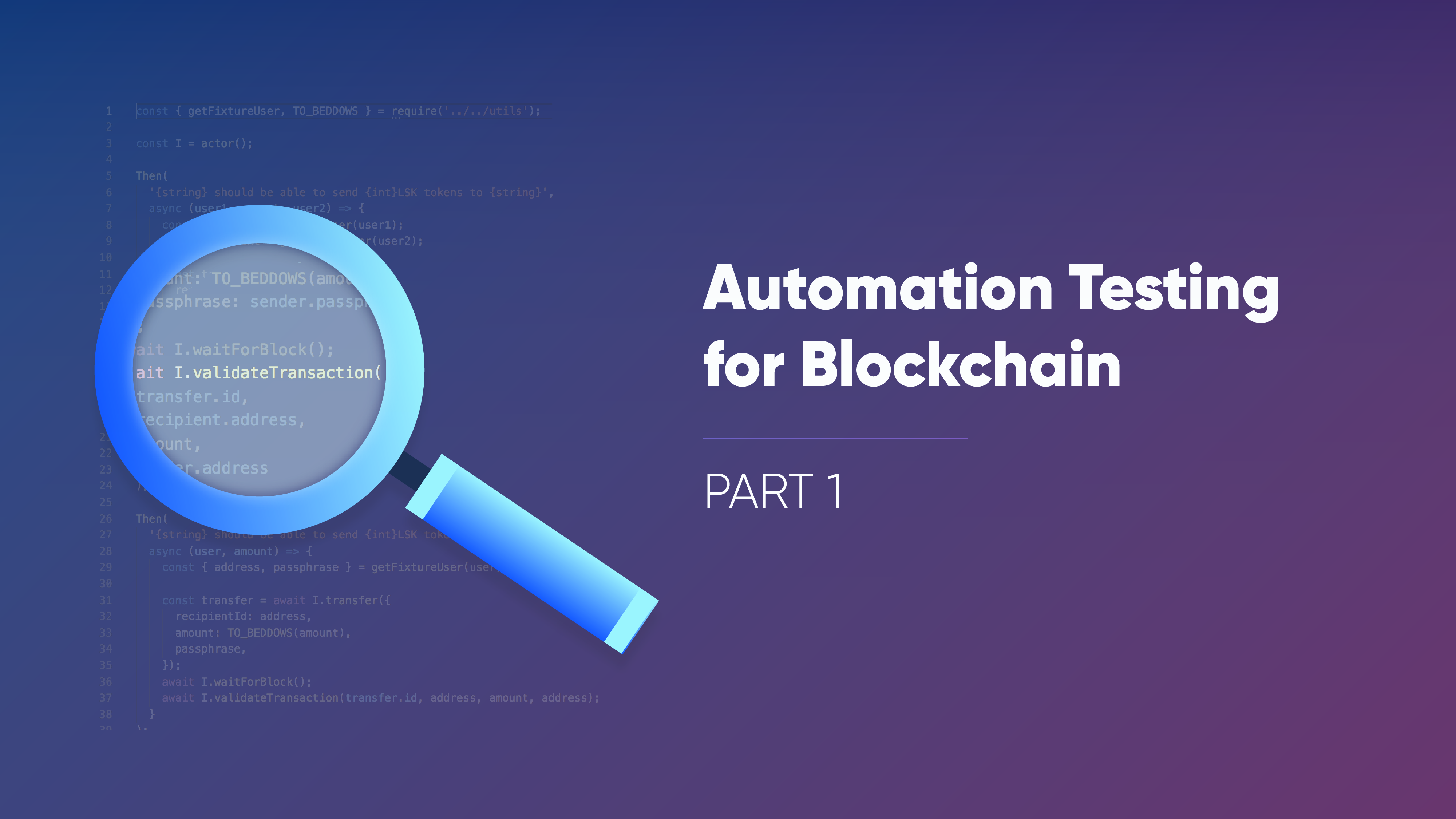 Today we will discuss the importance of software testing in blockchain, outline benefits of automation testing and explain how to get involved in the Quality Assurance of our open source project. This is part one of the two-part blog post.

Many blockchain projects don't survive long after hitting the initial production state. For most, the lack of proper software testing is one of the main reasons for their demise. It's estimated that over half a billion dollars worth of cryptocurrency has been lost due to bad code in the last year alone. You probably heard about The DAO's code loophole, which allowed attackers to drain out 3.6 million ETH (worth $70 million at the time) from the Ethereum-based smart contract. Another notorious case was the Parity bug which resulted in over $150 million permanently frozen. Even Bitcoin itself is not immune to hacks. Late last year, a bug discovered in the code allowed malicious individuals to artificially inflate Bitcoin's supply via double input. If the bug wasn't quickly identified and addressed, it could have had catastrophic effects on the network. This is just the tip of the iceberg — there are plenty of smaller incidents caused by inexperienced or inattentive developers that don't make the headlines.

You've probably heard about blockchain in the context of cryptocurrencies like Bitcoin, but what makes this new technology so special? The blockchain, which is a type of distributed ledger technology (DLT), is an open, distributed database that is able to record transactions among parties permanently and in an efficient, verifiable way. Those transactions are packed into blocks, cryptographically-signed and form the actual chain. Data stored in blockchain can't be altered or tampered with, as all the records are immutable. Once data is saved into the ledger, it stays there forever. The blockchain is also a decentralized network, meaning there is no central authority with control over it.

It's easy to get excited about blockchain, but very difficult to actually develop a working product on top of it. Blockchain developers still seem to be a rare breed of programmers for various reasons, including the steep learning curve required. Lisk plans to tackle these problems head-on by making it easy for every developer to build and deploy blockchain applications in JavaScript. Lightcurve is a blockchain product development studio and consultancy based in Berlin, Germany. We're currently focused on developing all aspects of Lisk, including the product, marketing, community, and design.

What is Software Testing?

Basically, software testing is defined as a set of activities that can be done to guarantee that software is behaving as expected and it's bug-free. A proper software testing process will help you to identify and prevent mistakes, ensure that the actual implementation of particular features matches the requirements and increase overall confidence in the code.

Testing blockchain applications is not much different from testing non-blockchain ones. However, with blockchain, additional test metrics are involved, for example:

Why Blockchain Developers Need to Pay Much More Attention to Details

If a bug was introduced in a centralized system, providing a fix would be relatively straightforward. Even if it corrupted some data, it would be easier to correct. This is because in most cases, the company maintaining the application has complete control over the data. Given that blockchains are immutable ledgers, corrupted data is incredibly hard if not impossible to correct. Complicating the process even further, delivering a fix needs to be coordinated with all participants of the decentralized network. With Lisk, we must coordinate every release with hundreds of node operators, as well as block producers called delegates in our DPoS consensus algorithm. Taking all these scenarios into account, the consequences of bugs in blockchain applications can be much more dangerous than in centralized software.

In development, things can go wrong fast and the outcome can be ugly.

Automation Testing Can Significantly Cut Down the Release Process

Now that we have discussed the importance of testing in a blockchain project, we can divide the actual tests according to the way we execute them:

We can distinguish a few types of automated tests, such as unit tests, integration tests, and functional tests. However, in some of the existing test suites, those types are confused with each other and there is absolutely no distinction between them. This makes a test suite not well-suited for anything in particular. It's very important for a developer to understand different types of tests as each one has a unique role to play.

For complex applications, automation testing can reduce the time required for the release process from months or years to days or even hours.

Continuous Integration (CI) is a software development practice which depends on frequent integration of the code into a shared repository. Every time a team member commits some code changes to version control (for example, Git) the automated process of building and testing the code can be triggered. Developers are encouraged to submit their code together with tests (unit, functional, integration) after the completion of every small task (fixing an issue, implementing a feature). Automated build system fetches the latest version of the code from the shared repository and applies changes if needed. It then executes all scheduled actions against it, like executing tests. CI is considered best practice because software developers need to integrate all the changes done by them with the rest of the changes made by other members of the development team. It helps to avoid merge conflicts, difficult bugs, or duplicated efforts. This is because CI forces the code to be merged into a shared version control branch continuously, allowing them to identify possible problems earlier and more easily. It also minimizes both the time spent on debugging and the time required for code reviews, allowing developers to focus more on adding features.

Which Platform to Pick?: Travis CI vs. CircleCI vs. Jenkins

The few popular CI platforms currently available vary by features and flexibility. Some of them are free. For others, you need to pay.

If you want to compare CI platforms in more detail, there is a very nice comparison available on Stackshare.io.

That’s it for Part 1! Check out Part 2 of the walkthrough on Monday to read about the importance of quality assurance, our experience in implementing automated testing and links to get involved in the QA testing of our blockchain.

Is Your Test Data Waiting on Your DevOps Team?

Published at DZone with permission of Mariusz Serek . See the original article here.