In the last two decades, the advancement of computation technology has produced more powerful processors, storage, memory, and networking devices for low prices. Eventually, many physical things will be embedded with more computation capabilities and interconnected via the Internet in a cost-effective manner. The widespread adoption of IoT technologies enriches the idea of ubiquitous computing that Mark Weiser came up with in 1988 — that is, bringing computation into the physical world and making effective use of computer technologies.

Mark Weiser defined ubiquitous computing as “the method of enhancing computer use by making many computers available throughout the physical environment but making them effectively invisible to the user.” This definition highlights the following main properties:

Altogether, ubiquitous computing improves the performance of human activities by moving technology into the background, which allows users to focus only on their natural activities towards the world. The technology drives users’ tasks in an optimized manner in the background.

There are many research and commercial IoT products available today; for example, smart wearables, homes, cities, factories, etc. A few common factors are apparent in existing IoT technology. A lack of standardization is a commonly seen concern in most of the ecosystem that limits collaboration and interoperability between IoT applications. For example, smart electrical appliances together can build better smart homes. In the same way, smart homes could be made in a standardized way, helping build up to better smart cities.

Another common factor is the engagement of similar architecture patterns. IoT frameworks today follow the idea of virtualizing devices on the cloud and provide a set of services over mobile and web applications. As seen in the following diagram, these applications are not autonomous and interoperable with each other, nor is any collaboration possible. Also, more IoT devices are being released every day. The cloud will not be the best place to virtualize all these IoT devices. 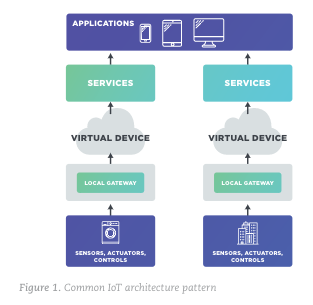 The requirements for the next generation of IoT that enrich the characteristics of ubiquitous computing can be classified as the need for standard middleware and application protocols. The middleware protocol should abstract the underlying network complexity of heterogeneous devices and provide a simplified API for the application protocol to develop autonomous applications that lead users toward a natural way of interacting with the physical environment.

The requirements for a standard middleware and application layer can be summarized as follows: 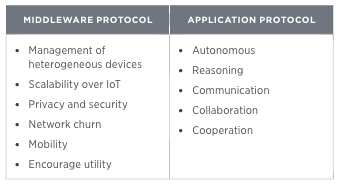 Fortunately, the requirements for a standard middleware protocol are already part of the research field of peer-to-peer computing and have been producing various successful protocols during that time. In the same way, the requirements for a standard application protocol have been already improved and standardized in the field of multi-agent systems.

A peer-to-peer (P2P) system is about the sharing of computer resources in a decentralized manner. In P2P systems, each host directly connects to each other over the network, forming virtuality for resource sharing. P2P systems first became popular in 2000 with Napster, a community-driven file sharing system. BitTorrent and Blockchain are other successful P2P systems today. All these systems address the issues of network complexity, scalability over a broad set of communities, intensive data load, and network churn while encouraging peer resources as the utility.

Michael Wooldridge defines an agent as “a computer system that is situated in some environment, and is capable of autonomous action in this environment in order to meet its delegated objectives.” An agent delegates its objectives toward the environment, and becomes intelligent with the following properties:

A multi-agent system arises when multiple intelligent agents cooperate in a single environment. Like humans, intelligent agents are expected to communicate with each other and reach agreements in achieving their design objectives.Agents can be designed to perceive information from sensors and to decide actions internally to take toward effectors or actuators. With a P2P middleware protocol, the agents are no longer limited to particular sensors or actuators. Figure 2 depicts how an agent’s view can be adapted to modern IoT applications. 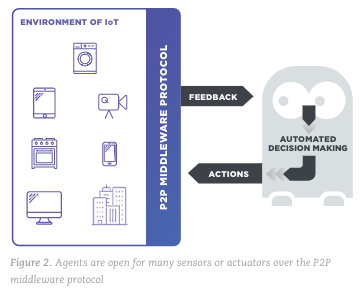 The following figure summarizes all the key aspects discussed previously for having a standard IoT platform. As it presents, the environment will consist of many IoT devices that are supposed to grow rapidly over the next few years. A standard P2P middleware protocol will provide a reliable distributed system model, which is intrinsically scalable over the expected growth of IoT. 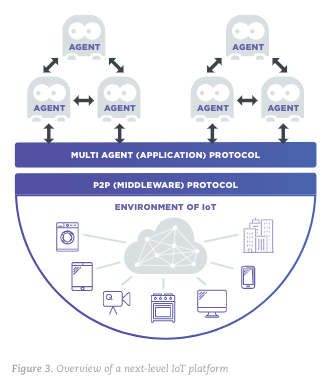 An application protocol based on a multi-agent system will allow for the implementation of autonomous applications capable of communication, cooperation, and negotiation with each other. Unlike general applications, agents are designed with goals to be fulfilled on behalf of their users — that is, agents will take necessary actions efficiently towards its environment over a P2P protocol. With a P2P middleware protocol, there are a lot of possibilities to understand the user’s context accurately. The agents will use all this information to make context-aware actions for users. In this way, we can develop applications (agents) that perceive sensor data from one vendor device and make actions toward actuators from another vendor. The new platform opens many possibilities to produce novel (multi-agent) applications that enrich the idea of ubiquitous computing.