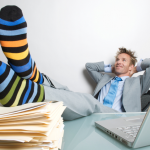 there are generally mixed feelings about loafing off at work.  on one hand you have those who believe that you should be working non-stop for the duration of your work day, and therefore loafing is bad news.

on the other hand, you have those who suggest that a bit of loafing is actually a good thing as it allows you to recharge your batteries, and even be more creative .

the debate takes another turn when we consider the continuing issue with presenteeism, where people are judged as much by the hours they put in as on the work they do.

a recent paper from the national bureau of economic research set out to explore just how productive we are at work, or in other words, how much time we spend not being productive.

the study discovered that the average employee spends about 34 minutes not working each day. on the surface, this doesn’t seem too bad, but the data did include those who claimed never to slack off.

once those folks were discounted, the figure rose to a more realistic tally of 50 minutes. when the figure was delved into, roughly half of this time was spent eating, with another half spent on leisure activities such as talking with colleagues.

it literally seems as though people are so engaged in work that when they put in marathon shifts, they don’t even have time for a breather.

suffice to say, the study suffers from the issues most self-reported data sets suffer from, and as such, it’s likely that we’re not giving a completely accurate picture of how we spend our time.

after all, the very language used in the study highlights the issue society still has with having a brain break at work, with the perception that it’s slacking off, so it’s probably unlikely that someone would admit to doing too much of it.

given that it’s extremely unlikely that someone can concentrate on complex mental tasks for 8 hours non-stop, a degree of 'slacking' should be considered essential if the workforce is to remain productive.

studies have suggested, for instance, that over a typical working day, we need around 2 hours of 'down time' in order to remain productive for the remaining time.

as managers, i feel we’re duty bound to move our workforces away from the notion that workers exist to 'work' for x number of hours rather than to produce x number of outputs.

maybe that would be a good start in moving the debate away from perceived slacking.