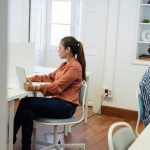 one of the main selling points of open plan offices is that they are good for collaboration. their ability to support ease of communication among employees is supposed to encourage teams to work effectively together. this is then supposed to offset their damage to individual work that requires high levels of concentration.

except the evidence is mounting that they aren't even that good for supporting collaboration. earlier this year a study from karlstad university, sweden found that open-plan office spaces not only harm collaboration, but also reduce employee happiness.

"the results show a negative relationship between the number of co-workers sharing an office and employees' job satisfaction. this association was mediated by ease of interaction with co-workers and subjective well-being, with employees working in small and medium-sized open-plan offices reporting lower levels of both these aspects than employees who work either alone in cellular offices or together with up to two colleagues in shared-room offices," the author explains.

this has been followed by a second study from a couple of harvard researchers, which was recently published in philosophical transactions of the royal society b. the study tracked employees at a fortune 500 company that was about to redesign an entire floor of their global headquarters. the plan was to remove individual cubicles and move to an open-plan workspace.

each participant was asked to wear a sociometric badge and microphone for three weeks prior to the redesign to gage a baseline of their behavior under existing conditions. they then wore the same equipment for three weeks a few months after the refit had taken place to see if any noticeable changes had emerged.

not only did the data from the wearable devices allow the researchers to monitor face-to-face interactions, but they could also call upon server data from the company to identify whether email and instant messenger patterns had changed.

the results revealed a significant impact, with participants spending 73% less time in face-to-face interactions after their move to an open-plan office. by contrast, their digital usage rocketed, with email and instant messenger usage rising by 67% and 75% respectively.

this was then followed by a second experiment that aimed to understand the nature of these interactions. in essence, the researchers wanted to see if specific collaborations had been disrupted after the move. worryingly, of the 1,830 interactions they monitored, 643 reduced face-to-face time after the shift to open-plan working, with just 141 showing an increase.

a shift to virtual

overall, therefore, the new open-plan workspace seemed to significantly reduce the amount of face-to-face interaction across the workforce, despite the design existing to do the very opposite. the researchers suggest that the nature of the new space could be the reason for this, as people strive to shut out their colleagues by donning headphones. alternatively, you might not wish to have certain conversations out in the open and resort to email instead.

so how influential should this research be? well, it was obviously conducted in just a single workspace, so concessions have to be made for that, although the real world nature of the research certainly counts in its favor.

there is also the assumption that face-to-face collaboration is innately better than virtual collaboration, which might not always be the case. even with that concession, however, the fact that open-plan workspaces seem to do the exact opposite of what they're designed to do should surely prompt all workplace professionals to reassess their thinking, or at least accept that branding a cost-cutting exercise as one that's good for employees is no longer viable.