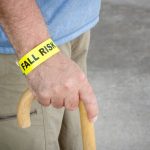 falls are a big deal for the elderly, with millions of those over 65 taking a tumble each year, leading to head injuries, broken bones and sometimes worse.

i wrote earlier this year about an innovative project from the university of manchester to use games to help elderly people avoid falls.

the games have been developed by a team from the university of manchester in partnership with trafford hospitals and mira rehab limited.

participants played on the exergame three times a week in their independent living accommodation, and the results suggest that they received a boost to both their balance and confidence as a result.

of course, that isn’t the only technology aiming to make a difference in this area. a team from the university of missouri have developed sensors capable of measuring the gait and stride length of people, and therefore predict the likelihood of falls.

“we have developed a non-wearable sensor system that can measure walking patterns in the home, including gait speed and stride length,” the team says. “assessment of these functions through the use of sensor technology is improving coordinated health care for older adults”

the sensor network was installed in a state-of-the-art retirement home called tigerplace, and generates an array of images and alerts to notify nurses when irregular motions were detected. the aim is for the staff to then intervene and prevent falls from happening.

the sensors generated a huge amount of data about the mobility of each patient, and it emerged that a 5cm decline in gait speed per second could be connected with an 86.3% chance of a fall within the next three weeks. what’s more, a shortened stride length was also linked with a high chance of falling in the near future.

such projects are a key part of encouraging the elderly to live healthy and independent lives. i wrote earlier this year , for instance, about a project from researchers at ut arlington where a smart home was developed with a range of features to help their elderly residents retain independence.

the homes come complete with a number of interesting technologies:

it would be easy to imagine the sensor network developed by the missouri team fitting in with these technologies and provide an added level of support and security.

the missouri team reveal that such technologically supportive environments allow residents to retain their independence for around twice as long as is typically the case, thus suggesting a real benefit to both society and the residents themselves.

they will next explore how health staff can use the data generated by the sensors to better intervene and prevent falls from occurring.