The COVID-19 pandemic really changed the way we live. No matter where you are, you're being impacted by this unpredictable virus. We do not know what the future holds, but we do believe in science and in better days to come.

One thing that makes me as a data analyst particularly happy is that we have publicly available data. We can analyze that data and learn something from it. If you want to explore COVID-19 with the help of modern SQL constructions, keep reading — this article is intended for you.

Today's news is filled with COVID-19 information. No matter which site you visit, the coronavirus topic is inevitable. This is not surprising; our situation is totally extraordinary and we all hope to return to normal someday. Until that "normal" appears, the coronavirus will stay a central topic of interest.

For data analysts, the good news is that coronavirus-related time series data is publicly available and updated daily. We can download the data sets and draw our own conclusions from analyzing them. There are a lot of different tools and technologies available to make such an analysis. In this article, I will show how you can analyze the data with the help of advanced SQL techniques. We are going to use data published by Johns Hopkins University on their GitHub page.

Before we start a short analysis, let's look at the data in the database.

We'll use the confirmed_covid table in this article. It contains the total number of confirmed coronavirus cases per day for each country and province/state. The first date in the table is 22 January 2020. The data comes from Johns Hopkins University's official GitHub page, which is refreshed daily. The data has been transformed with R code and loaded into this MySQL table. The R code is available on my GitHub page.

Here is how the data looks for Croatia (one of the affected countries) during March 2020:

There are four columns — country, province_state, date, and confirmed_day. The confirmed_day column stores the number of patients that tested positive for COVID-19 on a specific day (the column date). For example, on 29 March, Croatia had 56 new confirmed cases. On 30 March, it had 77 new cases. Note that the province_state column is blank for Croatia, as Croatia is reporting on a country level. This is not the case for China, Canada, or similar countries; for these, the province_state value will be defined. 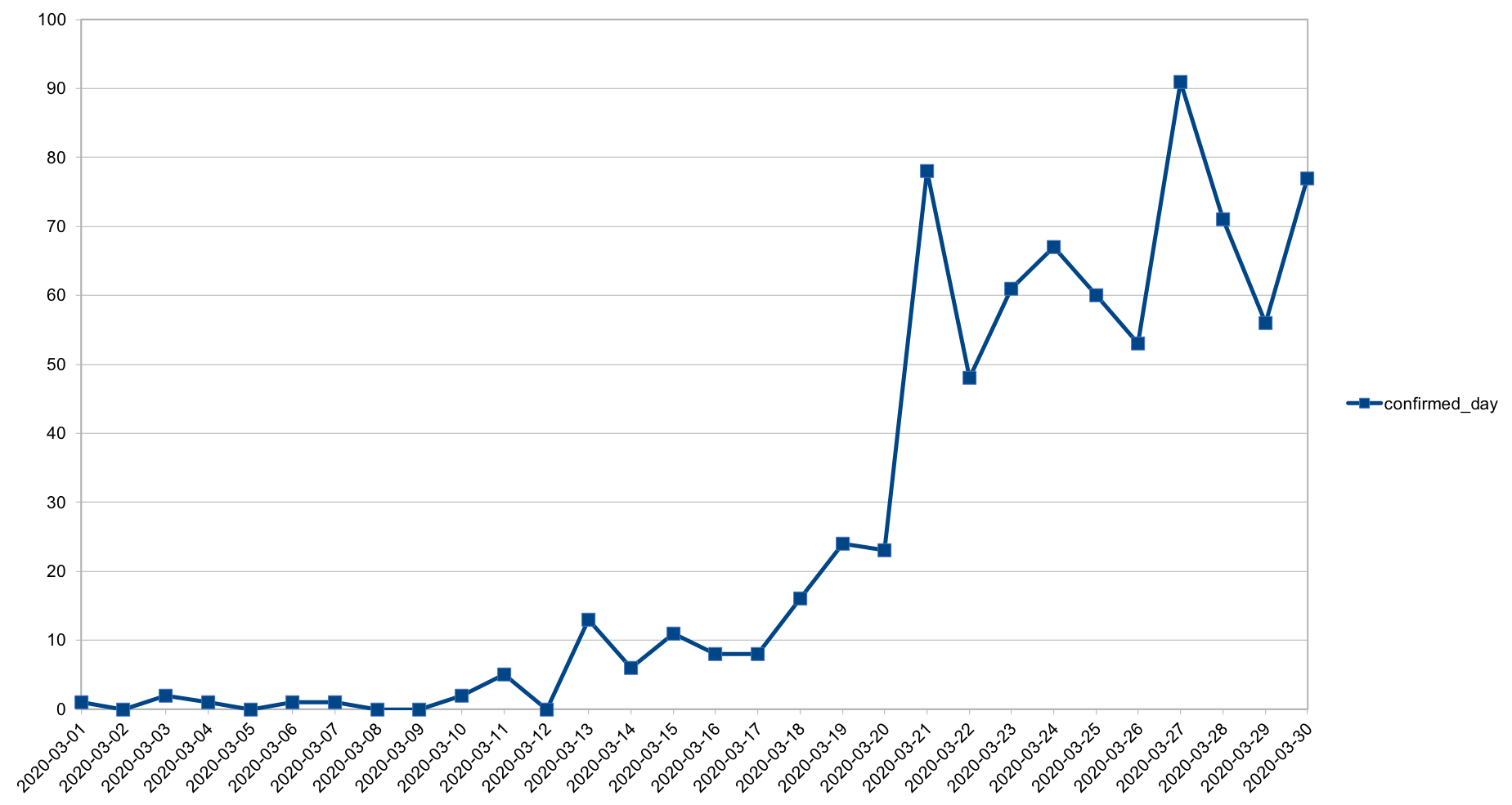 In this section, we are going to use several advanced modern SQL techniques to get some additional insights from the confirmed_covid table.

So, we have a number of newly confirmed cases on a daily basis. Now we'll use SQL to get insights like the ones you see on popular news portals, such as:

All answers will be given with SQL; We'll use window functions and common table expressions  – AKA modern SQL techniques. We'll show that SQL can be used in complex time series analysis. With the right techniques, some facts can be extracted easily, using only a few lines of code.

Total Number of Confirmed Cases on a Country and Province Level

If you are an advanced beginner in SQL (as most of us are), you are probably familiar with traditional SQL statements like SELECT, FROM, WHERE, GROUP BY, HAVING, and ORDER BY. If we want to calculate the total number of confirmed cases on a country and province level, we can use an ordinary GROUP BY clause:

So, when using GROUP BY clause data are divided into groups. Rows with the same GROUP BY column (country and province_state in our example) are put into one group. For each group, the total sum is calculated and returned as a result. Rows are collapsed, that is, merged; for each group, one row is displayed as the result.

From our original table, one row will be returned for each country and province/state. Here is how the result is going to be displayed for China and Colombia: 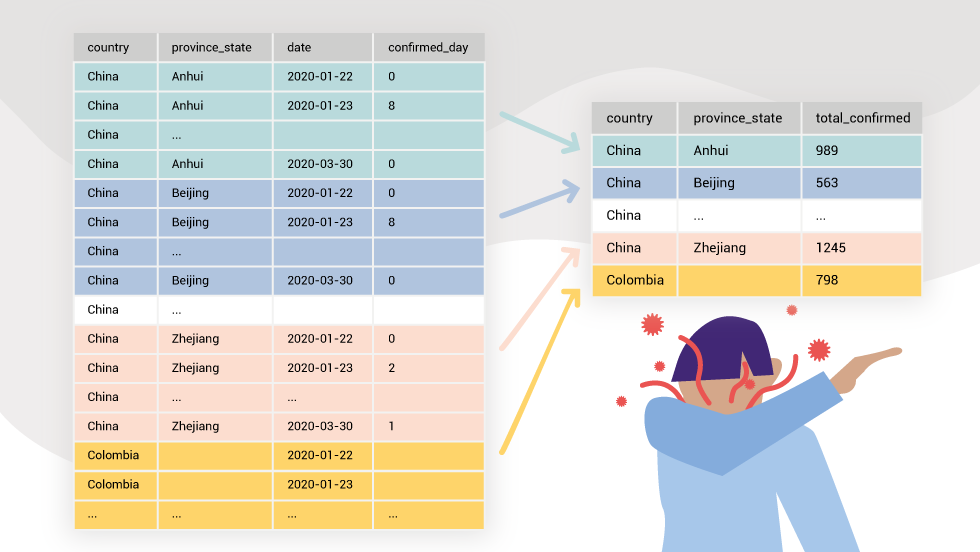 This simple report is produced with a simple GROUP BY statement. If you want to learn more about GROUP BY aggregations, I suggest that you try the interactive online course SQL basics on learnsql.com.

If we want to go one step further, we could also display a higher-level summary – the total confirmed cases on a country level and the total number of confirmed cases worldwide. Let's see how we can do that by using the ROLLUP clause.

Creating a Country-Level Summary of Confirmed Cases With ROLLUP

We can add a higher-level summary to this output . If you want to see all three totals (by province, country, and total worldwide) you could write these three statements:

The first result would give you the total sum of confirmed cases on a country and province/state level, a second one on the country level, and a third one worldwide.

However, you can write simpler code by using the ROLLUP() clause:

Using group by ROLLUP(country, province_state), SQL will generate all three GROUP BY clauses and the output will look like this: 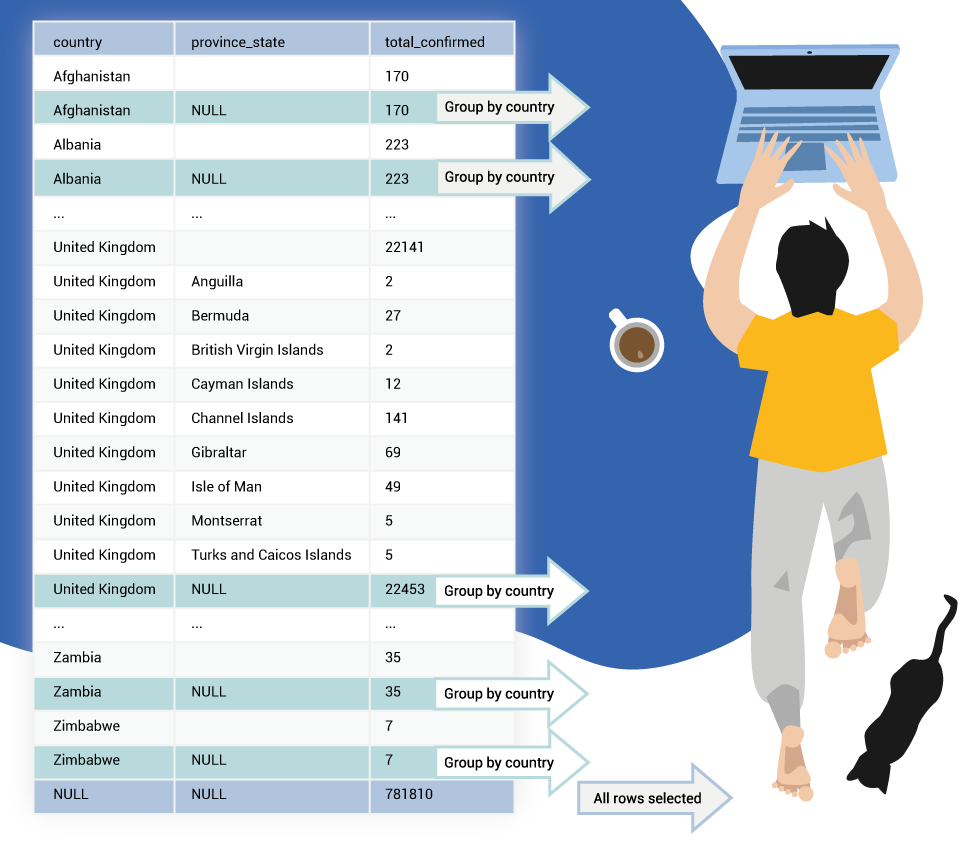 ROLLUP() is neat because you are getting everything that you need in one output, using one simple line of code.

Calculating a Running Total With OVER and PARTITION BY

A running total (or cumulative sum) is calculated in SQL using aggregate window functions. Like the aggregate function used with the GROUP BY clause that we saw earlier, a window function also performs calculations across a set of rows. However, this result is not presented as a single output row per group, i.e., rows are not collapsed in the result table. Instead, each row from the input table is returned and the resulting value is assigned to each row in the table.

A window function is denoted by the OVER clause in combination with the PARTITION BY and ORDER BY keywords. Here is the short description of what these keywords do:

Let's use an example to explain this. Here is what we got after running the SQL statement for Croatia: 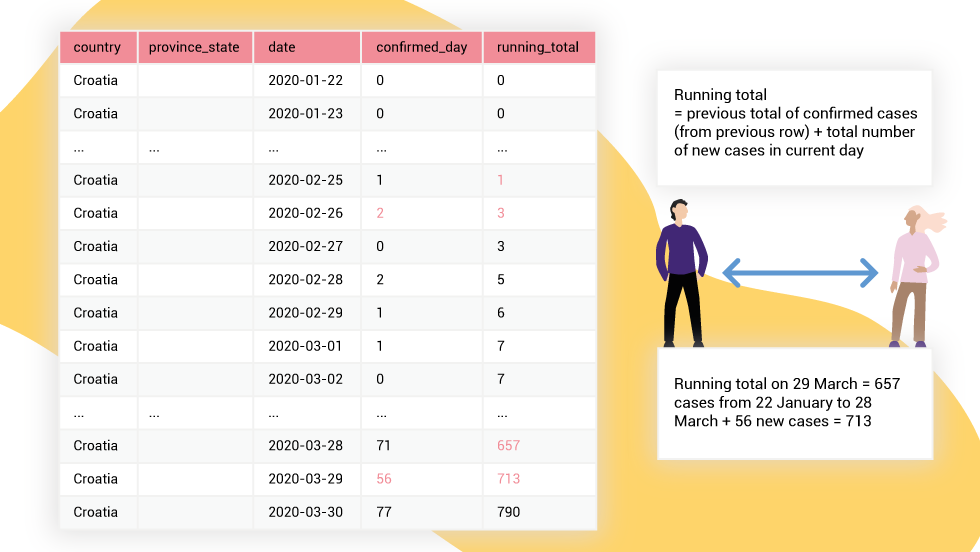 For each day, we now can detect how many confirmed cases we had in total and how that number changed through time. Keep in mind that we made this calculation for each country and province/state separately, which means that running totals are available for each country in the confirmed_covid table.

This means that we had a 100% increase in the number of daily confirmed cases.

To calculate this number, we need to assign to each day in our table a value for the cases detected the previous day. We can do this using the LAG() window function:

Again, rows are grouped on the country and province level and ordered by the date column. After running this, SQL displays all rows from the confirmed_covid table plus the additional info contained in confirmed_previous_day (i.e., the confirmed_day value from the previous row). Here are several rows for Croatia: 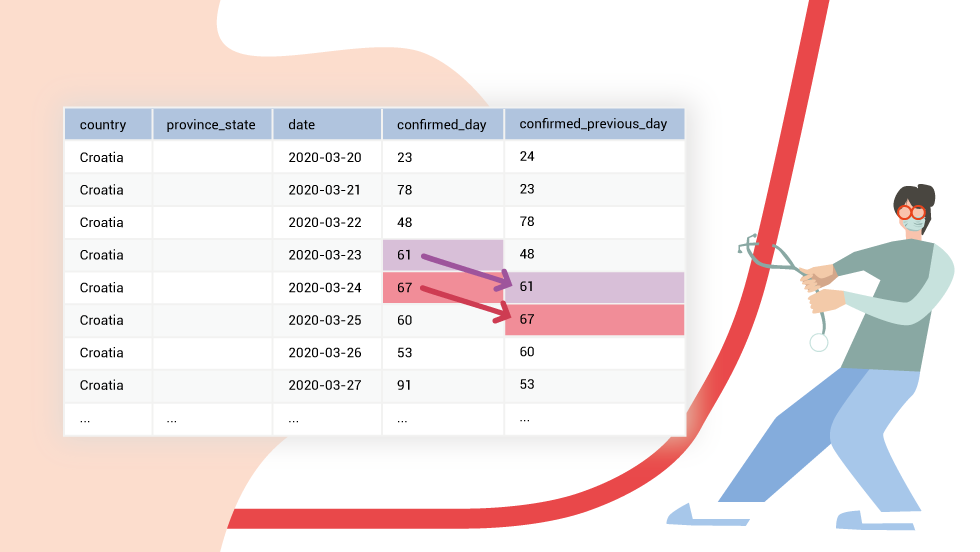 Each row now contains the number of confirmed new cases from the previous day. When we have this information, we can easily calculate the percent change using the formula:

Below is the complete SQL statement. Note that we are using common table expressions because we want to divide this relatively long query into several smaller pieces:

Here is a short explanation of what's going on:

The result after running this nested CTE looks like this:

Common table expressions are really useful when you want to organize your code in a more readable way, as they allow long queries to be broken into smaller logical units.

Using RANK to Find the Highest Number of Confirmed Cases

The last thing that we are going to do is display the countries with the highest number of confirmed cases on a specific day from 20 March to 30 March.

The idea is to rank countries by the column confirmed_day. We want the country with the highest number of confirmed cases on a specific day to have rank 1, the second-highest to have rank 2, and so on)

Here is the query, followed by a short explanation:

Here is the result:

We can see that Italy and the USA were hit hard in March.

In this blog post, I wanted to show how easy it can be to analyze publicly available COVID-19 time series data with the help of SQL window functions, common table expressions, and GROUP BY extensions. My idea was to show you that SQL is more than just SELECT, FROM, WHERE, GROUP BY, HAVING, and ORDER BY. There are modern SQL techniques that help us perform complex analyses.

You can continue to play with the data provided by Johns Hopkins. Other files are also available on my GitHub page.

Published at DZone with permission of Marija Ilić. See the original article here.