We were recently discussing a new IoT project with a client, and their most pressing questions and product requirements centered around OTA (over-the-air) device updates. Consequently, we thought it would be useful to share some best practices for supporting OTA updates, since they are an increasingly important factor in determining IoT system success.

What Is OTA and Why Is It Important?

You’ve probably heard about the numerous OTA-related horror stories in the past couple of years that have seen people locked outside rental properties by bricked smart locks, stuck watching a single channel on their smart TVs, and far more seriously, unwittingly driving cars that can be remotely controlled by hackers. We’re going to outline how we approach designing OTA update capabilities so that you can avoid building a system with a similar fate.

An over-the-air (OTA) update is a mechanism for remotely updating internet-connected hardware with new settings, software, and/or firmware. The OTA update mechanism is a core part of a system’s architecture, with the remote hardware device being responsible for identifying and applying updates to itself, and the cloud server responsible for distributing updates to its connected hardware clients.

At this point in the evolution of IoT, it is well established that a robust OTA update mechanism is an essential component for any successful IoT system design. It’s not feasible to update devices deployed in the field using the traditional manual method, which involves connecting each embedded device to a PC with a cable. The traditional method doesn’t scale beyond the development phase, and failure to update geographically dispersed devices means missing out on everything from critical security patches and bug fixes to the latest product features. 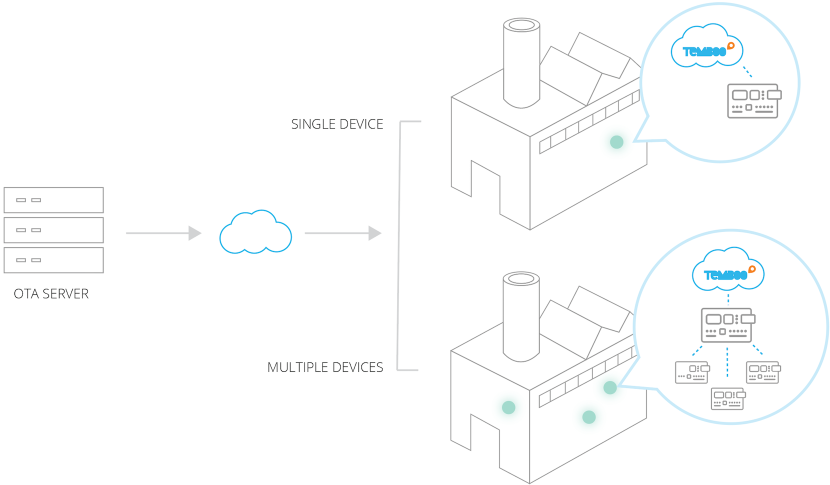 The Three OTA Architectures for IoT

There’s no-one-size-fits all approach to OTA. The right approach for a given IoT project depends on the nature of the hardware under consideration, the overall system architecture, the abilities of the team building the product, and the product itself. The most common OTA update scenarios are as follows:

Going into the technical details of each OTA architecture is outside the scope of this overview, but what’s more important are the numerous design considerations that you should be paying attention to, regardless of which OTA update approach applies to the IoT product or system that you’re building.

As mentioned earlier, many IoT horror stories involve customers being left with bricked devices as a result of failed OTA updates. What these incidents have in common is not only that the new device image was buggy, a perpetual risk when software is involved, but that the OTA mechanism was not implemented in a fail-safe manner, meaning that neither the user nor the manufacturer could easily rollback or overwrite the bad image.

Here are some key considerations to take into account when thinking about OTA update solutions for IoT systems:

Before we wrap up, here’s five questions to ask yourself when considering an OTA update technology in the IoT context:

Published at DZone with permission of Jessica Califano. See the original article here.