The IoT world is powerful but also quite complex. There are many protocols and vendors, and the landscape is fragmented. [As Matt Turck has already shown in 2018.] 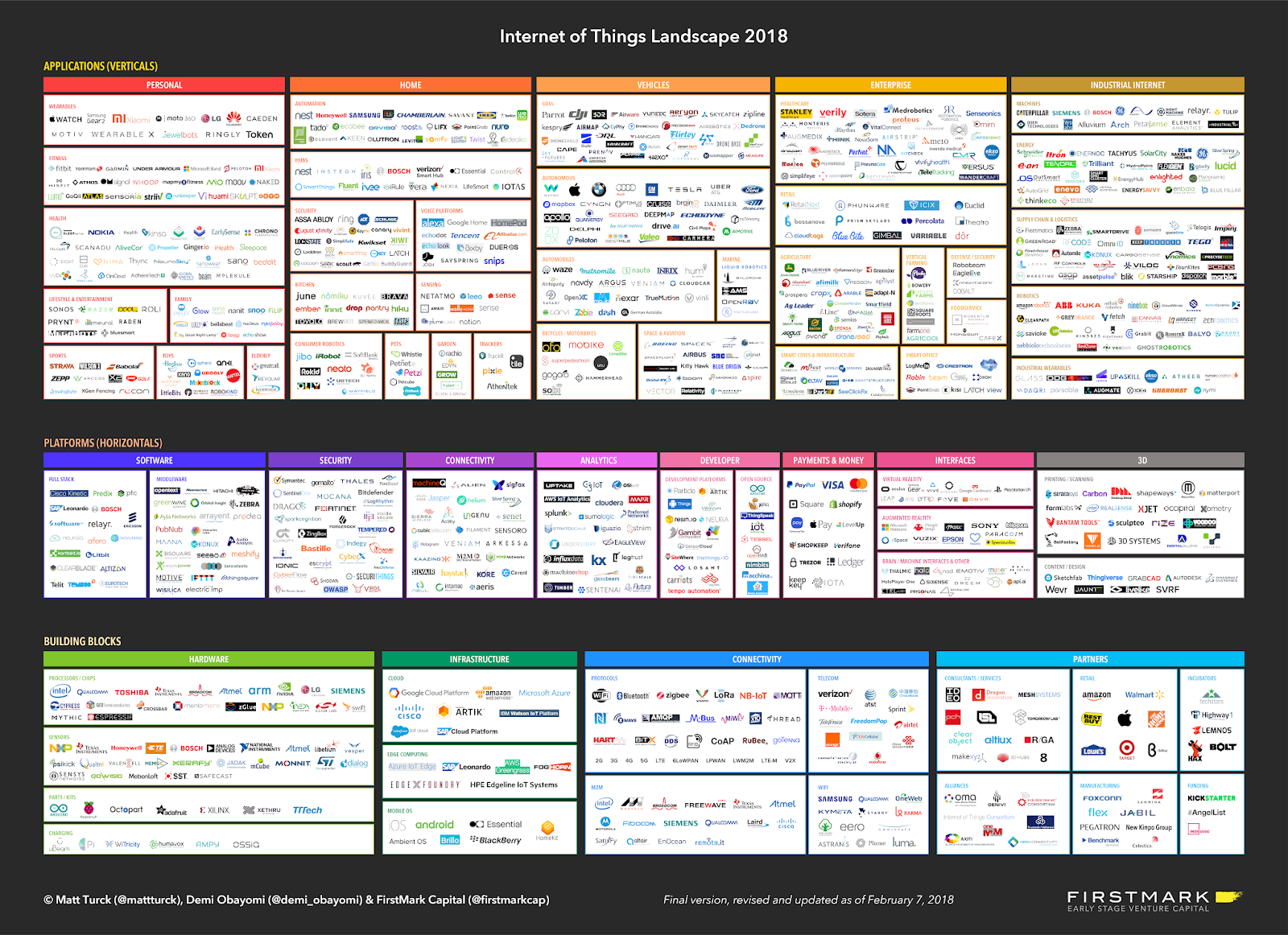 Creating stable and effective prototypes is becoming essential for every web or embedded developer. However, to create a prototype, you have to deal with:

Even for a basic prototype, this process could take weeks. In this article, I’ll show you how to build a robust IoT prototype in only a few hours by leveraging the power of Arduino, Heroku, and Node-RED.

Many IoT projects focus only on reading data from sensors. However, for real prototypes, you need bi-directionality of the data, from the IoT sensor node to the cloud and back from the cloud to the actuators. For all of you with more knowledge in web development and a little less in embedded systems, here are the definitions of sensor and actuator.

If you want to know more, read this article about the difference between sensors and actuators.

So let’s create a sample app that will allow you to quickly create prototypes. We’ll use the following components:

In our sample app, we’ll create a scenario where one Arduino board sends data from a sensor. (We will use luminosity, temperature, and humidity sensors.) The other device will show some information on the LED matrix as soon as it gets the information. 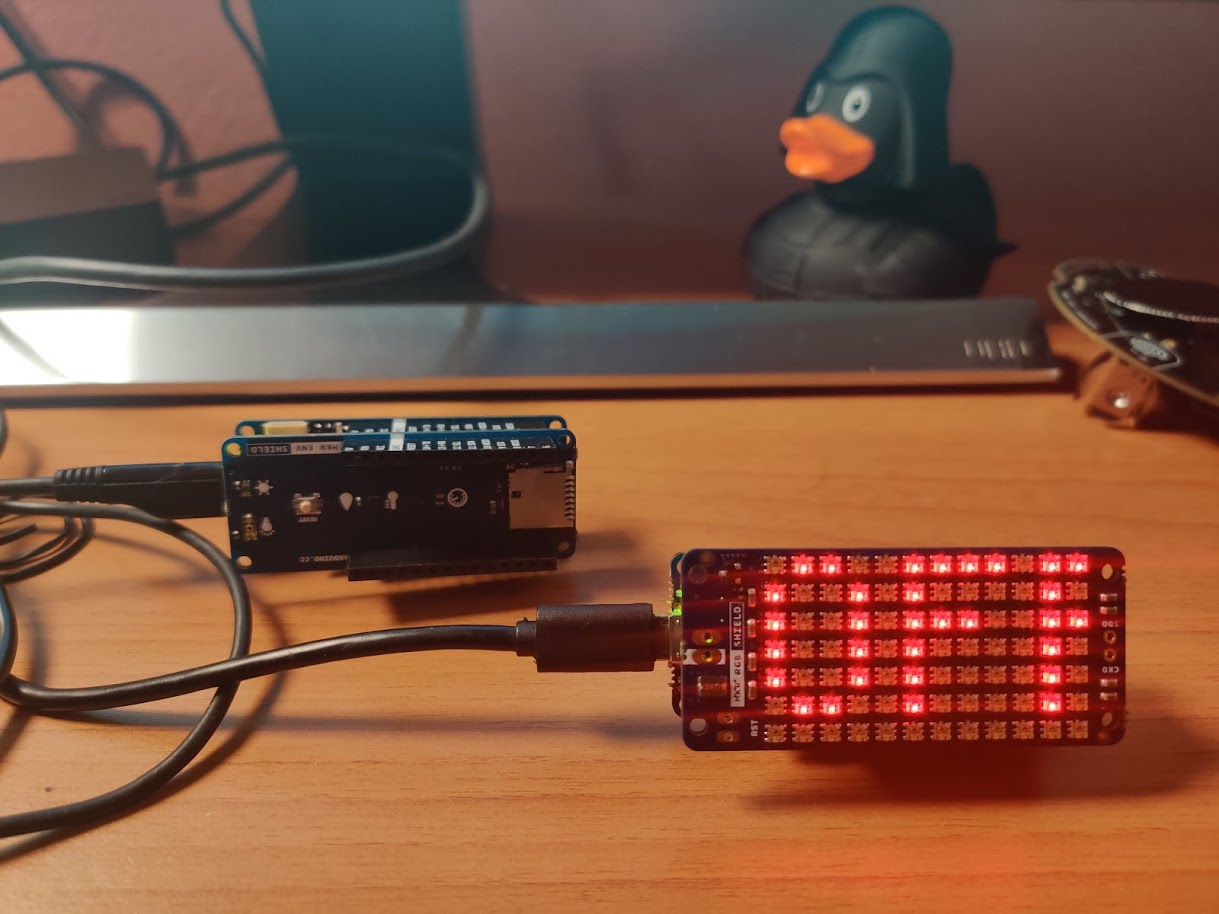 As a first step, while we wait for the hardware to arrive, we can set up Node-RED. Node-RED is an incredibly powerful low-code programming tool for event-driven applications based on Node.js. It allows you to easily and graphically wire together flows between hardware devices, then deploy those flows with just one click. Node-RED is built on Node.js. (I will assume you are already familiar with Node.js. If not, then you can learn about and install it at https://nodejs.org/.)

TL;DR: If you want to quickly test the application, you can skip this part and jump to the section Wrapping It Up, which has a link to a quick-start version of this project.

However, if you want to understand how to build this yourself and eventually update your work to the latest version of Node-RED, please follow the detailed instructions below.

It’s a little bit of work to install Node-RED and get it set up, secured, and working, so let’s walk through the steps. To start, be sure you have the latest stable version. For our purpose, we are going to use git.

Now Node-RED should be up and running, usually at http://localhost:1880. Open it, and you should see an interface similar to the following:

To add security to Node-RED it’s best to protect the interface (static assets), the visual editor, and the Admin API. To do this, follow the official guide about Securing Node-RED. To add the credentials, we need a way to create a password and to obtain a hash for it. Node-RED has a simple tool for this called node-red-admin. It can be installed via:

Here is the dir where we will put our configurations.

Let’s also install the Arduino plugin in the same directory.

The string given back is the hash we can use in the settings.js file. A proper settings file can be found on the Github repo of Node-RED. Let's start with that file and adapt it to our needs. First, we have to uncomment the part about adminAuth and change it to something like this:

This allows us to use environment variables to set the hash of the password. (we just created it with the hash-pw command of node-red-admin), and a username (with fallback to admin).

The same will apply to another section of the file:

My complete settings file is available at https://github.com/mastrolinux/node-red-iot/blob/master/0001-Added-Arduino-IoT-Cloud-deps-and-Heroku-ready-setup.patch.

The final important step is to set the port.

Be sure to save your work in a proper directory. Usually, Node-RED saves the data into $HOME/.node-red, but this will not work well with our setup in Heroku, nor is it useful to have the source code revisions for our work. So I added...

The full file settings.js without comments is less than 40 lines.

To declare the needed variables, you can create a local .env file like this one:

As soon as we see the Node-RED interface again, we will be prompted with a password.

Our server is now secure but still running locally. And after the login, we should be able to see the new Arduino plugin available in the left palette.

The Arduino IoT Cloud plugin for Node-RED allows Node-RED to read data from the sensors, send a payload back to the board, inject a value in one of our Arduino IoT Cloud properties, and access the historical values of a property. A property is the logical web representation of either a sensor or an actuator.

Now it’s time to make everything simpler and use Heroku to deploy Node-RED to our staging environment.

Heroku is a PaaS vendor that makes it easy and fast to deploy apps to the cloud. We’ll use the Heroku CLI to set up and deploy to Heroku from our local machine. (The best way to install and understand how this works is by following the official tutorial on how to install Heroku CLI.) Once installed, in the same directory of our Node-RED instance, run:

Then create a new app:

And finally, give it a better, memorizable name:

From now on, we’ll let Heroku handle the heavy work with deploying and running the app, as it supports Node.js and Grunt out of the box.

To run Node-RED locally with Heroku, mimicking 100% what will happen in production, you can run...

This will open the app at http://localhost:5000. However, we want to run and deploy our app on Heroku. This is just a matter of setting our vars and then pushing to the Heroku git endpoint.

And see it online!

We now have a secure Node-RED instance running on Heroku and ready to hook up to our Arduino boards.

I’ve also built a quick way to reproduce the steps I’ve shown in detail. Full instructions are available at my node-red-iot repo on Github.

Here’s a recap of what we learned today: