Let’s begin by understanding the concept of AWS IoT.

It is a part of the Amazon Web Services Cloud Computing platform. According to Forbes, Amazon owned nearly half of the public cloud infrastructure market in 2019, valued over $32 Billion.

AWS IoT Core is a cloud service on which the AWS IoT platform functions. It is managed and lets connected devices interact securely with cloud applications and other devices. AWS IoT Core can:

AWS IoT core makes it easy to use various Amazon services to build IoT applications without managing any infrastructure.

Let’s discuss the features of AWS IoT Core to understand it in a better way.

3. What Are the Features of AWS IoT Core? 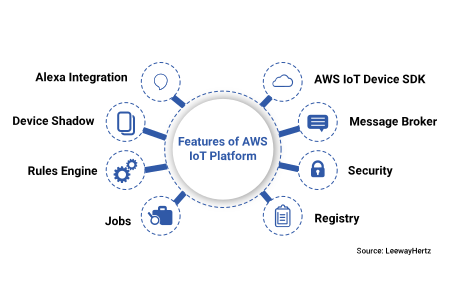 Features of AWS IoT are:

AWS IoT enables internet-connected devices to communicate with each other over the AWS cloud. IoT applications collect information, process it and send messages in JavaScript Object Notation (JSON) format on MQ Telemetry Transport (MQTT) topics. MQTT topics are UTF-8 strings used by the broker to filter messages for each connected device. The working of AWS IoT has been explained as follows:

Apart from this, the AWS IoT platform offers various services that play an essential role in its working. Let us learn about them. 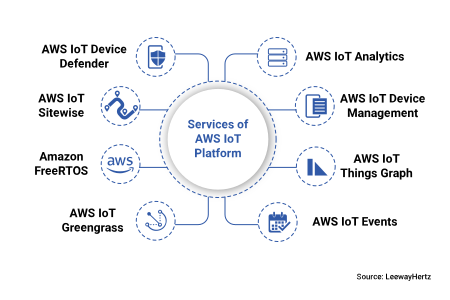 Services included in the AWS IoT Platform are:

5. Why should you choose the AWS IoT platform? 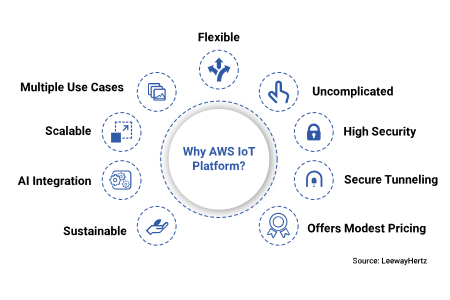 AWS IoT Platform is a suitable choice for building IoT platform as it offers various advantages.

Advantages of the AWS IoT platform are:

Let’s discuss some of its use cases in detail.

6. What are the use cases of AWS IoT?

Here we are discussing four use cases of AWS IoT, which are listed as follows:

7. How to create an IoT infrastructure and build an IoT app using AWS IoT?

A while ago, a client reached out to us to make an AWS IoT enabled soil temperature monitoring system. Following is a brief of steps we followed to build that system for our client.

The first step was to install AWS CLI. AWS CLI refers to Amazon Web Services Command Line Interface. This tool assisted us in managing our amazon services. It was essential to install AWS CLI and configure AWS credentials before starting with AWS IoT.

The latest version of AWS CLI is AWS CLI version 2. We were able to quickly set up AWS CLI installation by running the following command:

Running this command enabled AWS CLI to give us the following information:

AWS Region refers to the servers where we wanted to send our requests by default.

The Output Format refers to the format in which our results were formatted.

We used the following command for verification of installation to list the commands available for AWS IoT:

To get help for subcommands, we used:

Step 2 – Registered a Device in the Device Registry

The device is known as “thing”, which were temperature sensors in our case. We created a thing in the thing registry before connecting it to AWS  IoT. Thing registry enables us to keep track of all things connected to AWS IoT.

To create a thing, we used the AWS IoT Console, but the following CLI command can also be used:

For confirmation of the thing created in the Thing Registry, we used the following command:

We wanted to ensure that AWS IoT and the thing are able to communicate securely. We secured this communication by X.509 certificates, which needed to be activated before use.

The process of provisioning the certificate included:

Usually, certificates can be provisioned in AWS IoT by using:

We used the following command to create and activate the certificate:

The output of this commands included:

We saved the keys in seperate “.pem” files. To save the certificate, we used the following command:

Attach Certificate to the Thing

In order to attach the certificate to the thing, the following command was used:

For example, our thing’s name was temperature sensor, so the command that displayed ARN and name was like:

So, to call “attach-thing-principal”, the following was used:

It was essential to ensure that our client had a suitable way to access and visualize all data which will be processed by the thing. Hence, we developed Mobile Application for the same.

To be able to call actions on AWS resources through the application, programmatic access was required. Both web and mobile applications needed security credentials for the same. For safe access to AWS resources, Amazon Cognito was a suitable service to use with AWS Mobile SDK for iOS and Android as it assisted us to:

We created a mobile application for our client to visualize the data in a graph format.

An iOS app was created on XCode and connected with a gateway in Amazon API Gateway. This gateway showed the AWS Lambda functions, which were required to collect the data for making graphs.

AWS IoT is a cloud platform that enables connected devices to communicate with cloud applications and other devices securely.

Amazon QuickSight is a cloud-based business analytics service which enables you to quickly and easily: 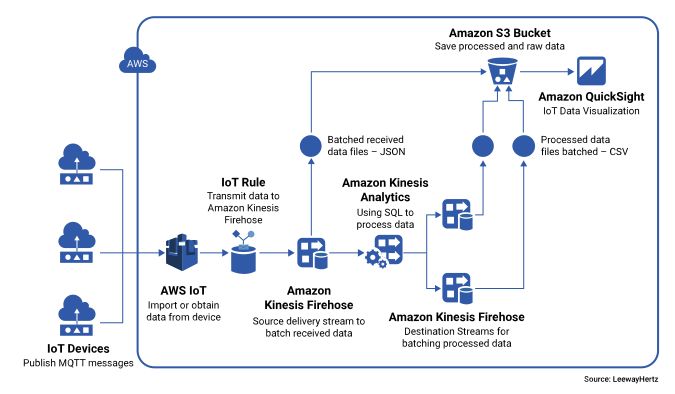 Published at DZone with permission of Akash Takyar. See the original article here.