When you first develop infrastructure for a new project, you naturally optimize for rapid development. You want to get something — anything — out the door, and you therefore want to be able to write code and debug issues quickly.

Because of that, it’s awfully tempting to spin up servers and databases in public subnets so that you can readily connect to them for debugging sessions. It’s nice to be able to ssh my-user@my-web-server to do some live code debugging, or psql -U my-user -h my-database-instance to assess the current state of your database.

Sure, AWS allows you to do that. You can expose SSH on your webservers and you can expose your AWS Relational Database Service (RDS) and Redis/ElastiCache servers to the internet for easy access. But should you? Exposing databases and servers publicly yields a pretty obvious security issue: your sensitive data is directly accessible to anyone on the internet.

You might argue “it’s fine; we lock down our VPC security groups so that only people from our office IP can access our EC2, RDS, or ElastiCache instances. Other people on the internet are blocked because of their IP addresses.” While that’s true — locking down your resources this way is better than nothing — this strategy yields two pitfalls:

This is a problem that I’ve had to solve everywhere that I’ve worked, so I imagine it’s a problem others have had to face, too. Here at Prismatic, while building an integration platform that makes it easier for B2B software companies to provide integrations to their customers, we were able to solve this. Let’s look at how to do it right, optimizing for both security and accessibility at the same time.

Let’s suppose you’ve followed security protocols, and have placed your various AWS resources (EC2, RDS, ElastiCache, etc.) into private subnets and removed public access to them. How can you securely grant access to members on your team (like your senior devs and DevOps) who need them? AWS provides Systems Manager to let you inspect and access your AWS resources — even those residing in private subnets. With Systems Manager, users exchange their AWS credentials for temporary shell access to EC2s. They can get that access both on the CLI, and through the AWS web console.

To enable access to your EC2s, simply install the AWS SSM agent onto the servers that you spin up. What’s the deal with the extraneous “S” in “SSM”, you might ask? It’s historical — Systems Manager used to be called “Simple Systems Manager” and the extra “S” stuck — just go with it. Good news — if you’re building your servers off of Amazon Linux, macOS, Ubuntu Server, or some Amazon-provided Windows Server images, the SSM agent is already installed for you — you just need to turn on a machine and grant it a specific role defined in AWS’s docs.

Once you have an EC2 with the SSM agent installed, you can open a shell into your instance with the aws CLI tool: 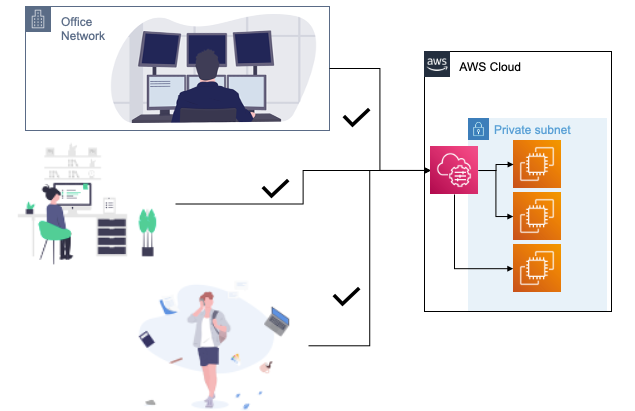 When you have the SSM agent installed, you don’t need to worry about juggling IP whitelists. Your systems management teams can access resources from anywhere (the office, at home, or even a coffee shop) using their AWS credentials. And, without AWS credentials John the junior dev has no access to production databases. Sorry, John!

What About Accessing RDS or ElastiCache? 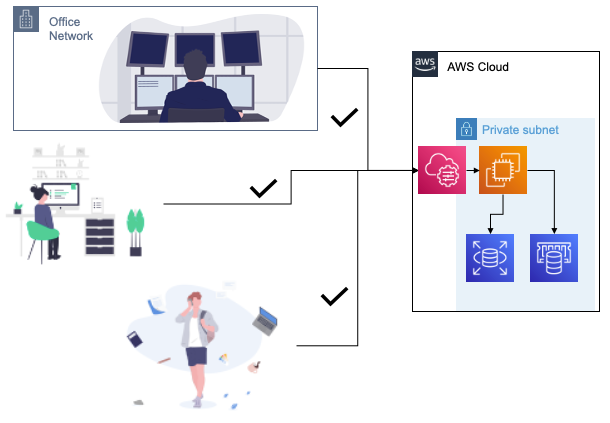 You might ask, “can’t I just spin up a bastion in a public subnet, and SSH into it?” Yes and no. Yes, you can totally do that. No, it’s not a good idea — that opens up the same security vulnerabilities that leaving your servers and databases in public subnets does.

At this point, we have options for remoting in to EC2s directly through Systems Manager, and we can access our databases indirectly via a bastion EC2. The last thing I want to look at is leveraging SSH tunnels through the bastion to access database resources as though they’re locally accessible. That way, you can connect your favorite database GUI, like pgAdmin, to your RDS instances.

First, we need to get an SSH public key into our bastion. I’ll assume you already have a key in $HOME/.ssh/id_rsa.pub. We'll use the aws CLI to temporarily load up that key for user ssm-user into our bastion:

Next, I’m going to modify my laptop’s $HOME/.ssh/config file so that servers starting with i-will proxy their connections through the aws ssm start-session command we used earlier. I'll add:

Now, I can simply ssh ssm-user@INSTANCE-ID to access my instance:

Now that I have SSH access to my bastion (even though it’s in a private network that’s not accessible from the internet!) I can spin up SSH tunnels like I would with any other SSH connection. To create a tunnel to my RDS instance, for example, I can simply run:

And then from a separate shell I can access my database “locally” on port 5000:

Cool, huh? Using tunnels through your bastion you can access any resources that reside in your private network without needing to expose them to hooligans on the internet… or John the junior dev.

Published at DZone with permission of Taylor Reece. See the original article here.