Don’t worry if you don’t know what a JSON Web Token (JWT) is. I’ll cover that in a bit.

And you don’t need to know any Kotlin, either. If you’ve got some decent programming experience with any programming language, you’ll be able to follow through without any difficulty. If you’re a Java programmer, though, you’ll feel right at home because Kotlin uses the Java API to do everything. It’s got a very sparse syntax with a lightweight standard library.

In fact, let us cover all of the features of Kotlin used in the code that goes with this article.

A Crash Course in Kotlin

To declare a variable that can be read from and written to, use the var keyword:

Semi-colons as statement terminators are optional. But it’s a good practice to have them, anyway. All throughout our code, we’ll use semi-colons to terminate statements.

To declare a read-only variable that can only be initialized once, use the val keyword:

To create a class:

To create an object of the Student class:

In the above code, name and age are properties. Kotlin creates a getter for the name property and a getter and setter pair for the age property. Also, the Student class in the listing above gets a parameterized constructor.

To create an object of the Student class and use it:

To create a class with optional parameters in its constructor:

Functions in Kotlin can exist independently outside of any class. To create a function that returns void (Unit is a type that means void):

The Unit keyword is optional. The same function could be re-written as the following:

To create a class with instance methods:

Kotlin does not have static classes. Because functions can exist independent of classes, you just write your functions that you would have wanted to write in a static class in a separate file.

Sometimes, you want to create a class with no methods just to hold data so you can serialize/deserialize it or just hold some data in it so as to pass that data across the boundaries of your application. Such classes are referred to by various names, such as Data Transfer Objects, data objects, beans, Plain Old Java Objects (POJOs), or Plain Old CLR Objects (POCOs) in the case of C# and .NET.

To create a class of that kind, you’ll simply add the keyword data before the class keyword like so:

When you create a data class, in addition to the getters and setters for properties, which Kotlin creates even for classes that are not marked as data classes, Kotlin generates the following methods for the data class behind the scenes:

Annotations: You can annotate a method, constructor, or class like in any other language:

All classes and methods in Kotlin are non-inheritable and non-overridable, respectively, unless otherwise explicitly stated by declaring them with the open keyword.

In Kotlin, packages and Visibility Modifiers work exactly like they do in Java.

To create a Singleton object:

You can put it inside a class, as well. In this case, the object will be able to access the internals of its containing class.

That’s pretty much all you need to know to get started and be productive with Kotlin.

What We’re Going to Develop

We’ll create a client/server application that gets from a web API a list of book recommendations for a logged-in user based on the user’s interests or likes. We’ll store the user’s likes in a database.

We’ll write both the client and the web API in Kotlin. The client will be a desktop application written using the Swing/AWT libraries. The server is an HTTP Servlet that returns data objects declared in a library named Contracts as JSON strings. We’ll call our application—in fact, we’ll call this whole system—by the name Bookyard.

Here’s what the high-level component architecture for Bookyard would look like: 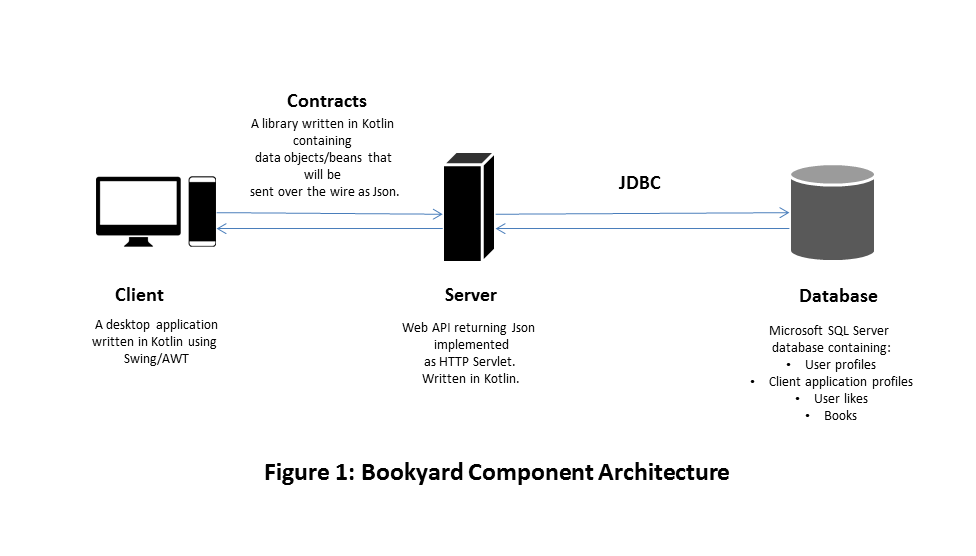 Assuming the servlet application is running, when the user launches the client application, a login dialog will appear. 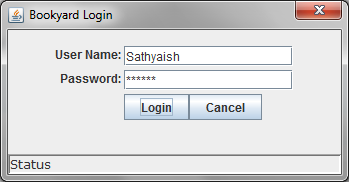 A successful login will dismiss the login dialog and display a window listing the recommended books for the logged-in user. 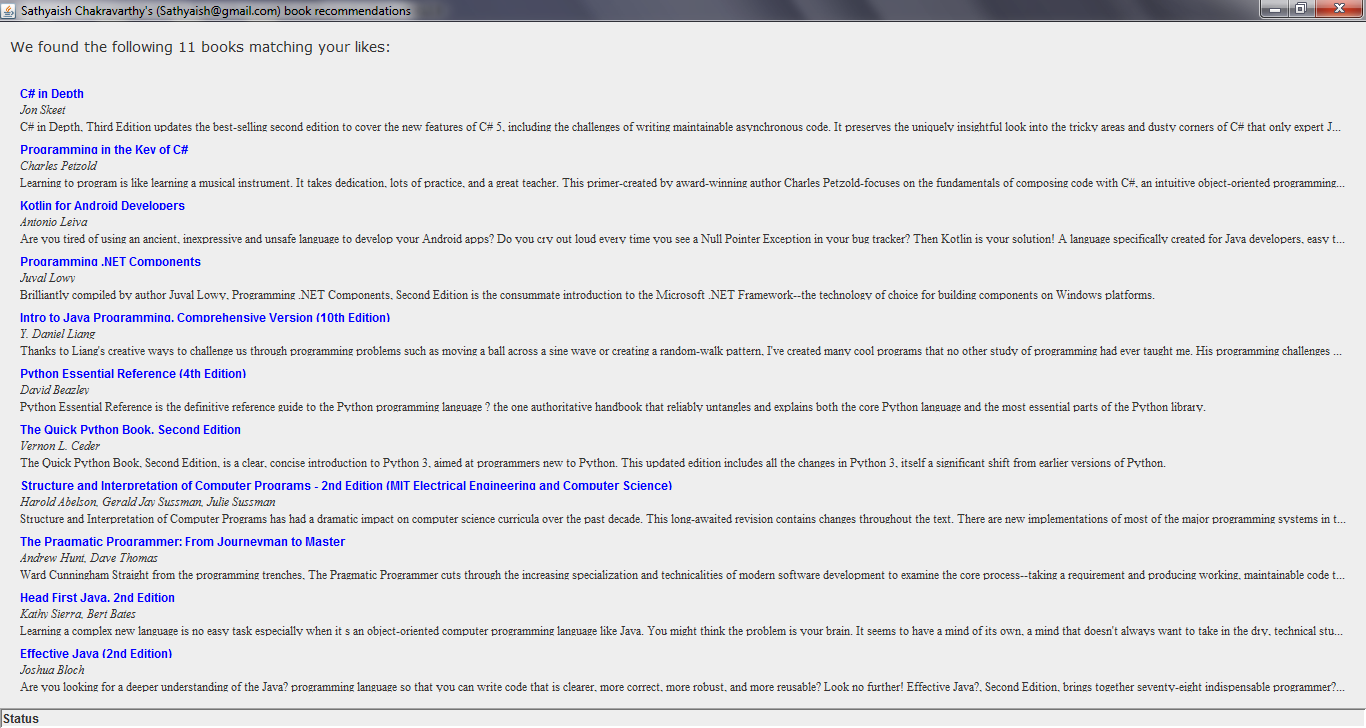 Please ignore the aesthetical anomalies of the graphical user interface.

OAuth 2.0 and Token /Claims Based Authorization

In order to understand how we’ll ensure secured communication between the client and the server of Bookyard, I’d like to provide a to-a-four-year-old explanation of some of the highfalutin terms popularly used in elite architect circles.

You had two parties:

In those cases, a simple user name and password-based authentication was sufficient to validate the identity of the user. When the user logged in, the server would issue a session ID and an authentication cookie to the user’s browser. The browser would carry these two with every subsequent request to the server.

This all worked fine until the number of users outgrew the server’s capacity to handle requests.

When you had two servers running the same application code, you had a problem. If the login request came to server A, which issued a session cookie and an authentication cookie to the user, server B didn’t know anything about those cookies. Therefore, any subsequent requests coming in to server B even after the user had innocently validated his identity earlier with server A, would fail with server B.

One obvious solution to this problem is to make server A and server B share their session IDs. This could be done by having an external state server that held the session state for the entire Web application in an external data source, such as a database or an in-memory state server.

Below is a diagrammatic representation of this simple sequence of three interactions. 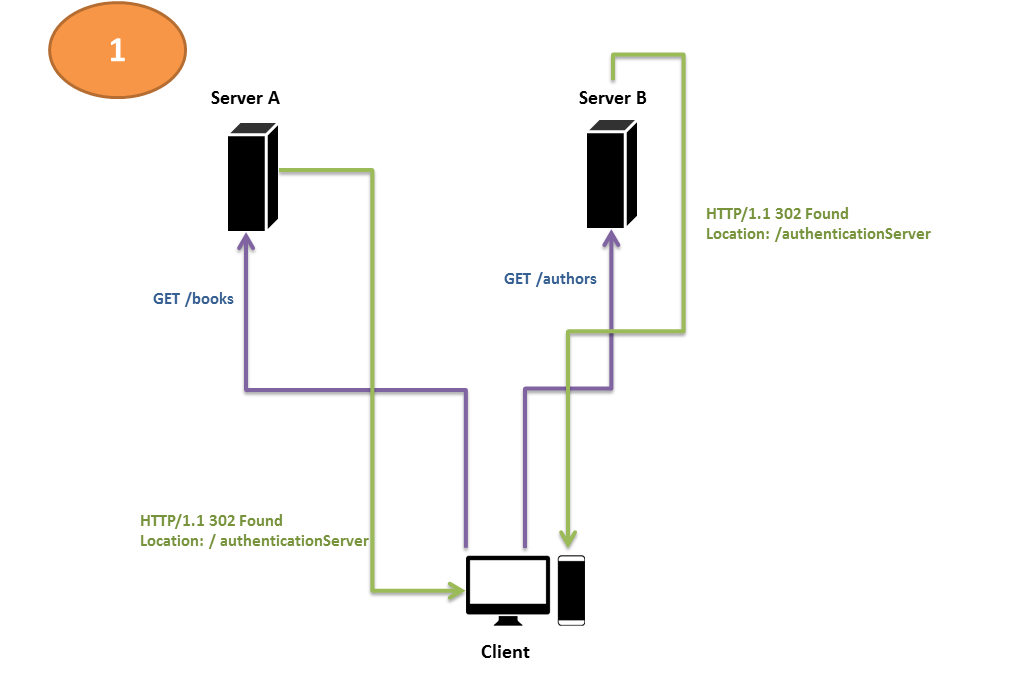 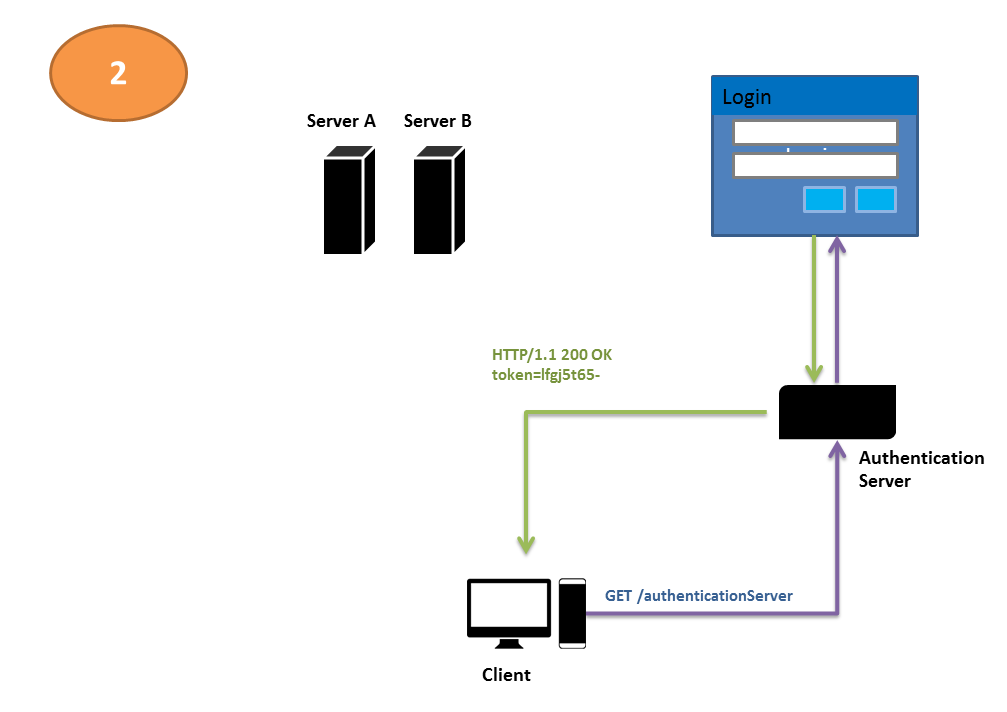 The user’s request is then redirected automatically back to the original URL he intended to get the data from-i.e., one of server A or server B. This time, his request carries with it the token, so either of the servers fulfills his request. 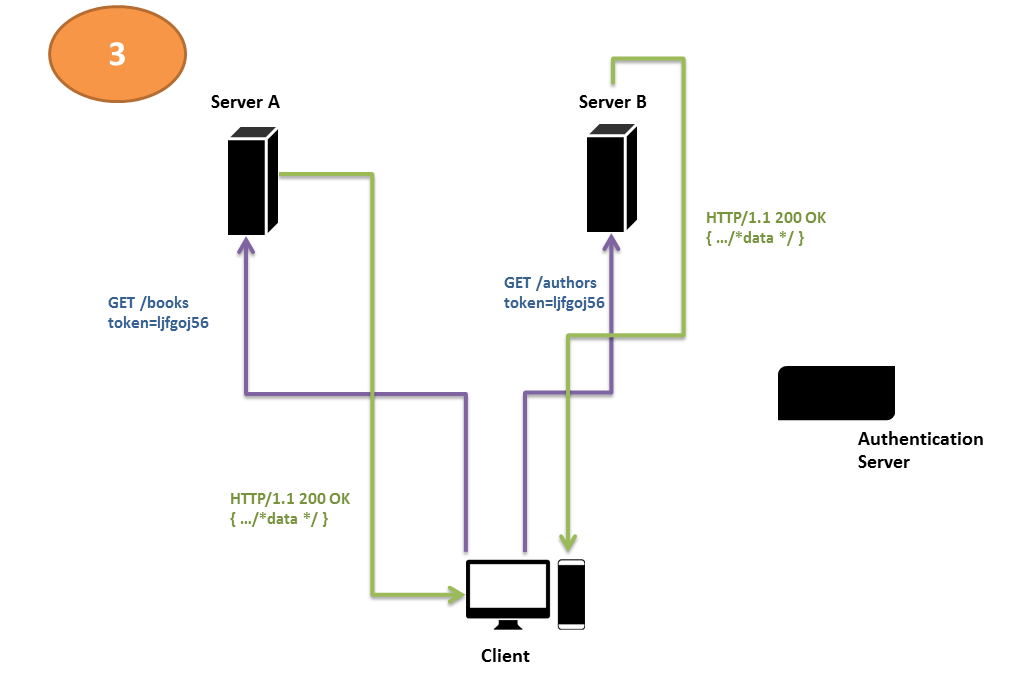 I’d like to confess that the names authentication token and Simple Authentication Server Workflow are names I have made up. You will not find them in security literature. But in deliberately flying by the seat of my pants on good accord, I am trying to avoid trespassing names that already occur in security literature with specific connotations. If I named this token an access token, for example, or if I named the series of steps described above as Authorization Workflow, I’d be trespassing a commonly accepted nomenclature that we’ll make a nodding acquaintance with later in this article.

The above series of steps, though potent as a basic building block for more specialized variants, is rather simplistic in that it does not describe the contents of the token and ways of securing it against theft. In practice, how we name such a token is predicated on such puritanical considerations.

The evolution of the Web in recent times has opened up a slew of interesting possibilities that call for variations on the workflow described above.

Big players, such as Google, Yahoo!, and Facebook (to name a few) command large user bases of the total Internet population. This has encouraged users and Web application developers to trust these big players to authenticate users for their identity, consequently freeing up Web application developers to concentrate on developing just business logic, delegating the authentication of their users to these giants.

Imagine building a job search portal. You need to validate that the user is above 18 years of age and has a valid social security number. You don’t really care about any other information about the user. In this case, you could use the US government website to validate the user against these two parameters and receive a token containing identification information about the user. This specific need for authenticating a user’s identity dictates what the contents of the token will be.

Another use that has come to light is the sharing of data from one Web application to another. Imagine yourself developing a photo editing software for your users. Instead of having users upload pictures to your Web server, you could pull out their pictures from their Flickr accounts, edit them in your application, and save them to the user’s dropbox or back to their Flickr accounts. In this case, you don’t care about the user’s identity as much as you care about their permission to use their Flickr photographs and their dropbox account.

Both the above uses—namely, the authentication and authorization of users—dictate the separation of the server granting the token, the role of such a token, and consequently its contents.

Though OAuth 2.0 access tokens are opaque strings, the authorization server may, upon request, attach additional information about a user, such as his full name, email address, organization, designation, and what have you into the token container. Such a workflow is illustrated by a variation named Open ID Connect, which builds on top of the OAuth 2.0 framework. This token would then be called an ID token. This would obviate the necessity for a database look-up. If such information were to be required by either of the servers (A or B), they could simply read it from the ID token itself without making a trip to the database server. Each such optional datum attached to an access token is known as a claim, as it establishes a claim upon the identity of the user. For this reason, token-based authentication is also referred to as claims-based authentication.

The client or server may communicate using tokens even when their dialog does not pertain to authentication or authorization. With each request, the client may package the information it needs to send to the server in the form of a token, although it wouldn’t be called an access token in that case. You’ll observe later that the login dialog of Bookyard Client sends the user’s username and password in such a token when making a login request to the Bookyard server. That is an example usage of a token of this type but not for the purposes of behaving like an access token.

Scenario 2: The Distributed Web and OAuth 2.0

This mechanism of claims-based authorization described in the above paragraphs has opened up the Web to new possibilities. Consider a scenario where you needed to import your Gmail contacts into LinkedIn so you can invite them all to join your Linked In network.

Thankfully, a bunch of guys at Twitter got together and said, “That must change.”

They started by identifying that in a transaction of the kind described above, there are three parties involved:

They wrote out a bunch of rules that both the resource server (Gmail in this example) and the third-party application (Linked In in this example) would have to incorporate into their code in order to perform claims-based authorization so that you wouldn’t have to give your Gmail username and password to Linked In.

They called this grand scheme of interaction OAuth. It has since spread like wildfire.

OAuth has, since its advent, been revised twice as v1, v1a and v2.0. Version 2.0 is the most recent and popular one, and the versions are not backward compatible. Any reference to OAuth in this article without an explicit version suffix must be understood to mean OAuth 2.0.

Today, virtually every user, knowingly or not, uses OAuth. Wherever on the Web you see buttons of the kind below, that is OAuth 2.0 in action.

OAuth 2.0 access tokens are opaque and can be any string—even the string “Hello, World!” But such a value offers no security. In practice, an access token is a bit more useful than “Hello, World,” as it carries an expiry timestamp and may even be encrypted using symmetric or asymmetric encryption.

With that brief explanation out of the way, next time, we'll dive into JSON Web Tokens and how they can be used to secure communications in your newly created Kotlin app.