In the Product Backlog, the only source of truth to build the product, many items must be included, such as non-functional requirements, risk mitigation actions, change requests, bugs, study of solutions, etc. But, first of all, it contains the user stories that describe the product features, which, in the case of a software application, are the actions that users will do on the data.

In this article, I would like to show an approach for creating the initial version of the Product Backlog for a software application, as to the user functionalities to be implemented, and its following enhancements, starting from the data and their life cycle.

There are three steps:

The basic idea is as follows: each instance of the entities at stake will have to be created, searched, listed, read, modified, and eventually eliminated, logically or physically, and for each of these events of the entity's life cycle presumably you need a function to take care of it.

Many of the role/action/entity combinations resulting from the three lists will not make sense: particularly when the combination links a role with an action that will never be performed by that role or an entity that does not fall within that role’s competences. So, to get the final set of valid combinations to be implemented, it is clear that we proceed by eliminating what is unnecessary and this is easier than the traditional process of ongoing addition of user requirements: consequently, the creation time of the initial backlog is reduced, even a lot if measures are taken in the creation steps which reduce the number of triads created.

This is the list of the main actions I use to get the product backlog of an application that manages structured data: 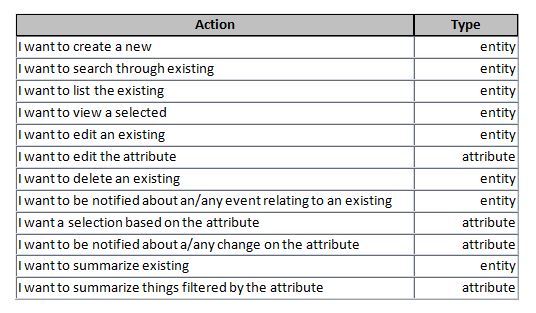 By examining the resulting list of triads, both in meetings with users and stakeholders (story-writing workshops) and within the Dev Team (planning and refinement meetings):

and a Product Backlog with a sufficient number of stories will be ready in a shorter time and development can start immediately and along the right path.

The best thing is to show how the approach works with an example. This is an application to manage an association of professionals or practitioners who can achieve qualifications for a kind of skill and who, when they become trainers, can offer courses for other members.

After some meetings with users and stakeholders, a first data model, a part of which (courses held by internal trainers) I show below, can be reached in a short time (the attributes deemed relevant are indicated — at the end of the article you can find the links to view the complete example, suitable for e.g. an association of golfers or chess players): 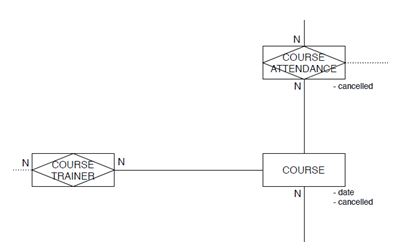 with these roles involved:

If you now apply the actions indicated above to each role/entity or role/attribute pair, you get a few dozen combinations: of these, however, you can quickly come to identify only 22 role/action/entity triads to be considered valid and suitable, at least potentially, for the implementation (the colors better distinguish the roles; consider that a trainer is also a member of the association): 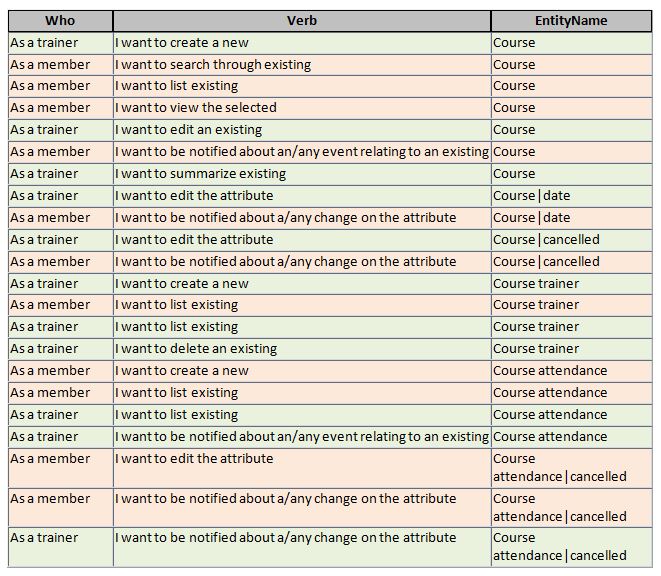 Based on this list you can work with users to clarify in the best way how each role/action/entity triad has to be interpreted in the context in which you are; the following list shows a possible outcome of the user story finishing work: 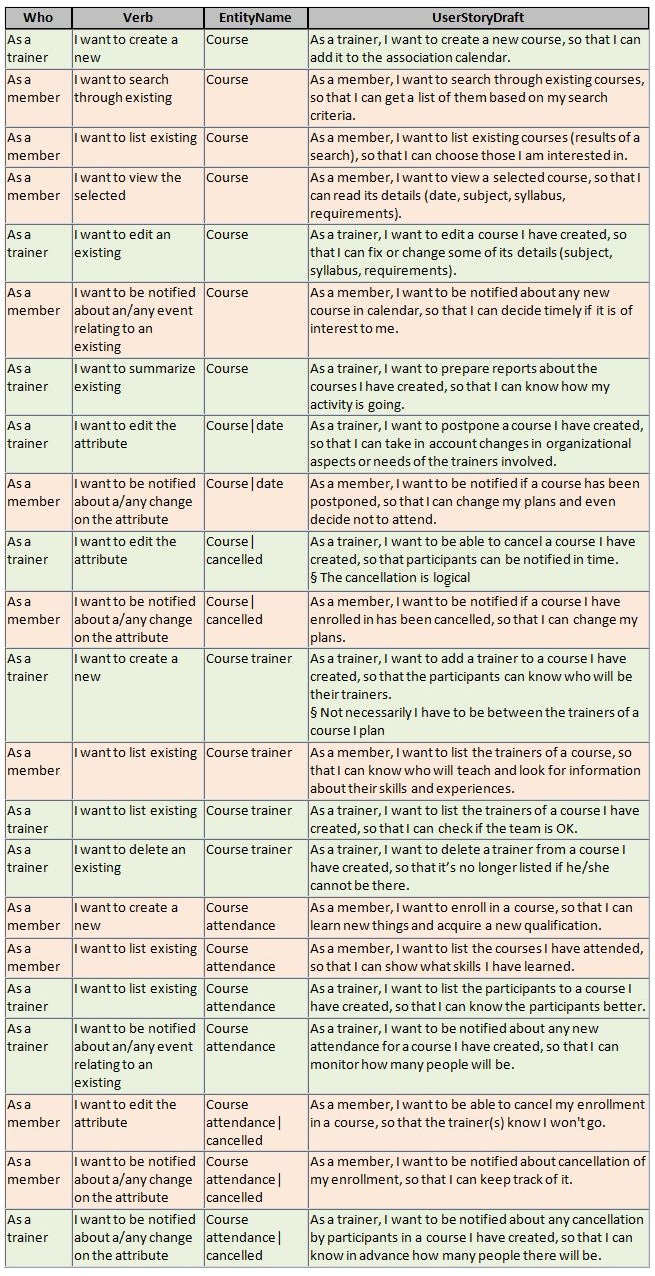 As you can see, many of the aspects to care of while implementing the application come out immediately and naturally, even things that the customer could not think about and that may emerge only in a next iteration.

I am certainly not talking about a way to automatically generate user stories: this is obviously impossible. Instead, I mean a controlled way that allows you:

What are the advantages that I have experienced with this approach to create software applications that manage data? Many, really. Let's see them in more detail.

Is the Approach Agile? Yes

One might think that the approach requires having a complete data model before starting, but this is not true at all and the approach preserves all the features that make it agile:

An approach based on the identification of the entities related to the software to be created, the roles involved and the actions that must be performed on these entities in their life cycle allows you to have significant advantages in terms of time and effectiveness to have quickly a solid initial product backlog and to maintain it over time.

To aim at this identification, the involvement of users and stakeholders is essential as always: but, by reducing the work necessary to create user stories and with the guarantee of complete coverage of the area, the approach allows you on the one hand to focus better on the specific content (the "why") of the user stories to be implemented, with more value for the business, on the other hand to have always clear in front of you the possibilities not yet explored for the product to evolve.

At the following address you will find a complete example of user stories created with the approach I propose, the one I referred to in the text:

The material is made available under CC-BY license, so it can also be used for commercial use as long as my name is mentioned as the author of the stories.

To learn more about the approach, you can reach me at: .