As Mixed Reality and HoloLens apps, in particular, become more mainstream, they become even more complex, and this is a reflection of their interfaces. And if in those user interfaces, we need to communicate something more complex to a user, the text is, in most cases, still the most efficient way of doing that.

Now, a floating text by itself may not be very readable. You might want to use some kind of backdrop. I usually take a kind of blueish background with white text, as that turns out to be the most readable. I know, it feels a bit 2D Windows-ish — but until someone comes up with a better paradigm, it will have to do.

A TextMesh in Unity does not have a clue about word wrapping or fitting into a specific 'box' — you need to do that yourself. There is some of that in the Mixed Reality Toolkit dialog system – but that wraps based on the maximum of characters. If you change the font size or the size of the backdrop, you will need to start testing again to see if your message fits. And, there is no need for that here.

This sits in an extension method of the TextUtilities class. It assumes that the text has already been applied to the text mesh. What is basically does is:

Now, I did not make that up myself; I nicked it from here in the Unity Forums, but I kind of simplified and optimized it a bit.

As I have written in a previous post, you can calculate an object's size by getting the Render's size. But, I also show what you get is the size after rotation. So, what you need to do is to calculate the unrotated size. I put the same trick as used in the way to measure the text width in an extension method:

Rotate the object to identify, get it's render's size, return the object back, then return the result. While this is a rather crude way to get to the size,  it seems to work. I stuck this method into my GameObjectExtensionsclass.

Connecting All the Dots

Now, the only thing missing is a behavior that will use all of this:

The start method immediately renders the game object invisible. Calling the ShowDialog makes the dialog visible and actually sets the text by calling the ShowTextDelayed coroutine, where the stuff is actually happening. First, we get the size of the backplate. Then, we calculate the desired width of the text. After that, the text is word-wrapped, and then it's moved half the calculated width to the left.

So, why the delay? This is because the complete dialog looks like this: 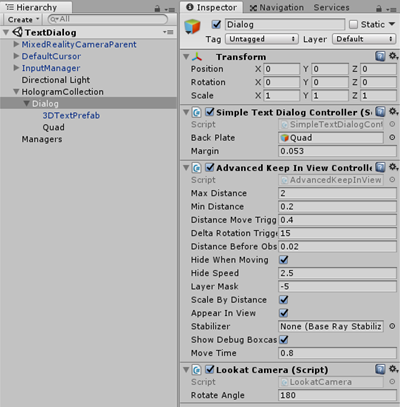 I reused the AdvancedKeepInViewController from my previous post. But, if you use the AppearInView property (as I do), that places the dialog's center exactly on the gaze cursor when it's activated. And, you will see that it tends to appear on the left of the center, then quickly moves to the center.

That is because when the text is rendered without the word wrap, it looks like this: 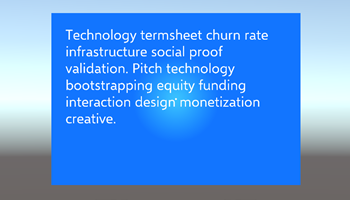 The text is nicely wrapped and fits inside the box. Hence, there is a little delay to allow the AdvancedKeepInViewController to calculate and place the object in the center before we start messing with the text.

Finally, there's a simple behavior called DialogLauncher,  but, basically, all that does is call the ShowDialogmethod with some text I got from "Startupsum."

The fun thing is that when you make the dialog bigger and run the app again, it will automatically word wrap to the new size:

And, when you increase the font size, it will look like this:

There are four requirements to the text:

It's actually possible to fix that too, but you might wonder how efficiently you are communicating if you need to write large texts in what is, in essence, an immersive experience. How many people read an entire six-paragraph text in a zoo or a museum? "Brevity is the soul of wit," as the Bard once said, so keep texts short and concise!

Thanks to Shopguy on the Unity Forums for the original word wrapping code. The code for this article can be found here.