Xamarin Forms is awesome. If you have learned XAML from WPF, Silverlight, Windows Phone, Universal Windows Apps or UWP, you can jump right in using the XAML you know (or at least something that looks remarkably familiar) and start to make apps that will run cross platform on iOS, Android, and UWP. So potentially your app can run not only on phones but also on XBox, HoloLens, and PCs.

One of the coolest things is the OnPlatform construct. For instance, you can have something like this:

This indicates the label that has this style applied to it should have a font size of 100 on Windows, 30 on Android, and 30 on iOS. In the demo project, I have defined some styles in the App.xaml, and the net result is that it looks like this on Android (top), iOS (middle) and Windows (bottom). 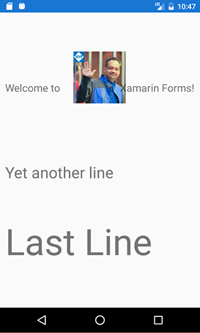 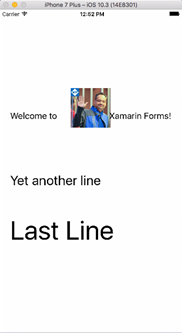 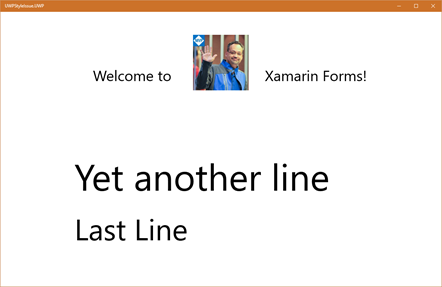 The result is not necessarily very beautiful, but if you look in the MainPage.xaml, you will see that everything has a style and no values are hard coded. You can also see that although the Android and iOS apps are mobile apps and the Windows app is essentially an app running on a tablet or a PC (the demarcation line between these is becoming hazier with each day), it will still work out using OnPlatform.

I have used various constructs. Apart from the inline construct as I showed above, there's also this one:

It's a construct I would very much recommend, as it enables you to reuse the ImageSize value for other things, for instance, the height of button, in another style. You can also use these doubles directly in XAML, like I did with SomeOtherTextFontSize in the last label in MainPage.xaml:

Although I do not recommend this practice - styles are much cleaner - sometimes needs must and this can be handy.

I can hear you think by now: "Your point please, kind sir?" (or most likely something less friendly). Well... it works great on Android, as you have seen. It also works great on iOS. And yes, on Windows too...

... until you think, "Let's get this puppy into the Windows Store." As every Windows Developer knows, if you compile for the Store, you compile for Release, which kicks off the .NET Native toolchain. This is very easy to spot as the compilation process takes much longer. The result is not Intermediary Language (IL), but binary code - an exe - which makes UWP apps so much faster than their predecessors. Unfortunately, it also means the release build is an entirely different beast than a debug build, which can have some unexpected side effects. In our application, if you run the Release build, you will end up with this. 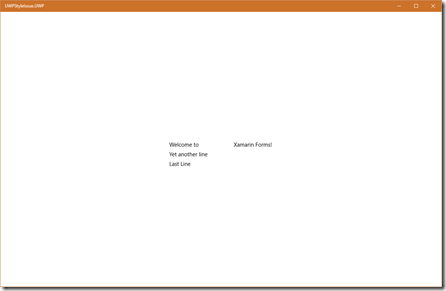 That is quite some "side effect." No margin to pull the first text up, no font size (just default), no image... WTF indeed.

Unfortunately, I had some issues with another library (FFImageLoading) which took me on the wrong track for quite a while, but after I had fixed that I noticed that when I changed the styles from OnPlatform to hard coded values, the styling started to work again - even in.NET Native. So if I did this:

At least my image showed up again: 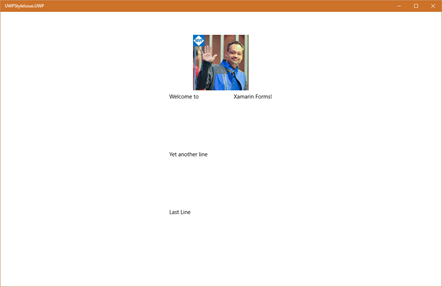 With a deadline looming and a ginormous style sheet in my app, I really had no time to make a branch with separate styles for Windows. We had to go to the store and we had to go now. Time for a cunning plan. I came up with this:

So it works when the styles do contain direct values, not OnPlatform, right...? If you look at App.xaml.cs in the portable project, you will see a line in the constructor that's usually not there, and it's commented out.

If you remove the slashes and run the app again in Release.... 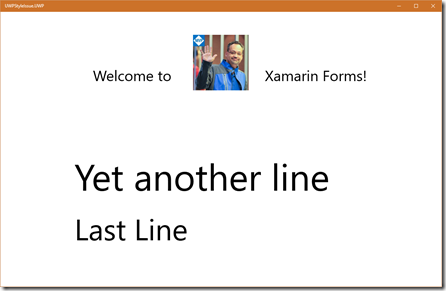 Magic happens. All styles seem to work again. This is because of an extension method that's in the file ApplicationExtensions, that you will find in the Portable project in de Extensions folder:

The first method, ConvertAllOnPlatformToExplict, does the following:

It's crude, it requires about everything to be in OnPlatform, but it does the trick. I am not going to write it all out here, it's not very great code, and you can see it all on GitHub anyway.

Then, for good measure, it calls ConvertAllOnDoubleToPlainDouble, which loops through the all the doubles, like

There is apparently a bug in the Xamarin Forms.NET Native UWP tooling, which causes OnPlatform values being totally ignored. With my dirty little trick, you can at least get your styles to work without having to rewrite the whole shebang for Windows or have a separate style file for it. Note that this does not fix everything- if you have other value types (like GridHeights), you will need to add your own conversion to ConvertAllOnPlatformToExplict. What I have given you was enough to fix my problems, but not all potential issues that may arise from this bug.

I hope this drives Xamarin for UWP adoption forward, and I also hope this helps the good folks in Redmond fix the bug. I've pretty much identified what goes wrong, now they "only" have to take of the how.

A demo project with the fix can be found here.