Many of you have been asked about tutorials and guides about how to use the new Spring Roo 2.0.0.M2 version and how to generate Spring Boot applications with it. For those who don’t know what the Spring Roo project is, I’ll try to explain it really quick:

Spring Roo is a development tool that provides all the necessary features to generate web applications quickly and easily. I can be used from STS (based on Eclipse IDE) or directly from your OS shell (Linux, Windows and OSx). Developers can execute some predefined commands that generates all the Java code you need to have a complete web application.

This new version (2.0.0.M2) of Spring Roo includes some new features like:

To get more details about all the new Spring Roo 2.0.0.M2 features, see the release note posted on the Spring Blog. If you are interested on get more information about the Spring Roo project visit its official project page.

Now that everyone knows what Spring Roo is, let’s start with this quick tutorial.

In this quick tutorial we are going to generate a basic Spring Boot application using Spring Roo 2.0.0.M2 from OS shell. Don’t worry if you are not familiar with the OS shell, this will be a really easy tutorial explained step by step. Also, in future tutorials I’ll explain to you how to configure your STS to include the Spring Roo shell.

The generated application will contain:

Remember that this will be a quick tutorial to show you how to generate Spring Boot applications using Spring Roo shell, so I’m not going to go deeper on the other components of the generated project (persistence, view layer, etc.). Just follow this tutorial to have a complete Spring Boot application and in future posts, I’ll explain you all about the other generated layers.

In this new version, Spring Roo generates Spring Boot applications by default. So, by executing the following command in the Spring Roo shell, a new Spring Boot project will be generated (remember that you can use TAB to autocomplete commands): 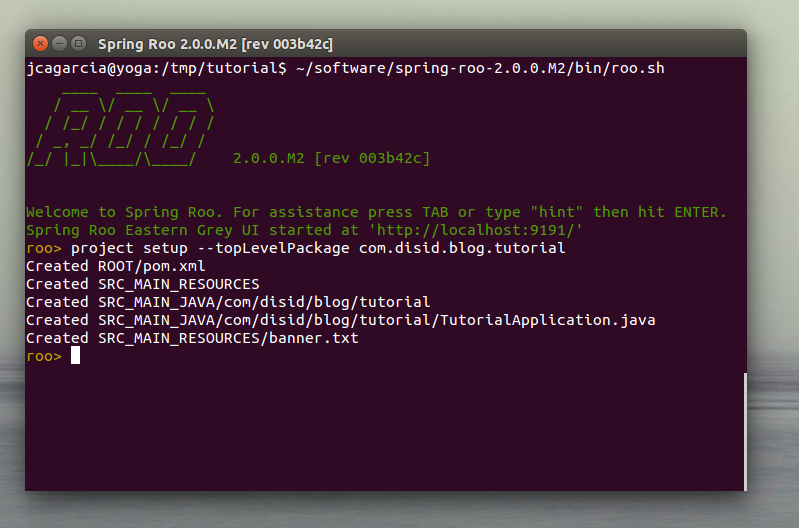 As you can see in the shell log, the following elements have been generated:

The basic structure of the generated project should look like:

The log.roo file contains all the executed commands in the Spring Roo shell. It will be updated everytime that you execute a new command that ends successfully. It’s really useful to know which commands have been executed before.

The TutorialApplication.java file is the class that contains the main method. It’s annotated with @SpringBootApplication and looks like this:

Finally, banner.txt file has been generated on resources folder. This banner will be displayed during application deployment. The appearance of the generated file should look like:

Now, we have a basic Spring Boot application that compiles without any problem using the Maven command mvn clean compile in our system shell (not in Spring Roo shell!!). But… we are not able to run this application because we haven't configured the presentation layer.

To be able to generate persistence using HIBERNATE and HYPERSONIC_IN_MEMORY database, you should execute the following command:

Create a New Entity and its Fields

Create a new entity called Owner and include the username and the email fields. You will be able to do this by executing the following commands:

Generate the service layer by executing the following command:

After executing all the commands above (don’t worry if you don’t understand some command or the generated code. I’ll explain it you in the next tutorial! :D), you should have a complete Spring Boot application.

If you want to run your generated application, you could do it by executing the following Maven command on your system shell (not in Spring Roo shell!!):

After some log messages in your system shell, your application will be deployed on an embedded Tomcat server. You should have access to http://localhost:8080/ link and see your generated application running:

What do you think about it?! Do you like it? We only had to execute some simple commands! :D

NOTE: The previous Maven command is available because the generated pom.xml file includes the spring-boot-maven-plugin.

Hope you enjoy with this new post and you learn more about the Spring Roo project and its new features!

If you have some comment or question, feel free to make it. See you soon!

Published at DZone with permission of Pilar Argudo. See the original article here.