Test reports are an integral part of any activity related to testing, whether it is automation testing or manual testing. Test reports help track how the activities related to automation testing have evolved over a period of time. The same principle also applies when using NUnit/xUNit/MSTest for automated browser testing. Of the lot, NUnit is the most-used test automation framework for all .Net languages. NUnit reports can serve as a considerable value addition to the tests performed using the said framework.

Let’s look at NUnit report generation and how seamlessly you can integrate the NUnit reporting tool in the test implementation. As far as Selenium C# is concerned, Extent and Allure are the preferred NUnit reporting tools. Both are third-party tools that have to be installed from the NuGet gallery, either from the Visual Studio UI or using the Package Manager Console commands.

Extent Report is a more popular NUnit report generator. By the end of this blog, you would be comfortable integrating Extent Reports in the Selenium C# test implementation. So, let’s get started.

In case you are using SpecFlow for automation testing with Selenium C#, you have the flexibility to integrate ExtentReports 4.x in the SpecFlow BDD tests for HTML test report generation. Extent Reports follows a freemium pricing approach, which essentially means that it is available in Community (or Free) and Pro (or Paid) Editions. As per the official documentation of ExtentReports, there are no differences in the underlying ExtentReports API. The community & pro users can leverage the advantage of features offered by full-featured APIs.

For the demonstration, we have used the Community Edition of ExtentReports 4.x.

There are several advantages of using Extent Reports; the major ones are below:

Extent Reports 4 is a significant upgrade over Extent Reports 3, as a lot of new features are introduced in version 4.x of ExtentReports.

In case you are currently using Extent Reports 3 as the NUnit reporting tool, you might want to upgrade to Extent Reports 4. In Extent Reports, vital related information like tests, nodes, events, and assignment of tags, devices, environment values, etc., can be printed to ‘multiple destinations.’ These destinations are referred to as ‘reporter.’

Here are the major feature upgrades in Extent Reports 4, most of which are also available for Community Edition of this NUnit report generator:

For migrating from ExtentReports 3 to ExtentReports 4, it is recommended to remove ChartLocation from the setup code as it is no longer available in Extent Reports 4.

How To Use Extent Reports With NUnit And Selenium WebDriver?

The Extent framework follows an Observer pattern where the reporter (e.g., ExtentHTMLReporter) attached to the framework becomes an ‘observer’ and is notified of changes like the creation of logs and logs, etc. Some of the notified changes result in content updation in the report. Though the Extent framework offers numerous capabilities, we would require only certain classes for report generation in NUnit.

Sneak Peek Of The Extent Framework For Report Generation

Here are the two major classes that are frequently used when creating NUnit report using the Extent framework:

We would be using the ExtentHtmlReporter method in the code as our demo will be with ExtentReports 4.

The ExtentHtmlReporter class is used for generating Extent Report in the HTML format in the path specified as the argument.

The ExtentReports class is primarily used for logging the test steps in the generated HTML report, the path of which was configured using the instance of the ExtentHtmlReporter class. 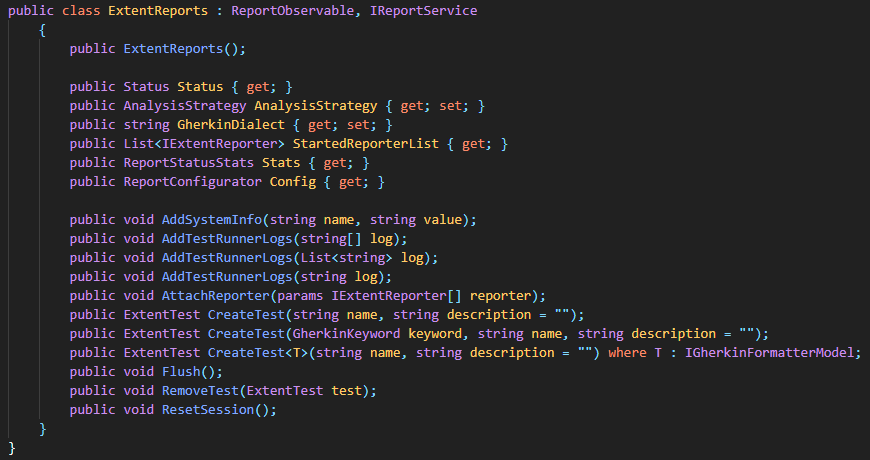 The AttachReporter method of the ExtentReports class is used for attaching the specified reporter.

The AddSystemInfo method is used for adding system or environment-related information to the report. This information is automatically added to the started reporters (i.e., ExtentHtmlReporter).

The Flush method writes (or updates) the specified reporter’s test information (i.e., Extent HTML Reporter) to the destination type. In most scenarios, the Flush method should be called only ‘once’ in the [OneTimeTearDown] attribute available in the NUnit framework.

The ExtentTest class contains methods for the following tasks:

When creating tests using the Gherkin instance, the Gherkin keyword can be directly passed in the CreateTest method.

The Log method of the ExtentTest class is used for logging the test status along with a description that needs to be printed on the resultant report. The commonly used statuses are Pass, Fail, and Skip. In totality, the following statuses are available:

The RemoveTest method is used to remove a test created using the CreateTest method or CreateNode method.

Screenshots serve as huge value addition in the NUnit test reports. Before ExtentReports 4, the traditional methodology for capturing page screenshots had to be used. With ExtentReports 4, you can add files and base64 snapshots to the tests.

The AddScreenCaptureFromPath method lets you add screenshots to the tests. The image is saved on the disk and referenced using the < img > attribute in the report. Screenshots can be added to the logs, irrespective of whether the test has passed or failed.

The Build method is used along with CreateScreenCaptureFromPath so that it returns a MediaEntityModelProvider.

We would be covering both the ways (traditional screenshot capturing mechanism and CreateScreenCaptureFromBase64String method in ExtentReports 4) for capturing page screenshots in the demonstration of this NUnit reporting tool.

Now that we have covered the capabilities of ExtentReports 4 as an NUnit report generator let’s look at how we can use Extent Reports with NUnit and Selenium.

For demonstrating generating Extent Reports in NUnit and Selenium WebDriver, we use the example shown in the Page Object Model Tutorial with Selenium C#.

Here is the test scenario and browser/OS combination on which the tests are executed:

To get started, we create a new NUnit test project by navigating to New -> Project -> NUnit Test Project (.Net Core).

Once the project is created, install the following packages using the Package Manager (PM) Console. Run the following commands on the PM console to install Selenium WebDriver, PageObjects, and other packages.

Run the following commands on the PM Console:

Here are the installation screenshots from the PM console:

The status of the installed packages is obtained using the Get-Package PM command:

The project structure should look as shown below: 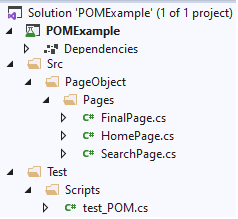 This is how the final project structure in Visual Studio 2019 looks like: 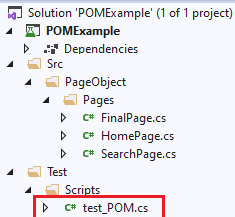 Import or add the ExtentReports related namespaces to the test code.

The TestFixture annotation (or attribute) is used for passing the browser and OS combinations to the test case.

The test scenario is tested in parallel on different browser and OS combinations. The Parallelizable annotation is used with the ParallelScope.All options for executing the tests and their descendants in parallel.

Variables of type ExtentReports and ExtentTest are created. These would be further used in creating the NUnit report.

The basic prerequisites for Extent Report creation are added under the [OneTimeSetUp] attribute. The method under this attribute will be called before executing any test in the fixture.

The GetCallingAssembly method returns the Assembly object of the method that has invoked ExtentStart (i.e., the currently executing method). The Uri .LocalPath converts the file path into a URI-style path.

The generated NUnit report will be stored in the Reports folder, and the report name is set to Index.html.

Start the ExtentHTMLReporter file in the location (i.e. reportPath) specified in the earlier step.

Create an instance of the ExtentReports class and enable (or start) the Extent HTML reporter using the AttachReporter method.

Necessary system or environment-related information is added using the AddSystemInfo method to the started HTML reporter.

The TestContext class in NUnit lets tests access information about the execution context. The CurrentContext property of TestContext class is used for getting the context of the currently executing test (i.e., SearchLT_Google). The test case’s name is appended with the browser name, browser version, and platform to differentiate the tests executing on different browser & OS combinations.

The remaining part of the implementation under the [Test] attribute is POM related, for which you can refer to the POM in Selenium C# blog.

The execution status of the test scenario is obtained using the Result property in the current context.

For demonstration, we capture the page screenshot even for the PASS scenario. The filename will be a combination of the test case name, browser & OS combination, and timestamp when the snapshot was generated.

Based on the execution status (i.e., Passed, Failed, Skipped, etc.) of the test scenario, the next set of actions are performed. For demonstration, we capture screenshots in the Extent report for TestStatus.Passed and TestStatus.Failed statuses.

The screenshots of AUT are captured using two different methods (only for demonstration):

We’ll be covering how to capture screenshots in NUnit using Extent Reports in more detail in the subsequent section.

The Flush method of ExtentReports writes everything to the log file (or HTML report). It is called only ‘once’ in the [OneTimeTearDown] method. The report will not be generated if Flush is not called.

How to Capture Screenshots in NUnit Extent Report?

Here are the two ways to capture screenshots in Extent Report:

Here we capture a screenshot of the application under test using the GetScreenshot method of the ITakesScreenshot interface. Here is the complete implementation for capturing screenshot:

a. A variable (i.e., ts) of type ITakesScreenshot is created, and the type-casted WebDriver instance is assigned to it.

b. The GetScreenshot method in ITakesScreenshot returns the screenshot object that represents the image of the page on the screen.

c. The next set of steps create a sub-directory named Screenshots in the Reports directory where the final HTML report will be stored.

d. The SaveAsFile method in Screenshot class (i.e., Screenshot.SaveAsFile) saves the screenshot to a file. It overwrites if the file already exists in that particular location. The method takes two arguments – the location where the image will be stored and ScreenshotImageFormat (which is png in our case).

In our case, the same test is executed in parallel across different browser and OS combinations. Hence, the image name includes the test name, browser(and OS combination), & timestamp when the corresponding test was executed.

Usage: This is how the Capture method is invoked in the test code for saving screenshot on the local disk and adding the same to the HTML report.

Here we capture a screenshot of the application under test in the base64 string format using the CreateScreenCaptureFromBase64String method in Extent Reports 4. Here is the complete implementation for capturing screenshot:

a. A variable (i.e., ts) of type ITakesScreenshot is created, and the type-casted WebDriver instance is assigned to it.

Usage: This is how the CaptureScreenShot method is invoked in the test code for adding base64 screenshots to logs.

As shown below, the test scenario (SearchLT_Google) is run against different browser and OS combinations in parallel.

As seen below, the tests have executed successfully.

Shown below is the Extent Report snapshot (taken from the report file) generated for the tests:

Reports play an integral part in keeping track of the test execution. Extent Report is used as a preferred NUnit reporting tool since the Extent Framework lets you generate customizable HTML test reports. The NUnit report generated using the Extent Framework provides insightful information about the tests, environment values, devices against which tests were conducted, and more. It also lets you create Gherkin-style tests, due to which Extent Reports can be used as an NUnit report generator for BDD tests. In particular, Extent Reports 4 has several new features like the simplified generation of base64 screenshots to be added to the logs, selecting a Gherkin dialect, etc.

Which NUnit reporting tool do you use for your Selenium tests? Do leave your preference in the comments section below.