Testing a web page can be a gargantuan task, considering all the elements and variables that come together to make a page work. Selenium automation is a great way to overcome these challenges and automate everything you would manually do. For example, Selenium makes it so much easier to take a screenshot using Python instead of doing it manually every time you come across a website issue.

Similarly, there are multiple scenarios while writing automation test cases when we need to verify a specific attribute on the web page. To ease our execution, the method to getAttribute() in Selenium comes to the rescue. In this blog, we will understand what an attribute is and how we can handle web elements’ attributes using the Selenium getAttribute() method.

What Is An Attribute?

An attribute in HTML defines the properties of the element. Attributes are made up of name-value pairs, i.e., an attribute has a name and the corresponding value of the same. They are specified in the opening tag, and their values are enclosed in double-quotes. Some of the examples of HTML attributes are:

As you can see above, the HTML tags have different attributes and corresponding values; similarly, the input tag has multiple attributes like style, class, type, placeholder, name, and id. Corresponding to each attribute, there is a value in double-quotes: viz, height:40px; width:300px; form-control newsletter_email; text; your@email.com; email and address respectively.

Now that you know all about an attribute for an HTML web element and what it looks like, let us see how we can fetch the attribute values with the help of getAttribute() in Selenium WebDriver.

Using getAttribute() In Selenium: What, Why and How?

getAttribute() is a method of IWebElement Interface. The IWebElement interface helps in performing all the interactions or operations on the web page elements. The getAttribute() method helps to get the value of any attribute of a web element, which is returned as a String.

If an attribute has a Boolean value, the method returns either True or null. Also, if there is no attribute, the method will return null. We will see all the different attributes and the values that they return in a while, but let us see why we need to use the getAttribute() method before jumping to that part.

Consider a scenario where you need to verify the placeholder text on an input field or maybe the image source or even the field’s dimensions. This is where the getAttribute() method comes to the rescue. You just have to find the web element that contains the attribute and use the getAttribute() method to find its value. Below is a simple line of code that you will have to write-

In the next section, we will see a working example of fetching the attribute values using the getAttribute() method.

How To Use Selenium getAttribute()

Now that we have seen the basic syntax of using the getAttribute() method, we will see a working example of fetching values using getAttribute(). We will use a dummy website to write a basic test script. Without further adieu, let us quickly see the use case and then proceed with the code.

Let us now see how the code for the above use case would look like:

Let us now do a quick walkthrough of the above code:

On executing the above code you will see the result in the console output like below:

As is clearly visible from the test results, the src value for the image is printed on the console window. Next, the placeholder value matches the expected value, and the corresponding success result is printed on the console window. Finally, the value for the attribute that is not present is displayed as blank or null because no attribute name as specified in the test script for the login button is present.

Did you see how easy it was to implement the getAttribute() in the Selenium test script? You can use this method as per your requirements to validate a certain functionality of our web application.

getText() vs getAttribute() vs getCssValue()

While going out on interviews, one of the most frequently asked questions on Selenium automation is stating the differences between various Selenium methods, viz, getText(), getAttribute(), and getCssValue().

getText() is used to get the visible inner text of a web element and the sub elements. By visible, we mean that the text which is not hidden by CSS. You can refer to more about the getText() method from our article on how to get the text of an element in Selenium.

getAttribute(String attributeName), as discussed above, is used to fetch the attribute value of an HTML tag of the web element. There are multiple attributes like style, src, placeholder, href, etc. which are passed as a string parameter to the method. The value corresponding to the parameter is returned.

We now know how we can use the Selenium getAttribute() method to fetch web element properties. Next, we will see how we can leverage LambdaTest’s Selenium Grid cloud to run tests in parallel and get the test results by a single execution.

We will execute this case on the LambdaTest grid to see how the execution results are generated. Subsequently, you can run tests across parallel browsers by referring to our article on using Selenium Grid for automated browser testing for further understanding.

The code for the same outcome would look like this:

You will see the execution results under the Automation tab of your LambdaTest dashboard on running the above test. 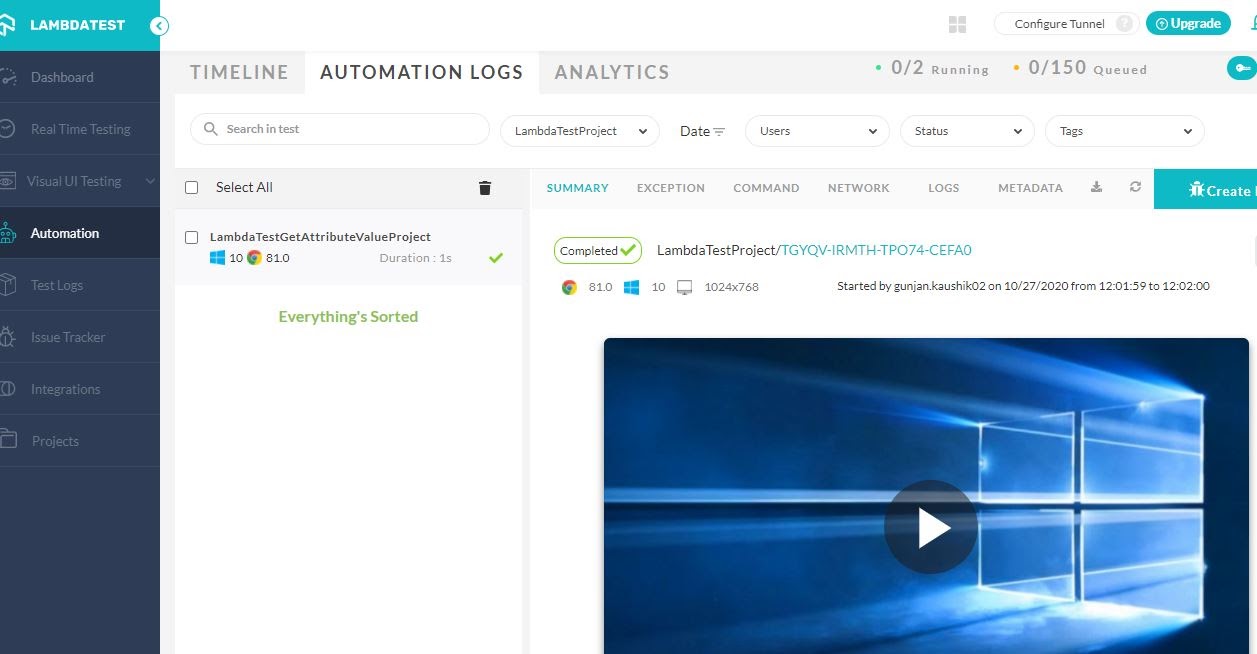 You can also see the placeholder value is printed in the Eclipse console window, indicating that our getAttribute() method fetched the correct results.

Now you can smoothly run your Selenium automation tests on the LambdaTest Grid for enhanced parallel execution along with extensive support for report generation.

In this blog, we accomplished the following:

Finally, we implemented getAttribute() in the Selenium Grid cloud offered by LambdaTest. It is safe to say that getAttribute() is pivotal to Selenium test automation, especially when it comes to fetching and interacting with specific web elements.

Published at DZone with permission of Ritesh Shetty. See the original article here.